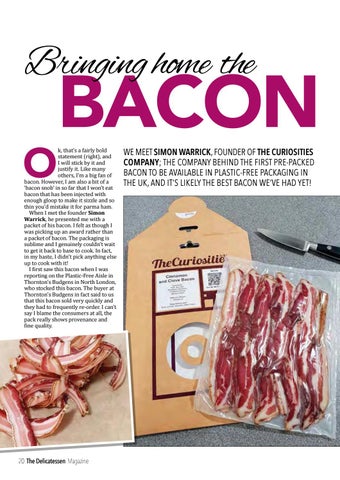 k, that’s a fairly bold statement (right), and I will stick by it and justify it. Like many others, I’m a big fan of bacon. However, I am also a bit of a ‘bacon snob’ in so far that I won’t eat bacon that has been injected with enough gloop to make it sizzle and so thin you’d mistake it for parma ham. When I met the founder Simon Warrick, he presented me with a packet of his bacon. I felt as though I was picking up an award rather than a packet of bacon. The packaging is sublime and I genuinely couldn’t wait to get it back to base to cook. In fact, in my haste, I didn’t pick anything else up to cook with it! I first saw this bacon when I was reporting on the Plastic-Free Aisle in Thornton’s Budgens in North London, who stocked this bacon. The buyer at Thornton’s Budgens in fact said to us that this bacon sold very quickly and they had to frequently re-order. I can’t say I blame the consumers at all, the pack really shows provenance and fine quality.

WE MEET SIMON WARRICK, FOUNDER OF THE CURIOSITIES COMPANY; THE COMPANY BEHIND THE FIRST PRE-PACKED BACON TO BE AVAILABLE IN PLASTIC-FREE PACKAGING IN THE UK, AND IT’S LIKELY THE BEST BACON WE’VE HAD YET!