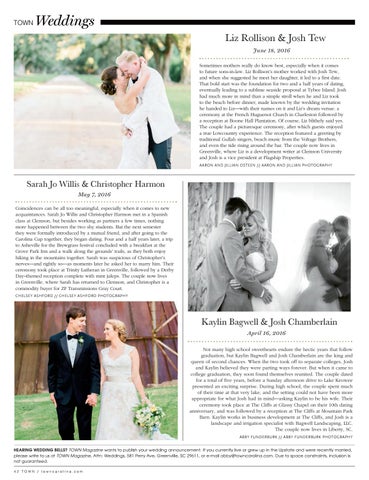 Weddings Liz Rollison & Josh Tew June 18, 2016 Sometimes mothers really do know best, especially when it comes to future sons-in-law. Liz Rollison’s mother worked with Josh Tew, and when she suggested he meet her daughter, it led to a first date. That bold start was the foundation for two and a half years of dating, eventually leading to a sublime seaside proposal at Tybee Island. Josh had much more in mind than a simple stroll when he and Liz took to the beach before dinner, made known by the wedding invitation he handed to Liz—with their names on it and Liz’s dream venue: a ceremony at the French Huguenot Church in Charleston followed by a reception at Boone Hall Plantation. Of course, Liz blithely said yes. The couple had a picturesque ceremony, after which guests enjoyed a true Lowcountry experience. The reception featured a greeting by traditional Gullah singers, beach music from the Voltage Brothers, and even the tide rising around the bar. The couple now lives in Greenville, where Liz is a development writer at Clemson University and Josh is a vice president at Flagship Properties. AARON AND JILLIAN OSTEEN // AARON AND JILLIAN PHOTOGRAPHY

Sarah Jo Willis & Christopher Harmon May 7, 2016 Coincidences can be all too meaningful, especially when it comes to new acquaintances. Sarah Jo Willis and Christopher Harmon met in a Spanish class at Clemson, but besides working as partners a few times, nothing more happened between the two shy students. But the next semester they were formally introduced by a mutual friend, and after going to the Carolina Cup together, they began dating. Four and a half years later, a trip to Asheville for the Brewgrass festival concluded with a breakfast at the Grove Park Inn and a walk along the grounds’ trails, as they both enjoy hiking in the mountains together. Sarah was suspicious of Christopher’s nerves—and rightly so—as moments later he asked her to marry him. Their ceremony took place at Trinity Lutheran in Greenville, followed by a Derby Day–themed reception complete with mint juleps. The couple now lives in Greenville, where Sarah has returned to Clemson, and Christopher is a commodity buyer for ZF Transmissions Gray Court. CHELSEY ASHFORD // CHELSEY ASHFORD PHOTOGRAPHY

Kaylin Bagwell & Josh Chamberlain April 16, 2016 Not many high school sweethearts endure the hectic years that follow graduation, but Kaylin Bagwell and Josh Chamberlain are the king and queen of second chances. When the two took off to separate colleges, Josh and Kaylin believed they were parting ways forever. But when it came to college graduation, they soon found themselves reunited. The couple dated for a total of five years, before a Sunday afternoon drive to Lake Keowee presented an exciting surprise. During high school, the couple spent much of their time at that very lake, and the setting could not have been more appropriate for what Josh had in mind—asking Kaylin to be his wife. Their ceremony took place at The Cliffs at Glassy Chapel on their 10th dating anniversary, and was followed by a reception at The Cliffs at Mountain Park Barn. Kaylin works in business development at The Cliffs, and Josh is a landscape and irrigation specialist with Bagwell Landscaping, LLC. The couple now lives in Liberty, SC. ABBY FUNDERBURK // ABBY FUNDERBURK PHOTOGRAPHY HEARING WEDDING BELLS? TOWN Magazine wants to publish your wedding announcement. If you currently live or grew up in the Upstate and were recently married, please write to us at TOWN Magazine, Attn: Weddings, 581 Perry Ave, Greenville, SC 29611, or e-mail abby@towncarolina.com. Due to space constraints, inclusion is not guaranteed. 42 TOWN / towncarolina.com