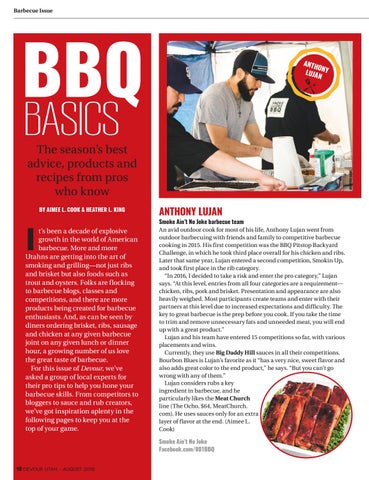 t’s been a decade of explosive growth in the world of American barbecue. More and more Utahns are getting into the art of smoking and grilling—not just ribs and brisket but also foods such as trout and oysters. Folks are flocking to barbecue blogs, classes and competitions, and there are more products being created for barbecue enthusiasts. And, as can be seen by diners ordering brisket, ribs, sausage and chicken at any given barbecue joint on any given lunch or dinner hour, a growing number of us love the great taste of barbecue. For this issue of Devour, we’ve asked a group of local experts for their pro tips to help you hone your barbecue skills. From competitors to bloggers to sauce and rub creators, we’ve got inspiration aplenty in the following pages to keep you at the top of your game.

The season’s best advice, products and recipes from pros who know ANTHONY LUJAN

Smoke Ain’t No Joke barbecue team An avid outdoor cook for most of his life, Anthony Lujan went from outdoor barbecuing with friends and family to competitive barbecue cooking in 2015. His first competition was the BBQ Pitstop Backyard Challenge, in which he took third place overall for his chicken and ribs. Later that same year, Lujan entered a second competition, Smokin Up, and took first place in the rib category. “In 2016, I decided to take a risk and enter the pro category,” Lujan says. “At this level, entries from all four categories are a requirement— chicken, ribs, pork and brisket. Presentation and appearance are also heavily weighed. Most participants create teams and enter with their partners at this level due to increased expectations and difficulty. The key to great barbecue is the prep before you cook. If you take the time to trim and remove unnecessary fats and unneeded meat, you will end up with a great product.” Lujan and his team have entered 15 competitions so far, with various placements and wins. Currently, they use Big Daddy Hill sauces in all their competitions. Bourbon Blues is Lujan’s favorite as it “has a very nice, sweet flavor and also adds great color to the end product,” he says. “But you can’t go wrong with any of them.” Lujan considers rubs a key ingredient in barbecue, and he particularly likes the Meat Church line (The Ocho, $64, MeatChurch. com). He uses sauces only for an extra layer of flavor at the end. (Aimee L. Cook) Smoke Ain’t No Joke Facebook.com/801BBQ 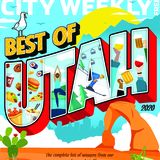