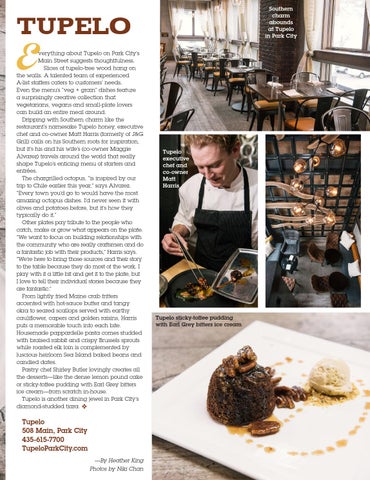 verything about Tupelo on Park City’s Main Street suggests thoughtfulness. Slices of tupelo-tree wood hang on the walls. A talented team of experienced A-list staffers caters to customers’ needs. Even the menu’s “veg + grain” dishes feature a surprisingly creative collection that vegetarians, vegans and small-plate lovers can build an entire meal around. Dripping with Southern charm like the restaurant’s namesake Tupelo honey, executive chef and co-owner Matt Harris (formerly of J&G Grill) calls on his Southern roots for inspiration, but it’s his and his wife’s (co-owner Maggie Alvarez) travels around the world that really shape Tupelo’s enticing menu of starters and entrées. The chargrilled octopus, “is inspired by our trip to Chile earlier this year,” says Alvarez. “Every town you’d go to would have the most amazing octopus dishes. I’d never seen it with olives and potatoes before, but it’s how they typically do it.” Other plates pay tribute to the people who catch, make or grow what appears on the plate. “We want to focus on building relationships with the community who are really craftsmen and do a fantastic job with their products,” Harris says. “We’re here to bring those sources and their story to the table because they do most of the work. I play with it a little bit and get it to the plate, but I love to tell their individual stories because they are fantastic.” From lightly fried Maine crab fritters accented with hot-sauce butter and tangy okra to seared scallops served with earthy cauliflower, capers and golden raisins, Harris puts a memorable touch into each bite. Housemade pappardelle pasta comes studded with braised rabbit and crispy Brussels sprouts while roasted elk loin is complemented by luscious heirloom Sea Island baked beans and candied dates. Pastry chef Shirley Butler lovingly creates all the desserts—like the dense lemon pound cake or sticky-toffee pudding with Earl Grey bitters ice cream—from scratch in-house. Tupelo is another dining jewel in Park City’s diamond-studded tiara. ❖

It's time to Create

It's time to Create