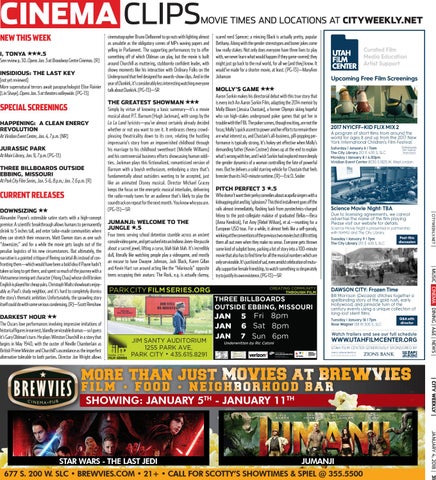 MOVIE TIMES AND LOCATIONS AT CITYWEEKLY.NET

THE GREATEST SHOWMAN BBB Simply by virtue of knowing a basic summary—it’s a movie musical about P.T. Barnum (Hugh Jackman), with songs by the La La Land lyricists—you’ve almost certainly already decided whether or not you want to see it. It embraces cheesy crowdpleasing theatricality down to its core, relating the hustling impressario’s story from an impoverished childhood through his marriage to his childhood sweetheart (Michelle Williams) and his controversial business efforts showcasing human oddities. Jackman plays this fictionalized, romanticized version of Barnum with a boyish enthusiasm, embodying a story that’s fundamentally about outsiders wanting to be accepted, just like an animated Disney musical. Director Michael Gracey keeps the focus on the energetic musical interludes, delivering the radio-ready tunes for an audience that’s likely to play the soundtrack on repeat for the next month. You know who you are. (PG-13)—SR

MOLLY’S GAME BBB Aaron Sorkin makes his directorial debut with this true story that is every inch An Aaron Sorkin Film, adapting the 2014 memoir by Molly Bloom (Jessica Chastain), a former Olympic skiing hopeful who ran high-stakes underground poker games that got her in trouble with the FBI. The poker scenes, though exciting, are not the focus; Molly’s quick ascent to power and her efforts to remain there are what interest us, and Chastain’s all-business, pill-popping performance is typically strong. It’s hokey yet effective when Molly’s demanding father (Kevin Costner) shows up at the end to explain what’s wrong with her, and I wish Sorkin had explored more deeply the gender dynamics of a woman controlling the fate of powerful men. But he delivers a solid starring vehicle for Chastain that feels breezier than its 140-minute runtime. (R)—Eric D. Snider PITCH PERFECT 3 B.5 Who doesn’t want their perky comedies about acapella singers with a kidnapping plot and big ’splosions? This third installment goes off the rails almost immediately, flashing back from pyrotechnics-charged felony to the post-collegiate malaise of graduated Bellas—Beca (Anna Kendrick), Fat Amy (Rebel Wilson), et al.—reuniting for a European USO tour. For a while, it almost feels like a self-parody, winking at the conventions of the previous two movies but still trotting them all out even when they make no sense. Everyone gets thrown some kind of subplot bone, packing a lot of story into a 100-minute movie that also has to find time for all the musical numbers which are only serviceable. It’s just kind of sad, even amidst celebration of mutually supportive female friendship, to watch something so desperately try to justify its own existence. (PG-13)—SR

DARKEST HOUR BB The Oscars love performances involving impressive imitations of historical figures in earnest, blandly serviceable dramas—so I guess it’s Gary Oldman’s turn. He plays Winston Churchill in a story that begins in May 1940, with the ouster of Neville Chamberlain as British Prime Minister and Churchill’s ascendance as the imperfect alternative tolerable to both parties. Director Joe Wright allows

more than just movies at brewvies

JUMANJI: WELCOME TO THE JUNGLE B.5 Four teens serving school detention stumble across an ancient console video game, and get sucked into an Indiana Jones-lite puzzle about a sacred jewel, lifting a curse, blah blah blah. It’s incredibly dull, literally like watching people play a videogame, and mostly an excuse to have Dwayne Johnson, Jack Black, Karen Gillan and Kevin Hart run around acting like the “hilariously” opposite teens occupying their avatars: The Rock, e.g. is actually clumsy,

scared nerd Spencer; a mincing Black is actually pretty, popular Bethany. Along with the gender stereotypes and boner jokes come low really stakes: Not only does everyone have three lives to play with, we never learn what would happen if they game-overed; they might just go back to the real world, for all we (and they) know. It would’ve made for a shorter movie, at least. (PG-13)—MaryAnn Johanson

DOWNSIZING BB Alexander Payne’s ostensible satire starts with a high-concept premise: A scientific breakthrough allows humans to permanently shrink to 5 inches tall, and enter tailor-made communities where they can stretch their resources. Matt Damon stars as one such “downsizer,” and for a while the movie gets laughs out of the peculiar logistics of his new circumstances. But ultimately, the narrative is a pointed critique of fleeing societal ills instead of confronting them—which would have been a bold idea if Payne hadn’t taken so long to get there, and spent so much of the journey with a Vietnamese immigrant character (Hong Chau) whose shrill broken English is played for cheap yuks. Christoph Waltz showboats enjoyably as Paul’s shady neighbor, and it’s hard to completely dismiss the story’s thematic ambition. Unfortunately, the sprawling story itself could do with some serious condensing. (R)—Scott Renshaw

cinematographer Bruno Delbonnel to go nuts with lighting almost as unsubtle as the obligatory scenes of MPs waving papers and yelling in Parliament. The supporting performances try to offer something off of which Oldman can play, but the movie is built around Churchill as muttering, stubbornly confident leader, with showy moments like his interaction with Ordinary Folks on the Underground that feel designed for awards-show clips. And in the year of Dunkirk, it’s considerably less interesting watching everyone talk about Dunkirk. (PG-13)—SR