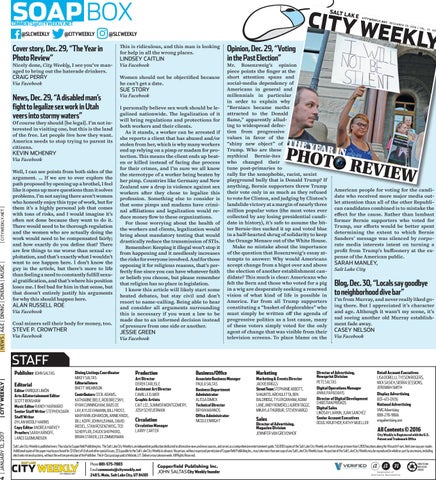 This is ridiculous, and this man is looking for help in all the wrong places.

Women should not be objectified because he can’t get a date.

Nicely done, City Weekly, I see you’ve managed to bring out the haterade drinkers. Via Facebook

Of course they should [be legal]. I’m not interested in visiting one, but this is the land of the free. Let people live how they want. America needs to stop trying to parent its citizens.

Well, I can see points from both sides of the argument. ... If we are to ever explore the path proposed by opening up a brothel, I feel like it opens up more questions than it solves problems. I’m not saying there aren’t women who honestly enjoy this type of work, but for them it’s a highly personal job that comes with tons of risks, and I would imagine it’s often not done because they want to do it. There would need to be thorough regulation and the women who are actually doing the work would need to be compensated fairly; and how exactly do you define that? There are few things to me worse than sexual exploitation, and that’s exactly what I wouldn’t want to see happen here. I don’t know the guy in the article, but there’s more to life than feeling a need to constantly fulfill sexual gratification, and that’s where his position loses me. I feel bad for him in that sense, but that doesn’t entirely justify his arguments for why this should happen here.

Coal miners sell their body for money, too.

I personally believe sex work should be legalized nationwide. The legalization of it will bring regulations and protections for both workers and their clients. As it stands, a worker can be arrested if she reports a client that has abused and/or stolen from her, which is why many workers end up relying on a pimp or madam for protection. This means the client ends up beaten or killed instead of facing due process for their crimes, and I’m sure we all know the stereotype of a worker being beaten by her pimp. Countries like Germany and New Zealand saw a drop in violence against sex workers after they chose to legalize this profession. Something else to consider is that some pimps and madams have criminal affiliations and legalization would reduce money flow to these organizations. For those worrying about the health of the workers and clients, legalization would bring about mandatory testing that would drastically reduce the transmission of STIs. Remember: Keeping it illegal won’t stop it from happening and it needlessly increases the risks for everyone involved. And for those opposing it for religious reasons, that’s perfectly fine since you can have whatever faith or beliefs you choose, but please remember that religion has no place in legislation. I know this article will likely start some heated debates, but stay civil and don’t resort to name-calling. Being able to hear and consider all arguments surrounding this is necessary if you want a law to be made due to an informed decision instead of pressure from one side or another.

Opinion, Dec. 29, “Voting in the Past Election”

Mr. Rosenzweig’s opinion piece points the finger at the short attention spans and social-media dependency of Americans in general and millennials in particular in order to explain why “Berniacs became moths attracted to the Donald flame,” apparently alluding to widespread defection from progressive values in favor of the “shiny new object” of Trump. Who are these mythical Bernie-ites who changed their tune post-primaries to rally for the xenophobic, racist, sexist playground bully that is Donald Trump? If anything, Bernie supporters threw Trump their vote only in as much as they refused to vote for Clinton, and judging by Clinton’s landslide victory at a margin of nearly three million popular votes (the most votes ever collected by any losing presidential candidate in history), it’s safe to assume the bitter Bernie-ites sucked it up and voted blue in a half-hearted shrug of solidarity to keep the Orange Menace out of the White House. Make no mistake about the importance of the question that Rosenzweig’s essay attempts to answer: Why would Americans accept change from a bigot over and above the election of another establishment candidate? This much is clear: Americans who felt the Bern and those who voted for a pig in a wig are desperately seeking a renewed vision of what kind of life is possible in America. Far from all Trump supporters constituting a “basket of deplorables” who must simply be written off the agenda of progressive politics as a lost cause, many of these voters simply voted for the only agent of change that was visible from their television screens. To place blame on the

American people for voting for the candidate who received more major media outlet attention than all of the other Republican candidates combined is to mistake the effect for the cause. Rather than lambast former Bernie supporters who voted for Trump, our efforts would be better spent determining the extent to which Bernie Sanders’ message was silenced by corporate media interests intent on turning a profit from Trump’s buffoonery at the expense of the American public.

I’m from Murray, and never really liked going there. But I appreciated it’s character and age. Although it wasn’t my scene, it’s sad seeing another old Murray establishment fade away.

City Weekly is Registered with the U.S. Patent and Trademark Office