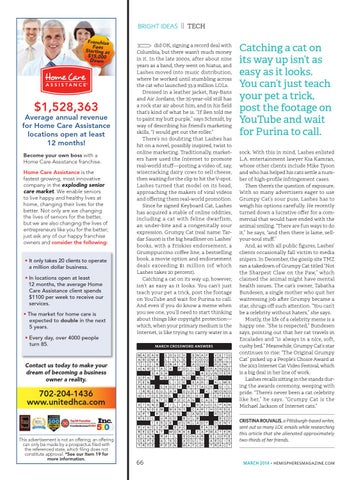 did OK, signing a record deal with Columbia, but there wasn’t much money in it. In the late 2000s, after about nine years as a band, they went on hiatus, and Lashes moved into music distribution, where he worked until stumbling across the cat who launched 33.9 million LOLs. Dressed in a leather jacket, Ray-Bans and Air Jordans, the 35-year-old still has a rock star air about him, and in his ﬁeld that’s kind of what he is. “If Ben told me to paint my bu purple,” says Schmidt, by way of describing his friend’s marketing skills, “I would get out the roller.” There’s no doubting that Lashes has hit on a novel, possibly inspired, twist to online marketing. Traditionally, marketers have used the Internet to promote real-world stuﬀ—posting a video of, say, wisecracking dairy cows to sell cheese, then waiting for the clip to hit the V-spot. Lashes turned that model on its head, approaching the makers of viral videos and oﬀering them real-world promotion. Since he signed Keyboard Cat, Lashes has acquired a stable of online oddities, including a cat with feline dwarfism, an under-bite and a congenitally sour expression. Grumpy Cat (real name: Tardar Sauce) is the big headliner on Lashes’ books, with a Friskies endorsement, a Grumppuccino coﬀee line, a bestselling book, a movie option and endorsement deals exceeding $1 million (of which Lashes takes 20 percent). Catching a cat on its way up, however, isn’t as easy as it looks. You can’t just teach your pet a trick, post the footage on YouTube and wait for Purina to call. And even if you do know a meme when you see one, you’ll need to start thinking about things like copyright protection— which, when your primary medium is the Internet, is like trying to carry water in a

Contact us today to make your dream of becoming a business owner a reality.

This advertisement is not an offering; an offering can only be made by a prospectus filed with the referenced state, which filing does not constitute approval. *See our Item 19 for more information.

Catching a cat on its way up isn’t as easy as it looks. You can’t just teach your pet a trick, post the footage on YouTube and wait for Purina to call. sock. With this in mind, Lashes enlisted L.A. entertainment lawyer Kia Kamran, whose other clients include Mike Tyson and who has helped his cats se le a number of high-proﬁle infringement cases. Then there’s the question of exposure. With so many advertisers eager to use Grumpy Cat’s sour puss, Lashes has to weigh his options carefully. He recently turned down a lucrative oﬀer for a commercial that would have ended with the animal smiling. “There are fun ways to do it,” he says, “and then there is lame, sellyour-soul stuﬀ.” And, as with all public ﬁgures, Lashes’ clients occasionally fall victim to media snipers. In December, the gossip site TMZ ran a takedown of Grumpy Cat titled “Not the Sharpest Claw on the Paw,” which claimed the animal might have mental health issues. The cat’s owner, Tabatha Bundesen, a single mother who quit her waitressing job a er Grumpy became a star, shrugs oﬀ such a ention. “You can’t be a celebrity without haters,” she says. Mostly, the life of a celebrity meme is a happy one. “She is respected,” Bundesen says, pointing out that her cat travels in Escalades and “is always in a nice, soft, cushy bed.” Meanwhile, Grumpy Cat’s star continues to rise: “The Original Grumpy Cat” picked up a People’s Choice Award at the 2013 Internet Cat Video Festival, which is a big deal in her line of work. Lashes recalls si ing in the stands during the awards ceremony, weeping with pride. “There’s never been a cat celebrity like her,” he says. “Grumpy Cat is the Michael Jackson of Internet cats.” CRISTINA ROUVALIS, a Pittsburgh-based writer, sent out so many LOL emails while researching this article that she alienated approximately two-thirds of her friends.