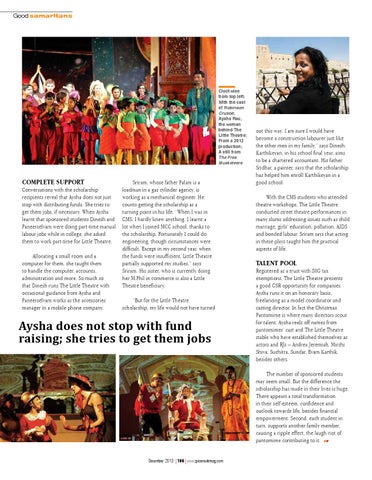 Clockwise from top left: With the cast of Robinson Crusoe; Aysha Rau, the woman behind The Little Theatre; From a 2012 production; A still from The Free Musketeers

Complete support Conversations with the scholarship recipients reveal that Aysha does not just stop with distributing funds. She tries to get them jobs, if necessary. When Aysha learnt that sponsored students Dinesh and Paneerselvam were doing part-time manual labour jobs while in college, she asked them to work part-time for Little Theatre. Allocating a small room and a computer for them, she taught them to handle the computer, accounts, administration and more. So much so that Dinesh runs The Little Theatre with occasional guidance from Aysha and Paneerselvam works as the accessories manager in a mobile phone company.

Sriram, whose father Palani is a loadman in a gas cylinder agency, is working as a mechanical engineer. He counts getting the scholarship as a turning point in his life. “When I was in CMS, I hardly knew anything. I learnt a lot when I joined MCC school, thanks to the scholarship. Fortunately I could do engineering, though circumstances were difficult. Except in my second year, when the funds were insufficient, Little Theatre partially supported my studies,” says Sriram. His sister, who is currently doing her M.Phil in commerce is also a Little Theatre beneficiary. “But for the Little Theatre scholarship, my life would not have turned

Aysha does not stop with fund raising; she tries to get them jobs

out this way. I am sure I would have become a construction labourer just like the other men in my family,” says Dinesh. Karthikeyan, in his school final year, aims to be a chartered accountant. His father Sridhar, a painter, says that the scholarship has helped him enroll Karthikeyan in a good school. With the CMS students who attended theatre workshops, The Little Theatre conducted street theatre performances in many slums addressing issues such as child marriage, girls’ education, pollution, AIDS and bonded labour. Sriram says that acting in these plays taught him the practical aspects of life.

Talent pool Registered as a trust with 80G tax exemptions, The Little Theatre presents a good CSR opportunity for companies. Aysha runs it on an honorary basis, freelancing as a model coordinator and casting director. In fact the Christmas Pantomime is where many directors scout for talent. Aysha reels off names from pantomimes’ cast and The Little Theatre stable who have established themselves as actors and RJs – Andrea Jeremiah, Mirchi Shiva, Suchitra, Sundar, Evam Karthik, besides others. The number of sponsored students may seem small. But the difference the scholarship has made in their lives is huge. There appears a total transformation in their self-esteem, confidence and outlook towards life, besides financial empowerment. Second, each student in turn, supports another family member, causing a ripple effect, the laugh riot of pantomime contributing to it.