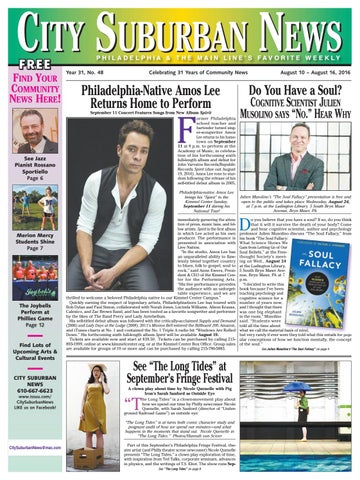 Philadelphia-Native Amos Lee Returns Home to Perform September 11 Concert Features Songs from New Album Spirit ormer Philadel phia school teacher and bartender turned singer-songwriter Amos Lee returns to his hometown on September 11 at 8 p.m. to perform at the Academy of Music, in celebration of his forthcoming sixth full-length album and debut for John Varvatos Records/Republic Records Spirit (due out August 19, 2016). Amos Lee rose to stardom following the release of his self-titled debut album in 2005,

Philadelphia-native Amos Lee brings his “Spirit” to the Kimmel Center Sunday, September 11 during his National Tour!

immediately garnering the attention of press, music fans, and fellow artists. Spirit is the first album in which Lee acted as his own producer. The performance is presented in association with Live Nation. “In the studio, Amos Lee has an unparalleled ability to flawlessly blend together country to blues, folk to gospel, soul to rock,” said Anne Ewers, President & CEO of the Kimmel Center for the Performing Arts. “His live performance provides the audience with an unforgettable experience, and we are thrilled to welcome a beloved Philadelphia native to our Kimmel Center Campus.” Quickly earning the respect of legendary artists, Philadelphia-born Lee has toured with Bob Dylan and Paul Simon, collaborated with Norah Jones, Lucinda Williams, Alison Krauss, Calexico, and Zac Brown Band, and has been touted as a favorite songwriter and performer by the likes of The Band Perry and Lady Antebellum. His self-titled debut album was followed with the critically-acclaimed Supply and Demand (2006) and Lady Days at the Lodge (2008). 2011’s Mission Bell entered the Billboard 200, Amazon, and iTunes charts at No. 1 and contained the No. 1 Triple A radio hit “Windows Are Rolled Down.” His forthcoming sixth full-length album Spirit will be available August 19. Tickets are available now and start at $39.50. Tickets can be purchased by calling 215893-1999, online at www.kimmelcenter.org, or at the Kimmel Center Box Office. Group sales are available for groups of 10 or more and can be purchased by calling 215-790-5883.

“The Long Tides” is at turns both comic character study and poignant audit of how we spend our minutes—and what happens in the moments that stand out. Nicole Quenelle in “The Long Tides.” Photos/Hannah van Sciver

Do You Have a Soul? COGNITIVE SCIENTIST JULIEN MUSOLINO SAYS “NO.” HEAR WHY

Julien Musolino’s “The Soul Fallacy” presentation is free and open to the public and takes place Wednesday, August 24, at 7 p.m. at the Ludington Library, 5 South Bryn Mawr Avenue, Bryn Mawr, PA. o you believe that you have a soul? If so, do you think that it will it survive the death of your body? Come and hear cognitive scientist, author and psychology professor Julien Musolino discuss “The Soul Fallacy,” from his book “The Soul Fallacy: What Science Shows We Gain from Letting Go of Our Soul Beliefs,” at the Freethought Society’s meeting on Wed., August 24 at the Ludington Library, 5 South Bryn Mawr Avenue, Bryn Mawr, PA at 7 p.m. “I decided to write this book because I’ve been teaching psychology and cognitive science for a number of years now, and I thought that there was one big elephant in the room,” Musolino said. “Students were told all the time about what we call the material basis of mind, but very rarely if ever were they told what this entails for popular conceptions of how we function mentally, the concept of the soul.” 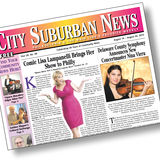