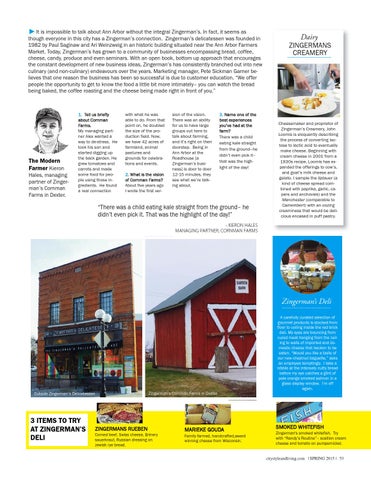 ► It is impossible to talk about Ann Arbor without the integral Zingerman’s. In fact, it seems as though everyone in this city has a Zingerman’s connection. Zingerman’s delicatessen was founded in 1982 by Paul Saginaw and Ari Weinzweig in an historic building situated near the Ann Arbor Farmers Market. Today, Zingerman’s has grown to a community of businesses encompassing bread, coffee, cheese, candy, produce and even seminars. With an open book, bottom up approach that encourages the constant development of new business ideas, Zingerman’s has consistently branched out into new culinary (and non-culinary) endeavours over the years. Marketing manager, Pete Sickman Garner believes that one reason the business has been so successful is due to customer education. “We offer people the opportunity to get to know the food a little bit more intimately– you can watch the bread being baked, the coffee roasting and the cheese being made right in front of you.”

1. Tell us briefly about Cornman Farms. My managing partner Alex wanted a way to de-stress. He took his son and started digging up the back garden. He grew tomatoes and carrots and made some food for people using those ingredients. He found a real connection

with what he was able to do. From that point on, he doubled the size of the production field. Now, we have 42 acres of farmland, animal pastures and grounds for celebrations and events.

2. What is the vision of Cornman Farms? About five years ago I wrote the first ver-

sion of the vision. There was an ability for us to have large groups out here to talk about farming, and it’s right on their doorstep. Being in Ann Arbor at the Roadhouse [a Zingerman’s business] is door to door 12-15 minutes, they see what we’re talking about.

3. Name one of the best experiences you’ve had at the farm? There was a child eating kale straight from the ground–he didn’t even pick it– that was the highlight of the day!

“There was a child eating kale straight from the ground– he didn’t even pick it. That was the highlight of the day!”

Cheesemaker and proprietor of Zingerman’s Creamery, John Loomis is eloquently describing the process of converting lactose to lactic acid to eventually make cheese. Beginning with cream cheese in 2001 from a 1930s recipe, Loomis has expanded the offerings to cow’s, and goat’s milk cheese and gelato. I sample the liptauer (a kind of cheese spread combined with paprika, garlic, capers and anchovies) and the Manchester (comparable to Camembert) with an oozing creaminess that would be delicious encased in puff pastry.

3 ITEMS TO TRY AT ZINGERMAN’S DELI

A carefully curated selection of gourmet products is stocked from floor to ceiling inside the red brick deli. My eyes are bouncing from cured meat hanging from the ceiling to walls of imported and domestic cheese that beckon to be eaten. “Would you like a taste of our new chestnut baguette,” asks an employee temptingly. I take a nibble at the intensely nutty bread before my eye catches a glint of pale orange smoked salmon in a glass display window. I’m off again. 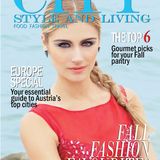