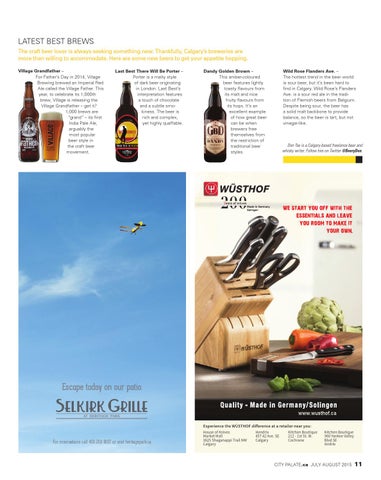 LATEST BEST BREWS The craft beer lover is always seeking something new. Thankfully, Calgary’s breweries are more than willing to accommodate. Here are some new beers to get your appetite hopping. Village Grandfather – For Father’s Day in 2014, Village Brewing brewed an Imperial Red Ale called the Village Father. This year, to celebrate its 1,000th brew, Village is releasing the Village Grandfather – get it? 1,000 brews are “grand” – its first India Pale Ale, arguably the most popular beer style in the craft beer movement.

Last Best There Will Be Porter – Porter is a malty style of dark beer originating in London. Last Best’s interpretation features a touch of chocolate and a subtle smokiness. The beer is rich and complex, yet highly quaffable.

Wild Rose Flanders Ave. – The hottest trend in the beer world is sour beer, but it’s been hard to find in Calgary. Wild Rose’s Flanders Ave. is a sour red ale in the tradition of Flemish beers from Belgium. Despite being sour, the beer has a solid malt backbone to provide balance, so the beer is tart, but not vinegar-like.

Dandy Golden Brown – This amber-coloured beer features lightly toasty flavours from its malt and nice fruity flavours from its hops. It’s an excellent example of how great beer can be when brewers free themselves from the restriction of traditional beer styles.

Escape today on our patio. www.wusthof.ca

The Flavour of Calgary's Food Scene - Summer in the City Palate