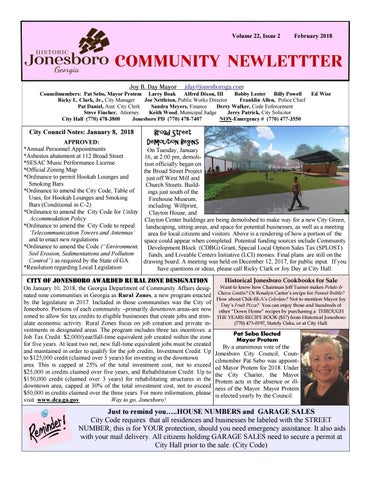 Broad Street Demolition Begins On Tuesday, January 16, at 2:00 pm, demolition officially began on the Broad Street Project just off West Mill and Church Streets. Buildings just south of the Firehouse Museum, including Willprint, Clayton House, and Clayton Center buildings are being demolished to make way for a new City Green, landscaping, sitting areas, and space for potential businesses, as well as a meeting area for local citizens and visitors. Above is a rendering of how a portion of the space could appear when completed. Potential funding sources include Community Development Block (CDBG) Grant, Special Local Option Sales Tax (SPLOST) funds, and Liveable Centers Initiative (LCI) monies. Final plans are still on the drawing board. A meeting was held on December 12, 2017, for public input. If you have questions or ideas, please call Ricky Clark or Joy Day at City Hall.

Historical Jonesboro Cookbooks for Sale Want to know how Chairman Jeff Turner makes Potato & Cheese Gratin? Or Rosalyn Carter’s recipe for Peanut Brittle? How about Chik-fil-A’s Coleslaw? Not to mention Mayor Joy Day’s Fruit Pizza? You can enjoy those and hundreds of other “Down Home” recipes by purchasing a THROUGH THE YEARS RECIPE BOOK ($17) from Historical Jonesboro (770) 473-0197, Stately Oaks, or at City Hall.

Just to remind you…..HOUSE NUMBERS and GARAGE SALES City Code requires that all residences and businesses be labeled with the STREET NUMBER; this is for YOUR protection, should you need emergency assistance. It also aids with your mail delivery. All citizens holding GARAGE SALES need to secure a permit at City Hall prior to the sale. (City Code)

FEBRUARY IS BLACK HISTORY MONTH Try our Trivia Below...

Clayton County Humane Society Animal Shelter www.claytoncountyhumane.org 7810 N. McDonough (770) 471-9436 Charlemagne is adorable, but getting lonesome. His littermates have all found homes, leaving him behind. He is a cute playful kitten.

Farmers Insurance 206 South Main Street Dolly is a wonderful dog, great with people and other animals. She loves life & brings out the best in everyone she meets. Come meet her.

GET TO KNOW….Your State Legislators Senator Gail Davenport-Dist. 44 Having served 10 years as a Senator, Gail Davenport’s interests are centered on Education, Veterans’ Affairs, children & senior citizens. The Senator grew up in Jonesboro, attended Clayton County Schools, graduated from Spelman College, and has been a Civil Rights and justice advocate for 30 years. She attends Andrews Chapel UMC in Jonesboro. Her goals for Clayton County include maintaining a good quality of life, an excellent education system, working to provide healthcare for everyone, economic development, job growth, providing a livable wage for all citizens, and transportation as a regional issue.

Rep. Mike Glanton ( District 75) Mike Glanton has served as a State Representative for 12 years. His special interests in the Legislature are: Education, economic development, and protectJonesboro ing the interests of Clayton County statewide. Rep. Glanton said: “I am 100% committed to the betterRosenwald ment of Clayton County.” He is a minister and a School family man. His vision for Clayton County is for 155 Smith Street Jonesboro to have a vibrant, live, social downtown. The Rosenwald rural He envisions a unified, diverse and inclusive county school building program in which all come together collaboratively. which began in 1924 was a major effort to improve the quality of public Rep. Demetrius Douglas (District 78) education for African Rep. Douglas has served 10 years in the legislature. Americans in the early His special interests are improving the lives of 20th century South. The schools are named after Julius Rosenwald, a Georgians. He sponsored HB 273 in 2017 requiring northern philanthropist, who, with Booker T. Washington began the elementary students to have daily unstructured redrive to improve education for African-American children in the cess in grades K-5 for at least 30 minutes. Douglas south. Many of the schools are gone today, but Jonesboro’s Rosendesires to see education in GA fully funded. He says wald School still stands. It is currently owned by Clayton County that it is important for all Georgians to have access Schools. A drive is underway by community partners to restore the to affordable healthcare. He supports legislation to school and preserve the history of those who attended the school . expand Medicaid in Georgia; he is concerned about For more information, see https://saving places.org./ citizens' healthcare and our struggling hospitals.

Did you hear about the nearsighted porcupine? He fell in love with a pincushion!

What did the valentine card say to the stamp? “Stick with me and we’ll go places!”

“To be Happy and Successful in Life, you need three bones: A Wishbone, A Backbone and a Funny Bone.”

All Other Emergencies: Dial 911

The Community News Published at Jonesboro City Hall Written & Edited by Mayor Joy B. Day To submit news items, call 770) 478-3800. Items must be submitted by the (20th to appear in next month’s edition or email jday@jonesboroga.com .