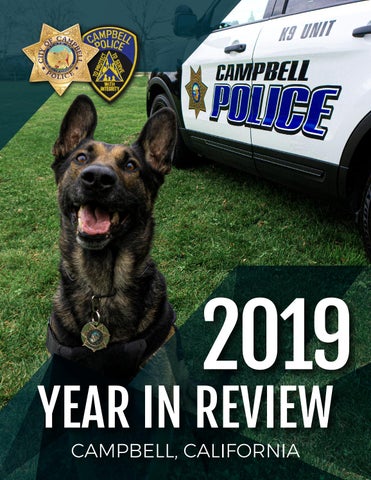 I am honored to begin 2020 serving as Campbellâ&#x20AC;&#x2122;s 9th Police Chief alongside the highly motivated and hardworking members of the Campbell Police Department. Since I began my career in Campbell as a Police Explorer at 16 years old, I have been surrounded by amazing individuals who have helped shape our department. We have a dedicated group of sworn officers and civilian employees who work together to ensure the City of Campbell is a safe and enjoyable place for our community. I am proud of the success and outstanding reputation our department has achieved throughout the years. We set high standards for ourselves and pledge excellence and integrity in all we do. We believe in, and support, diversity, equity, and impartiality by following our Core Principles of Policing: Service, Justice, and Fundamental Fairness. Because of this, we have always put an emphasis on building strong partnerships with our community and fostering an environment of collaboration and respect. In recent years, our department has placed a focus on innovation and creativity. The progressive ways we interact with our community and how we address issues that impact Campbell demonstrates this new approach. Recognizing the importance of communicating practical and timely information, we are constantly looking for ways to engage those we serve. I am proud of our outside-the-box approaches to policing and intend to continue using technology to better serve our community. Campbell is rich with history and the members of the Campbell Police Department, past and present, are proud to be a part of it. Safeguarding our community is a meaningful and purposeful mission for all of us at the police department. We recognize the significance of the trust placed in us and are committed to providing exceptional service. I hope you enjoy this 2019 Year in Review. It is intended to give you a glimpse into some of our accomplishments and successes throughout the year.

CRIME IN CAMPBELL Uniform Crime Reporting (UCR) is a nationwide law enforcement submission of statistics by agencies throughout the country to the Federal Bureau of Investigations. The FBI’s UCR Program divides offenses into two groups – Part I and Part II Crimes.

1,712 Part I Crimes: Offenses that are more serious crimes by nature and/or volume.

Part II Crimes: Crimes other than those defined in Part I and include crimes such as fraud, forgery, vandalism, alcohol-related crimes, drug offenses, weapons violations, etc.

1 ST K9 OFFICER We’ve made an exciting addition to our team. In July of 2019, Campbell Police welcomed our first K9 Officer, Lucas. K9 Lucas is a 5-year-old Belgian Malinois who came to us as a lateral from Oakland PD. K9 Lucas will be serving the community alongside his partner, Officer Magee. Their specialties include locating individuals, apprehending criminal offenders, and putting smiles on faces. Officer Magee and K9 Lucas went through a 6-week training before taking their partnership to the streets of Campbell. During this training, they perfected their skills in tracking, obedience, various types of searches, and much more. We want to give special thanks to the Campbell Police Foundation for their generous donation which made acquiring Lucas possible.

On the morning of February 8, 2019, Campbell Police responded to a report of a male brandishing a firearm at the Denny’s on Bascom Ave. Officers responded and were able to safely evacuate all customers within the restaurant. Officers learned the suspect had been acting aggressively, irrationally, and was foaming at the mouth prior to pointing a handgun at a man who was working at the business.

The Campbell Police SWAT and Crisis Negotiation Team were activated and made numerous attempts to communicate with the suspect. Santa Clara Police Department, Sunnyvale Department of Public Safety, Santa Clara County Sheriffs, Los Gatos/Monte Sereno Police, and the Santa Clara County Fire Department assisted our agency by sending officers, armored rescue vehicles, K9 units and additional support. The suspect refused to communicate with negotiators, and at one point, was seen on the roof. After more than eleven hours of barricading himself in the business, chemical agents were introduced which caused the suspect to exit the restaurant. The suspect was ultimately taken into custody with the assistance of a K9. He was found to be under the influence of a controlled substance and in possession of over $3,000 dollars he had stolen from Denny’s. The pistol the suspect was armed with was located inside the restaurant and he was later tied to several robberies in the City of San Jose. The successful resolution of this incident is a great example of the amazing working relationships we have with other agencies in the County and how we often rely on each other to better protect and serve our individual communities.

After 25 years of law enforcement service, Chief Dave Carmichael retired on December 30, 2019. Chief Carmichael had an amazing career at Campbell Police Department and had many accomplishments, which will continue to have a lasting impact on the department and  Arson Case Solved our community. The Campbell Police Department will truly miss this visionary leader but because of In late 2018, Campbell Police Arson the work of Chief Carmichael and all our former police Investigators, along with Santa Clara chiefs, the department is set up for future success. County Fire personnel, responded to a suspicious fire that destroyed a home Congratulations Chief Carmichael on a successful and under construction off Leigh Ave. This fire distinguished career. Enjoy your well-earned retirement! caused almost one million dollars in damage. An extensive investigation was conducted that lasted well into 2019. It involved the Campbell Police Department, Santa Clara County Fire Department, and members of a Federal arson task force. The fire was eventually determined to be an arson and investigators identified a possible suspect, the next-door neighbor. After conducting multiple interviews, analyzing countless pieces of forensic evidence, and using a police arson K9, investigators developed enough evidence to serve a search warrant at the neighbor’s residence. Evidence was collected during the search warrant service which implicated Deni Urosevic, 60 year old resident of Campbell, in the arson. Urosevic was arrested and booked into the Santa Clara County Jail on arson related charges. This case is just one example of many where our Arson Program with the Santa Clara County Fire Department is paying dividends for our community. Agent Ana Spear has served Campbell for the past 28 years and retired in 2019. Not only Three Arrests Made in did she serve the community on-duty, Gang Related Stabbing but off-duty as well. During the In the early morning hours of August holidays, Agent Spear would spend 28th, 2019, officers responded to a many of her days off working report of a stabbing at the Shell Gas the Campbell Toy Program Station on E. Hamilton Avenue. When they and many other community arrived, they found a male victim who had events. Though she has been stabbed multiple times by three males while he was getting gas. During the investigation, it was determined recently retired, she that the motivation for this attack was gang related. All three suspects were subsequently identified, multiple plans to stay involved search warrants were served, and arrest warrants were obtained. Jose Gonzalez, 26 years old of Campbell, Alexis with both the Hernandez, 22 years old of San Jose, and Jose Savala, 36 years old of San Jose were, all arrested and charged with department and attempted murder and participation in a criminal street gang. community  programs.

Craigslist Scammer Since June 2019, the Campbell Police Department has investigated six incidents of rental scams by the same suspect. The suspect posted rooms or apartments to rent on Craigslist. The suspect would meet possible renters, sign rental agreements, and take their deposits. He would later contact them, saying that the rental was no longer available and write a refund check using an account with insufficient funds, which resulted in significant financial loss to the victims. During the investigation, the suspect was identified as Robert Milo, 23 years of Campbell. Milo defrauded the six known Campbell victims out of more than $18,000. In November 2019, Campbell Detectives arrested Milo and he was taken into custody and charged with three counts of fraud, one count of attempted fraud, three counts of writing fraudulent checks, one count of committing a felony while on supervised release, and one count of resisting arrest.

Campbell had a strong showing this year finishing third overall and top in Santa Clara County. The team also took second place in the “Team Assault” event where the team completed a live-fire scenario, including an assault of a structure using tactics and decision making to simulate a hostage rescue. Officer Finestone and Officer Magee took second place in the “TwoMan Combat” event which included obstacles, such as walls, ladders, monkey bars and windows while shooting reactive and static targets with both handguns and rifles. This competition serves as valuable training for our officers, as well as a great way to network with other agencies to share tactics and experiences to better serve our community.

In May 2019, our SWAT team participated in the annual “Best in the West” SWAT competition hosted by the Santa Clara County Sheriff’s Department. 31 SWAT teams from agencies all along the West Coast participated in seven events during this two-day competition.

On July 28, 2019, the City of Gilroy experienced a horrific tragedy at the Garlic Festival. A lone gunman illegally entered the event with a high caliber rifle and immediately started shooting festival attendees. Three people were killed, including two children, and over twenty others sustained gunshot wounds.

Two members of the Campbell Police Department, who were working on mutual aid teams providing security at the festival, were part of the initial officers responding to the shooting. These two officers, along with officers from other police agencies, assisted in saving the lives of several people and rendering first aid to many others. Several additional Campbell officers responded to Gilroy moments after the shooting to assist the Gilroy Police Department with their response to this tragedy.

BEST IN THE WEST

Throughout the following weeks, Campbell officers and dispatchers worked many shifts in Gilroy assisting with crime scene security and emergency radio communications. While what happened in Gilroy was devastating for the city, the men and women of the Campbell Police Department were proud to offer their assistance to the Gilroy Police Department and the Gilroy community.

Reserve Officer Soulodre and Officer Munoz took time out of their regular work schedule to participate as counselors in a four-day program called Camp Everytown. This program is for high school students to engage in a dialogue about issues and develop an authentic empathy that crosses lines of race, religion, gender, and so much more. At the beginning of the camp, the students didnâ&#x20AC;&#x2122;t know their two counselors were officers. Towards the end of the program, the officers put on their uniform and surprised the students. The officers opened up about their experiences in law enforcement and shared with the students about how officers can build better relationships with the communities. This program was not only impactful for the students, but our officers as well. Retired Officer Cameron

now serves as a Reserve Officer working in our Traffic Division. Officer Cameron is also a lieutenant and instructor for the US Navy Sea Cadet program. During the summer he coordinates a Master at Arms training here in the Bay Area for cadets from all over the country. Several of our officers joined the cadets to help them with their training this year.

has led the department in raising funds for the Special Olympics Northern California. He dedicates his time each year to coordinate fundraising events like the Law Enforcement Torch Run and Tip A Cop. Every dollar our department raises goes towards helping an athlete train and compete in the Special Olympics. 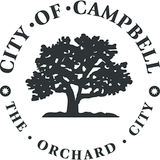