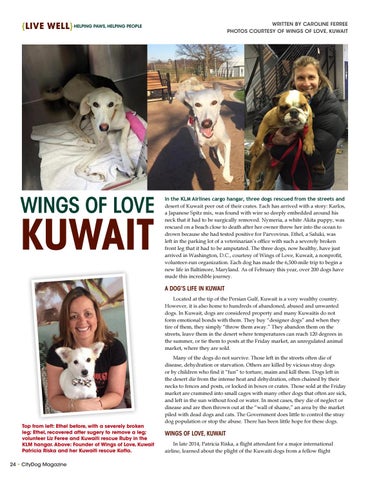 In the KLM Airlines cargo hangar, three dogs rescued from the streets and desert of Kuwait peer out of their crates. Each has arrived with a story: Karlos, a Japanese Spitz mix, was found with wire so deeply embedded around his neck that it had to be surgically removed. Nymeria, a white Akita puppy, was rescued on a beach close to death after her owner threw her into the ocean to drown because she had tested positive for Parvovirus. Ethel, a Saluki, was left in the parking lot of a veterinarian’s office with such a severely broken front leg that it had to be amputated. The three dogs, now healthy, have just arrived in Washington, D.C., courtesy of Wings of Love, Kuwait, a nonprofit, volunteer-run organization. Each dog has made the 6,500-mile trip to begin a new life in Baltimore, Maryland. As of February this year, over 200 dogs have made this incredible journey.

A DOG’S LIFE IN KUWAIT Located at the tip of the Persian Gulf, Kuwait is a very wealthy country. However, it is also home to hundreds of abandoned, abused and unwanted dogs. In Kuwait, dogs are considered property and many Kuwaitis do not form emotional bonds with them. They buy “designer dogs” and when they tire of them, they simply “throw them away.” They abandon them on the streets, leave them in the desert where temperatures can reach 120 degrees in the summer, or tie them to posts at the Friday market, an unregulated animal market, where they are sold.

Top from left: Ethel before, with a severely broken leg; Ethel, recovered after sugery to remove a leg; volunteer Liz Feree and Kuwaiti rescue Ruby in the KLM hangar. Above: Founder of Wings of Love, Kuwait Patricia Riska and her Kuwaiti rescue Kofta. 24 • CityDog Magazine

Many of the dogs do not survive. Those left in the streets often die of disease, dehydration or starvation. Others are killed by vicious stray dogs or by children who find it “fun” to torture, maim and kill them. Dogs left in the desert die from the intense heat and dehydration, often chained by their necks to fences and posts, or locked in boxes or crates. Those sold at the Friday market are crammed into small cages with many other dogs that often are sick, and left in the sun without food or water. In most cases, they die of neglect or disease and are then thrown out at the “wall of shame,” an area by the market piled with dead dogs and cats. The Government does little to control the stray dog population or stop the abuse. There has been little hope for these dogs.

WINGS OF LOVE, KUWAIT In late 2014, Patricia Riska, a flight attendant for a major international airline, learned about the plight of the Kuwaiti dogs from a fellow flight

CityDog Magazine Baltimore fills a much needed niche, supplying dog lovers with everything they want and need to know about life and living with dogs in Maryland—from the city of Baltimore to the Chesapeake Bay to the beaches of Ocean City—and everywhere in between. 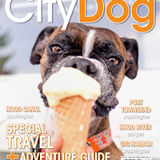