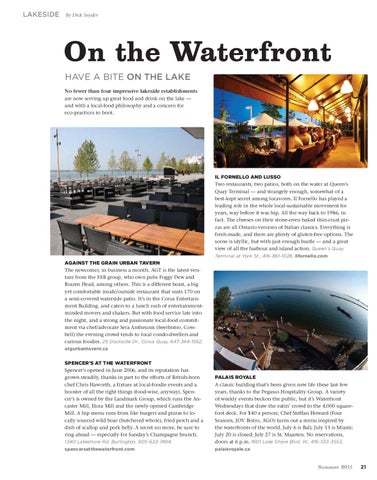 On the Waterfront Have a bite on the lake No fewer than four impressive lakeside establishments are now serving up great food and drink on the lake — and with a local-food philosophy and a concern for eco-practices to boot.

Il Fornello and Lusso Two restaurants, two patios, both on the water at Queen’s Quay Terminal — and strangely enough, somewhat of a best-kept secret among locavores. Il Fornello has played a leading role in the whole local-sustainable movement for years, way before it was hip. All the way back to 1986, in fact. The cheeses on their stone-oven baked thin-crust pizzas are all Ontario versions of Italian classics. Everything is fresh-made, and there are plenty of gluten-free options. The scene is idyllic, but with just enough bustle — and a great view of all the harbour and island action. Queen’s Quay Terminal at York St., 416-861-1028, ilfornello.com

Against the Grain Urban Tavern The newcomer, in business a month. AGT is the latest venture from the FAB group, who own pubs Foggy Dew and Brazen Head, among others. This is a different beast, a big yet comfortable inside/outside restaurant that seats 170 on a semi-covered waterside patio. It’s in the Corus Entertainment Building, and caters to a lunch rush of entertainmentminded movers and shakers. But with food service late into the night, and a strong and passionate local-food commitment via chef/advocate Sera Antheunis (beerbistro, Cowbell) the evening crowd tends to local condo-dwellers and curious foodies. 25 Dockside Dr., Corus Quay, 647-344-1562, atgurbantavern.ca

Spencer’s at the Waterfront Spencer’s opened in June 2006, and its reputation has grown steadily, thanks in part to the efforts of British-born chef Chris Haworth, a fixture at local-foodie events and a booster of all the right things (food-wise, anyway). Spencer’s is owned by the Landmark Group, which runs the Ancaster Mill, Elora Mill and the newly opened Cambridge Mill. A hip menu runs from like burgers and pizzas to locally sourced wild boar (butchered whole), fried perch and a dish of scallop and pork belly. A secret no more, be sure to ring ahead — especially for Sunday’s Champagne brunch. 1340 Lakeshore Rd, Burlington, 905-633-7494,

Palais Royale A classic building that’s been given new life these last few years, thanks to the Pegasus Hospitality Group. A variety of weekly events beckon the public, but it’s Waterfront Wednesdays that draw the eatin’ crowd to the 4,000 squarefoot deck. For $40 a person, Chef Steffan Howard (Four Seasons, JOV Bistro, AGO) turns out a menu inspired by the waterfronts of the world. July 6 is Bali; July 13 is Miami; July 20 is closed; July 27 is St. Maarten. No reservations, doors at 6 p.m. 1601 Lake Shore Blvd. W., 416-533-3553, 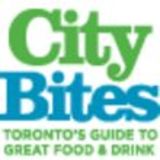