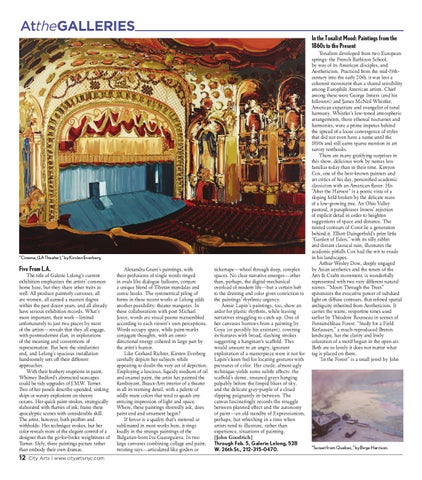 AttheGALLERIES In the Tonalist Mood: Paintings from the 1860s to the Present

The title of Galerie Lelong’s current exhibition emphasizes the artists’ common home base, but they share other traits as well. All produce painterly canvases, all are women, all earned a masters degree within the past dozen years, and all already have serious exhibition records. What’s more important, their work—limited unfortunately to just two pieces by most of the artists—reveals that they all engage, with postmodernist élan, in explorations of the meaning and conventions of representation. But here the similarities end, and Lelong’s spacious installation handsomely sets off their different approaches. With their feathery eruptions in paint, Whitney Bedford’s abstracted seascapes could be tidy upgrades of J.M.W. Turner. Two of her panels describe upended, sinking ships or watery explosions on sheeny oceans. Her quick paint strokes, strategically elaborated with flurries of ink, frame these apocalyptic scenes with considerable skill. The artist, however, both proffers and withholds: Her technique evokes, but her color reveals more of the elegant control of a designer than the go-for-broke weightiness of Turner. Slyly, these paintings picture rather than embody their own dramas.

Alexandra Grant’s paintings, with their profusions of single words ringed in ovals like dialogue balloons, conjure a unique blend of Tibetan mandalas and comic books. The symmetrical piling of forms in these recent works at Lelong adds another possibility: theater marquees. In these collaborations with poet Michael Joyce, words are visual poems reassembled according to each viewer’s own perceptions. Words occupy space, while paint-marks conjugate thoughts, with an omnidirectional energy cohered in large part by the artist’s humor. Like Gerhard Richter, Kirsten Everberg carefully depicts her subjects while appearing to doubt the very act of depiction. Employing a luscious, liquidy medium of oil and enamel paint, the artist has painted the flamboyant, Beaux-Arts interior of a theater in all its teeming detail, with a palette of oddly mute colors that tend to quash any enticing impression of light and space. Where, these paintings shrewdly ask, does paint end and ornament begin? If fervor is a quality that’s metered or sublimated in most works here, it rings loudly in the strange paintings of the Bulgarian-born Iva Gueorguieva. In two large canvases combining collage and paint, twisting rays—articulated like girders or

tickertape—wheel through deep, complex spaces. No clear narrative emerges—other than, perhaps, the digital-mechanical overload of modern life—but a certain heft to the drawing and color gives conviction to the paintings’ rhythmic urgency. Annie Lapin’s paintings, too, show an ardor for plastic rhythms, while leaving narratives struggling to catch up. One of her canvases borrows from a painting by Goya (or possibly his assistant), covering its features with broad, slashing strokes suggesting a hangman’s scaffold. This would amount to an angry, ignorant exploitation of a masterpiece were it not for Lapin’s keen feel for locating gestures with pressures of color. Her crude, almost ugly technique yields some subtle effects: the scaffold’s dense, smeared grays hanging palpably before the limpid blues of sky, and the delicate gray-purple of a cloud slipping poignantly in-between. The canvas fascinatingly records the struggle between planned effect and the autonomy of paint—an old standby of Expressionism, perhaps, but refreshing in a time when artists tend to illustrate, rather than experience, situations of painting. [John Goodrich] Through Feb. 5, Galerie Lelong, 528 W. 26th St., 212-315-0470.

Tonalism developed from two European springs: the French Barbizon School, by way of its American disciples, and Aestheticism. Practiced from the mid-19thcentury into the early 20th, it was less a coherent movement than a shared sensibility among Europhile American artists. Chief among these were George Inness (and his followers) and James McNeil Whistler, American expatriate and evangelist of tonal harmony. Whistler’s low-toned atmospheric arrangements, those ethereal nocturnes and harmonies, were a prime impetus behind the spread of a loose convergence of styles that did not even have a name until the 1890s and still earns sparse mention in art survey textbooks. There are many gratifying surprises in this show, delicious work by names less familiar today than in their time. Kenyon Cox, one of the best-known painters and art critics of his day, personified academic classicism with an American flavor. His “After the Harvest” is a poetic vista of a sloping field broken by the delicate mass of a low-growing tree. An Ohio Valley pastoral, it paraphrases Inness’ rejection of explicit detail in order to heighten suggestions of space and distance. The misted contours of Corot lie a generation behind it. Elliott Daingerfield’s prim little “Garden of Eden,” with its silly rabbit and distant classical ruin, illustrates the academic pitfalls Cox had the wit to evade in his landscapes. Arthur Wesley Dow, deeply engaged by Asian aesthetics and the tenets of the Arts &amp; Crafts movement, is wonderfully represented with two very different natural scenes. “Moon Through the Trees” epitomizes the evocative power of subdued light on diffuse contours, that refined spatial ambiguity inherited from Aestheticism. It carries the warm, vespertine tones used earlier by Théodore Rousseau in scenes of Fontainebleau Forest. “Study for a Field Kerlaouen,” a much-reproduced Breton landscape, has the clarity and lively coloration of a motif begun in the open air. Both are so lovely it does not matter what tag is placed on them. “In the Forest” is a small jewel by John

“Sunset from Quebec,” by Birge Harrison.

The January 26, 2011 issue of cityArts. CityArts, published twice a month (20 times a year) is an essential voice on the best to see, hear and experience in New York’s cultural landscape. 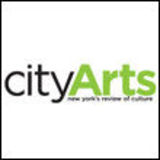