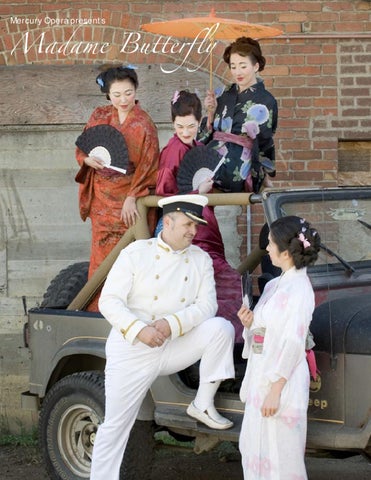 Butterfly “People like going to the movies—they want to be entertained. For

An‘Opera in your Face’ production by Darcia Parada Text by: Devon Bryce

me, opera is just like going to the movies: it’s the earliest form of cinema, for it combines all the elements we see in movies today, only live. The major difference in a traditional operatic production is the absence of the close up which is one of the reasons Mercury Opera strives to keep it more intimate, incisive, and exciting. It’s “opera in your face”. Darcia Parada’s excitement over Mercury Opera’s upcoming production of Madame Butterfly is palpable. The show will run Aug. 23-27 in Edmonton’s Giovanni Caboto Park. “I want to be able to connect people with something that makes them excited, that transports them from their daily lives,” says Parada. “We do that by producing opera in a way that a modern audience understands.” Early in her life Parada was a singer interested in musical theatre, but when she was in high school she met a woman from the Edmonton Opera

who introduced her to the more challenging genre of opera. Parada put in countless hours of hard work and pursued opportunities in opera outside of Edmonton; this path eventually led her to leading roles across North America and Europe, from New York, London UK, Germany, and ‘stan’s” Kazakhstan, Kyrgyzstan and Uzbekistan in tour that ended at the Tashkent Bolshoi. In addition to her stage appearances, Parada has put her voice to film scores and has appeared on a compilation album from the Scottish pop singer Jimmy Somerville. But after the birth of her son, Parada had to re-examine her life and what she wanted from it. “I was touring around Europe, and bringing a two-year-old with you is not realistic, though some singers do it” she says. “It shifted my priorities.” Realizing that her work in the film industry had an effect on how she viewed things, she decided to use that cinematic influence on opera to “make the audience feel like they’re part of the action.” She found inspiration while attending a dinner party at a friend’s place in New York. Noticing the wonderful acoustics of the loft, Parada convinced the tenor she was singing with at the time to perform a duet from La Bohème there. Much of the audience was composed of opera fans who were blown away by the intimacy of the event. From that staged concert, Mercury Opera was born. Following the loft duet,came a sold out debut production of Cavalleria Rusticana staged inside a SoHo Loft, (Studio ZE )with an orchestra of 28, and an audience of 120 for three nights. Ground breaking in classical music at that time,Parada used multimedia tools to highlight the characters inner workings, giving the production a cinematic flair. Given the minute size of the company at that point, it was difficult to combine gargantuan (orchestras) production size and financial success; as Parada explains, “I realized I can’t stage gigantic productions and have it pay off, but in choosing material carefully, I can still maintain artistic integrity while tailoring the productions to slightly

larger off-Broadway show size. While we strive to make opera more appealing to wider public engaging them in a way that they feel “a part of the a part of the show” we won’t dumb it down. Due to budgetary constraints, the use of surtitles has never been an option, and even in the case of a “lesser known” operas, people still seem to “get” the story. In 1999 site specific interactive opera was unheard of in NYC and Parada was encountering success; the National Arts Club even asked her to stage a truncated version of Carmen in their building. But immediately following the Sept. 11, 2001’s World Trade Center attacks, support for grassroots arts companies was hard to come by in New York and Parada put the project on hold until things became more stable. As she was getting ready to re-ignite the company, she returned to Edmonton for a summer wedding and fell in love, prompting her return to Canada, fledgling opera company in tow. Moving back to Edmonton was great, Parada says, as she felt reconnected to her roots. “It was hard the first year, getting used to the pace and wondering where all the crowds are. Now I’ve realized that if you’re doing your work and creating, you can be anywhere. Here there is much interest in doing things with a twist. Edmonton, for the past 30 years has also been ahead of the curve in terms of risk taking, innovation and cultural support. For example in 1980,we had an art installation waterfall. In 2009 New York got one and it was a big deal. “I was like, are you kidding? The Edmonton first- in list is long. While I adore NYC, in Edmonton it is also rare to be encounter a twenty person line up to get a coffee at Starbucks- definitely a perk”. Parada found the jump between performing opera and running her own company to be an easy transition. “Every show I worked on, I wanted to have my mark on it. I was always thinking about how to make the show more interesting. Going to sleep at night wondering what would it

be like, had I been directed to do this, or by embellishing something in the wardrobe, much like a kid who has to wear a uniform to school.”

cess to all four parties, and will be able to mingle between them before heading over to Giovanni Caboto Park where the curtain will rise.

Her dream is to draw more people into her passion, and staging her own shows allows her the freedom to be creative in her approach. Interest in opera is growing—for example, New York’s Metropolitan Opera movie theatre HD live broadcasts are a way to reach new fans. But the Met shows don’t necessarily break down any preconceptions people might have about opera, and this is what Parada hopes to accomplish with her shows. “People don’t want to be bored. We need to show people that opera isn’t intimidating,and that these stories are just as relevant today,” she says. “And it doesn’t have to dull, it can be fun, it can be moving,as well as transporting.”

For their performance of Pagliacci, a trumpet player signaled the end of the party and the rise of the curtain, while a stilt walker led the audience to the performance site. Parada is loathe to give away too many details of this year’s show in advance of the production, except for one: “There is always that one guy in the audience humming along with all the (arias) songs in a Puccini opera. So we’re posting a tutorial on our website and on YouTube ‘The Humming Chorus’ as a sing along component, so that anyone who has the urge to hum, can do so without chastisement,but they’d better practice”she winks.

Parada chooses unique locations to stage her productions in order to provide a more laid back environment than the inside of an opera house. “I want these shows to be an event that gets people excited and that feels accessible” she says. “[Opera] should be a sensual experience.” Madame Butterfly ‘s fresh air production will be staged inside a tent in Giovanni Caboto Park, the heart of Edmonton’s Little Italy. A stark contrast to the darkened opera houses of New York and Europe, they will be taking it to street -level by incorporating four locations who will also host pre-event parties to enrich the opera experience: Zocalo Gallery, Delish Bakery, Spinelli’s Bar Italia and the storefront of Ital-Canadian Meats. Ticket holders will have ac-

Parada calls Mercury Opera “in-your-face opera”; she enjoys combining different aspects to create a full experience for her audience. The response is strong, with each production selling out. The audience Parada sees at each show is varied. “We had country and western fans who were just looking for the boat ride when we did Puccini’s Il Tabarro on the Edmonton Queen [in 2009], and they walked away as fans,” she recalls. “If audiences aren’t being drawn into traditional opera, we need to make things more engaging for them. And it has to be fun for the performers as well.” //