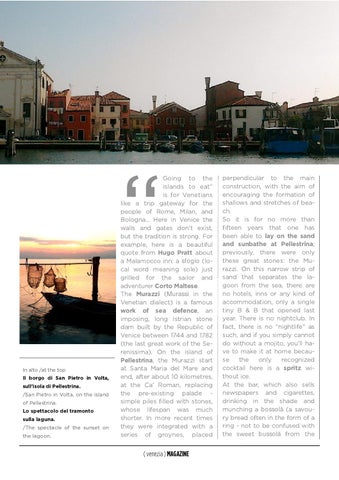 Going to the islands to eat” is for Venetians like a trip gateway for the people of Rome, Milan, and Bologna... Here in Venice the walls and gates don't exist, but the tradition is strong. For example, here is a beautiful quote from Hugo Pratt about a Malamocco inn: a sfogio (local word meaning sole) just grilled for the sailor and adventurer Corto Maltese. The Murazzi (Murassi in the Venetian dialect) is a famous work of sea defence, an imposing, long Istrian stone dam built by the Republic of Venice between 1744 and 1782 (the last great work of the Serenissima). On the island of Pellestrina, the Murazzi start at Santa Maria del Mare and end, after about 10 kilometres, at the Ca' Roman, replacing the pre-existing palade simple piles filled with stones, whose lifespan was much shorter. In more recent times they were integrated with a series of groynes, placed ( venezia ) MAGAZINE

perpendicular to the main construction, with the aim of encouraging the formation of shallows and stretches of beach. So it is for no more than fifteen years that one has been able to lay on the sand and sunbathe at Pellestrina; previously, there were only these great stones: the Murazzi. On this narrow strip of sand that separates the lagoon from the sea, there are no hotels, inns or any kind of accommodation, only a single tiny B & B that opened last year. There is no nightclub. In fact, there is no "nightlife" as such, and if you simply cannot do without a mojito, you'll have to make it at home because the only recognized cocktail here is a spritz without ice. At the bar, which also sells newspapers and cigarettes, drinking in the shade and munching a bossolà (a savoury bread often in the form of a ring - not to be confused with the sweet bussolà from the 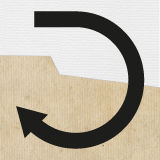