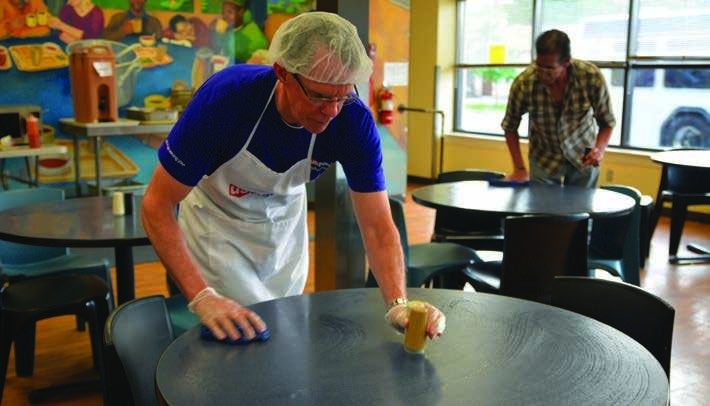 The intersection of Penn and Plymouth Avenues on the Near North Side of Minneapolis has for years been charged with negative symbolism. Once a bustling hub for the city’s African American community, it has stood vacant for more than a quarter-century. A picture of emptiness, it has represented, for those old enough to remember, a generation’s worth of lost promise and unfulfilled aspiration.

That narrative was permanently changed in the summer of 2018 with the christening of the Regional Acceleration Center (RAC), a $36 million, 92,000 square foot building that anchors a $100 million private-public partnership envisioned as a catalyst for economic revitalization in North Minneapolis. Contained within the sleek new structure is the headquarters of Thor Companies, a construction firm that moved from Fridley and spearheaded the project.

Thor’s presence is meant to anchor a long-term strategy for community investment.

“You start by first building relationships,” explains Thor chief executive officer Ravi Norman. He’s sitting behind his desk on the building’s fourth floor, steps away from a glassed-in gallery designed to showcase a rotating slate of local artists. “Those relationships are based on shared vision and hope. After that comes real effort, and then that hope can begin to yield trust.”

Thor Construction came into being in 1980, when founder Richard Copeland (today Thor Companies’ chairman) leveraged a pickup truck and a few tools into a company that now employs about 250 people and takes in more than $275 million in annual revenue. The largest minority-owned business in Minnesota, the company has played major roles in the construction and project management of metro icons such as U.S. Bank Stadium, the Minneapolis Central Library, and Hiawatha Light Rail—along with major buildings and attractions in California, Arizona, and Las Vegas.

The company’s move to North Minneapolis represents a different kind of investment and a higher set of stakes. “This is the single largest business investment on the Near North Side of Minneapolis in many years,” says Neil St. Anthony, a reporter who has covered Thor’s evolution for the Star Tribune. “Symbolically, this is a really important vote of confidence in the North Side.”

In addition to Thor’s corporate headquarters, the four-story building on Penn and Plymouth opened fully leased by tenants including Target Corp., the Metropolitan Economic Development Association, and Hennepin County. The ground level is home to the African American-owned fitness center ME & I, the restaurant Sammy’s Deli, and the nonprofit Build Wealth MN.

Norman defines his company’s North Side investment as “putting our money where our mouth is” in building community. He is quick to add that he envisions the building as merely a beginning.

Norman is an energetic speaker, charged by ideas that he enumerates in terms of methods and measurements, which made him an invaluable member of the 2015–16 Citizens League Met Council Task Force. With an MBA from the Carlson School of Management, he joined Thor as chief financial officer in 2005 and became CEO in 2009. He cites the Itasca Project’s MSP Regional Indicators Dashboard—which is based on quantifiable measurements of quality-of-life factors—as a model he wants to see applied to the North Minneapolis community. This data-based approach would define current conditions as well as provide a framework for future investments. After that, the model could also determine whether goals were being met.

The company’s direction is influenced by Copeland’s growing up on the North Side.

“One piece as we’re doing this work is defining better what is a healthy community,” Norman says. “We need to be good and smart at building, transforming, and sustaining. A big part of that is when people intentionally behave as though they belong together. That starts at the household level, then the block level, then the neighborhood, city, state, and regional [level]. Then maybe it can keep cascading up to a global level.”

The RAC development has elicited a measure of anxiety from some residents in the community who are concerned about gentrification. In the case of booming areas like the North Loop and Uptown, for example, skyrocketing real estate prices have squeezed out medium- and low-income residents. “I’m really excited by Thor’s presence coming into the community,” says Minneapolis City Council member Jeremiah Ellison, whose Ward 5 seat includes much of the North Side. “But you also have to know, there’s a particular sort of attitude that North Siders have with the history of development—not feeling like it’s for us and by us. There’s excitement and some trepidation about what Thor’s potential impact will be.”

Norman details the company’s plans to become involved in community building from the ground up, with an emphasis on promoting local African American businesses by making them an integral part of the construction supply chain. Norman also stresses the importance of communicating with anchor legacy institutions, like churches and community groups, in order to share information and make informed decisions. “Some of the most concealed assets are the people themselves,” he says. “And good stewardship is about maximizing the assets that you have.”

Total investment in the area is set to reach $100 million in the months to come. In addition to RAC’s casual dining spot and fitness center, both welcome additions for local residents, other nearby development includes a new building for the Estes Funeral Chapel, the only African American-owned business of its kind in the city, and a planned $67 million expansion for NorthPoint Health and Wellness. Other neighbors include the University of Minnesota’s Urban Research and Outreach-Engagement Center and the Minneapolis Urban League; with this nexus of public and private enterprises, a vision for a revitalized future is easy to entertain.

“In terms of gentrification, let’s dashboard it,” says Norman. “Let’s do the work to get feedback to find out what people want to see in their community—and what a healthy economy looks like for the people invested. We want to be a part of creating a new development ideology that is community-centric.”

Ellison, who calls himself “truly optimistic” about Thor’s role in the community, shares Norman’s priorities for promoting talent and investment across a wide range of interests.

“There can be a tendency within communities of color for there to be a perceived competition that doesn’t have to exist,” Ellison observes. “It’s the idea that there can be only one [major player]. I think that Thor can prove that the assets of North Minneapolis are here in abundance, and that they’re here to be a partner to the community. Thor’s presence is going to boost the flexibility and opportunities for North Side entrepreneurs—not drown them out.”

We want to be a part of creating a new development ideology that is community-centric.”

Norman’s vision for the coming years veers between the micro and the macro. He talks about Maslow’s hierarchy of human needs (safety, belonging, self-actualization, among others) to illustrate one idea, then returns to his passion for measurable lifestyle indicators to identify needs and performance. He’s able to wed economic development with a holistic notion of well-being that could be described as spiritual capitalism.

“I can’t find a neighborhood that doesn’t want a thriving economy, with opportunities for household incomes to increase, to own a home and have entrepreneurial opportunities,” he says. “Who doesn’t want to be in a place where I can reach my goals, feed my mind, and become smarter? This is going to be where science meets art.”

QUINTON SKINNER is a Twin Cities–based writer whose work has appeared in numerous periodicals. He is the cofounder of Logosphere Storysmiths. www.logosphere.us
This story is from:
Citizens League Voice: Fall 2018
by citizensleague