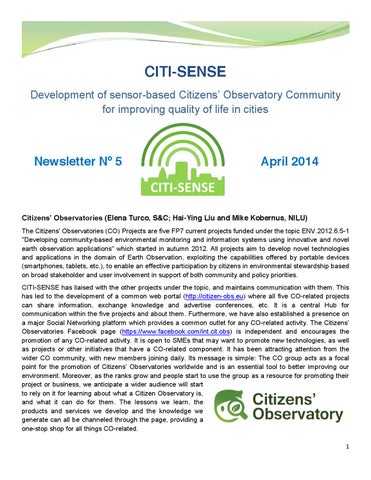 Citizens’ Observatories  (Elena Turco, S&C; Hai-Ying Liu and Mike Kobernus, NILU) The Citizens' Observatories (CO) Projects are five FP7 current projects funded under the topic ENV.2012.6.5-1 "Developing community-based environmental monitoring and information systems using innovative and novel earth observation applications" which started in autumn 2012. All projects aim to develop novel technologies and applications in the domain of Earth Observation, exploiting the capabilities offered by portable devices (smartphones, tablets, etc.), to enable an effective participation by citizens in environmental stewardship based on broad stakeholder and user involvement in support of both community and policy priorities. CITI-SENSE has liaised with the other projects under the topic, and maintains communication with them. This has led to the development of a common web portal (http://citizen-obs.eu) where all five CO-related projects can share information, exchange knowledge and advertise conferences, etc. It is a central Hub for communication within the five projects and about them. Furthermore, we have also established a presence on a major Social Networking platform which provides a common outlet for any CO-related activity. The Citizens’ Observatories Facebook page (https://www.facebook.com/int.cit.obs) is independent and encourages the promotion of any CO-related activity. It is open to SMEs that may want to promote new technologies, as well as projects or other initiatives that have a CO-related component. It has been attracting attention from the wider CO community, with new members joining daily. Its message is simple: The CO group acts as a focal point   for   the   promotion   of   Citizens’   Observatories   worldwide   and   is   an   essential   tool   to   better   improving   our   environment. Moreover, as the ranks grow and people start to use the group as a resource for promoting their project or business, we anticipate a wider audience will start to rely on it for learning about what a Citizen Observatory is, and what it can do for them. The lessons we learn, the products and services we develop and the knowledge we generate can all be channeled through the page, providing a one-stop shop for all things CO-related. 1

GEO-X summit in Geneva, January 15-16, 2014 (Hai-Ying Liu, NILU; Arne J Berre, SINTEF) CITI-SENSE has participated at the 10th GEO Plenary & Geneva Ministerial Summit alongside our sister projects. The summit brought together the Group on Earth Observations (GEO) to discuss the progress of GEOSS. The aim of the Global Earth Observation System of Systems (GEOSS) is to provide decision-support sytems to a variety of users. All information shall be made available through the internet, allowing for users easy access to existing and planned observing systems all around the world. CITI-SENSE will contribute with its outcomes to the GEOSS â&#x20AC;&#x201C; just as our sister projects. The future of the global environment depends upon how well innovative environmental solutions are integrated to produce results for policy, industry and society at large. The five projects bring together state of the art technologies and open communication capabilities. Two kinds of novel technologies applications have been developed: In situ sensors network: Thanks to recent developments, environmental sensors become constantly more accurate, smaller, cheaper and smarter. Scientific data improve our understanding and help to reduce environmental impact and risk exposure. Geo-mobile applications: Citizens are enabled to collect and automatically contribute to environmental governance. Aiming to reach the largest number of people, these applications run in all kind of mobile devices such smartphones or tablets. Collected information is integrated through dedicated platforms which facilitate discovery, distribution and sharing of data in a standard and interoperable way. Security and privacy issues are addressed by all five projects. The summit was an excellent opportunity to disseminate CITI-SENSE to a large audience within GEOSS. Posters about CITI-SENSE and all sister projects were presented and together with our sister projects, CITI-SENSE representatives also contributed with oral presentations. Further collaboration between the CO projects is now taking shape. A joint workshop in late 2014 is under preparation.

(Photo by Nicola Osborne, The University of Edinburgh)

Grass root level engagement in Ljubljana (Johanna Robinson, JSI) Each year in the last week of March, the Institute Jožef   Stefan   in   Ljubljana,   Slovenia,   organizes  the  Days  of  Jožef  Stefan  to  mark  the   birthday of this great Slovenian physicist. Over a period of one week, scientific and cultural meetings are combined with open days at the institute. During this  year’s  event,  CITI-SENSE activities in Ljubljana were presented to science enthusiasts - young and old - that took a tour of the institute premises. Overall over five hundred people visited the event. The day provided a great opportunity to get among people and spread the word out about CITISENSE project at the local ground.

Gathered at the main entrance, the local group engaged groups of visitors of various kinds from retirement home groups to school children as well as individual families, all enjoying the science oriented day. Johanna Robinson, responsible for the citizen engagement in Ljubljana recalls the event: “We prepared our CITI-SENSE stand in a way that would have eye catching components for different types of visitors. The stand included three walls of posters, one dedicated for each of the following: (1) CITI-SENSE in general, (2) CITI-SENSE in Ljubljana and (3) CITI-SENSE at schools. The half-round table surrounded by these posters was covered with communication materials; brochures for various stakeholders as well as four screens. On one screen we were running the Citizens’ observatories video, another one was to show results from one of the outdoor air quality units, the third one had a continuous power point presentation whereas on the fourth one we engaged people to participate through a questionnaire about their quality of life. In addition to these we had brought with us examples of the sensor units: We showed how practically small they are and told curious people what these units are measuring. The day also worked as the first day when citizens were informed about the mobile units. A prototype of JSI assembled unit was introduced and was showing results in real time. People could peak into the results with a QR-code placed on the table. Just the right time when visitors of more technical background arrived on our stand, also one of the developers of the   mobile   unit,   Mihael   Mohorčič,   joined   the   group   and   explained   the   demanding   visitors   all   about   the   technical capabilities of the unit.”