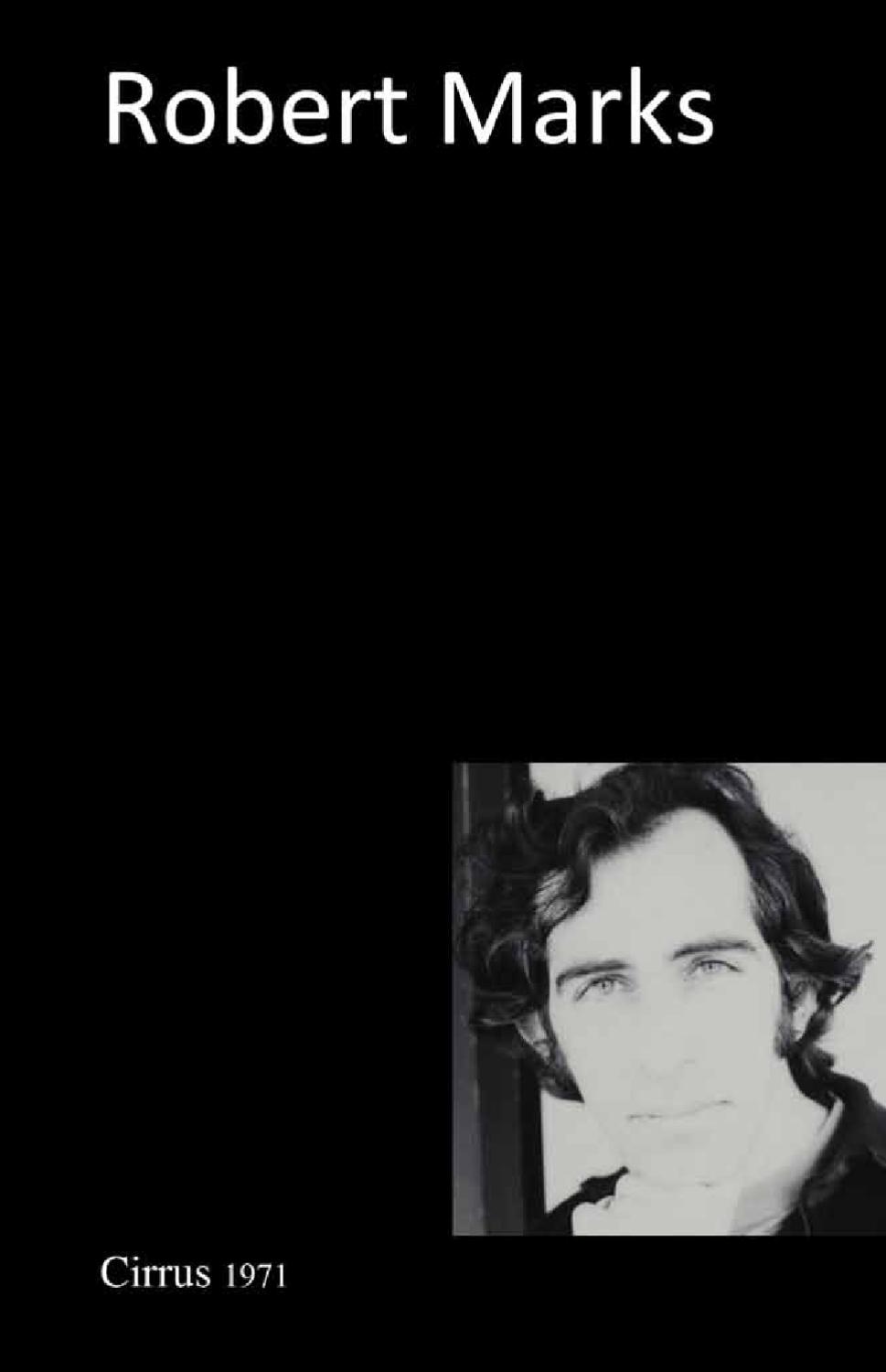 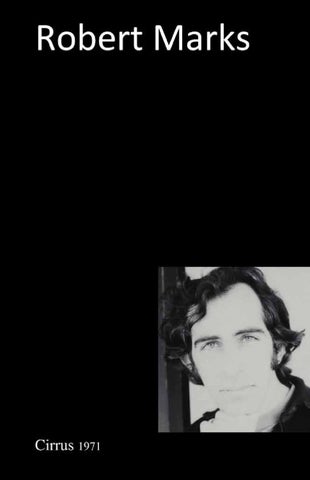 Andrea Joki The Virgin Space Gallery (now known as Cirrus Gallery) came into existence with the first solo show by Los Angeles artist Robert Marks in January 1971. The artworks included in this untitled exhibition reflect ideas and preoccupations of artists living and working in Los Angeles at the time, and echoes concerns seen in a distinctive West Coast minimalism. The cultural scene in Los Angeles in the late 1960s and early 1970s was ripe with inventive talent. Marks came of age following a time when Ferus Gallery and the Cool School artists had helped lay the groundwork for the development of particular Los Angeles artistic styles including assemblage with artists Walter Berman and Ed Kienholz; a West Coast minimalism in the works of Robert Irwin, Larry Bell and Craig Kaufman; and the unique conceptual languages of Ed Ruscha and John Baldesarri. Angeleno artists of this period often came together to live and work creating pockets of artistic activity and social networks in places such as Venice, Long Beach and downtown Los Angeles. The creative pockets where artists interacted in daily life influenced the exchange of artistic ideas and fostered opportunities for artists, curators and writers.

Marks and his fellow artist friends were part of a tight-knit group living and working downtown along Beaudry Avenue – each member branded on the hand with a rose tattoo known to the group as the “Beaudry Rose.” Marks’ dynamic social network led to his personal introduction to Milant, and ultimately to his opportunity of exhibiting new works in the gallery’s inaugural show. Identifying with his Los Angeles predecessors who, as Marks states, “took art off the canvas,” Marks’ concept-based artistic practice involves multiple processes including aluminum and acrylic glass fabrication, photography, screenprinting and painting. His unique language is a nod to 1960s Minimalist artists, such as Sol LeWitt and Donald Judd and to Joseph Albers with his critical theories relating to perception. However, Marks infuses his process and methodology with distinctive West Coast attributes as he incorporates into his work new non-traditional materials, addresses the ephemeral and evokes the metaphysical.

The focal point of the exhibition is a sixfoot cube framework constructed with aluminum H-beams that are bolted together at the corners. Commissioned as an outdoor sculpture by a private collector, this piece made its first appearance at the Virgin Space Gallery before its subsequent installation on the patron’s grass lawn. The cube framework is positioned at a forty-five degree angle with a corner penetrating the floor plane, nestled in a triangular hole where the concrete floor

The shadow has been traced and then painted, transforming an ephemeral phenomenon into a static graphic element. Marks describes his intent in fixing shadows as a method of creating, as he calls them, “implied planes.” In an interview with Art International’s contributing art critic Joseph E. Young on January 27, 1971, Marks elaborates on his conceptual inquiry: In analyzing my environment I felt that I was penetrating planes all the time. I considered walking through a doorway like breaking through a plane. Later I determined that the cube structure was a “pure” form to work with. I guess that was a kind of romantic idea giving that kind of definition, but the cube was a very good vehicle for me so that I could work with the configurations that the cube produces as light was projected through it.

and several inches of underlying earth has been removed. Marks directs a controlled light source to cast a stark shadow of the cube on the surface of the concrete floor.

Smaller-scale sculptures in the exhibition include four freestanding white pedestals. Marks’ strategy is further revealed with these more intimate sculptures. Each is conceived as a gesamtwerk where the pedestal itself is considered a sculptural element along with the language of the cube and shadows. The conceptual language Marks explores through various processes and materials is a terrain of dualities, such as transparent vs. opaque, reality vs. illusion, interior vs. exterior, nature vs. artifice.

In one pedestal piece, Marks constructs a scaled down version of the show’s centerpiece. A cobalt blue cube framework is positioned at a forty-five degree angle with the illusion that one corner is penetrating the surface on which it rests. Instead of being nestled in a cutout triangular hole like the large-scale piece, the cube meets the surface at three points. Marks’ process continues as he directs controlled lighting onto the cube framework, casting shadows of the piece from several angles. These overlapping shadows have been traced and painted in shades of blue. The web of painted shadows gives the illusion of depth and perspective and also speaks to qualities of light – intense light and stark shadows, diffuse light and soft shadows. Marks further complicates this geometric construction with an acrylic glass vitrene that encapsulates the cube framework. Reflections of cube are cast on the surface of the acrylic glass, and shadows of the vitrene’s seams are cast atop the web

of recorded shadows on the pedestal’s surface. In an early 2011 interview with gallerist Jean Milant of Cirrus Gallery, Robert Marks recalled his multiple-step process: I took photosensitive paper and set the cube structure on top of it. I exposed this to a flash of light, and everything remained black except where the cube blocked the exposure to light, leaving white lines. I had silkscreens made from the photographic images of each plane of the cube, then screenprinted these images on Plexiglas sheets cut to size. Finally, I put the Plexiglas cube together. It was a complex process at the time. I had to record my process with mock-ups so that I wouldn’t forget. When viewed from a distance, another pedestal piece stands as a square columnlike object with three stratifications. A narrow band of clear acrylic glass separates the pedestal base from a white

cube. Marks’ geometric language is visible through this see-through band, drawing the eye in and making one curious about what else may be inside. A close-up view of the work reveals that it is possible to look down into the top of the sculpture, finding a cube framework. This cube-within-acube and the overlapping shadows of the cube implies an analytical thought process concerned with mathematical concepts such as exponents and multipliers. With each piece, the repeated off-kilter positioning of a stable form gives the feeling that each iteration is a moment frozen in time, capturing the cubes in an instant as they cascade and tumble in a spot lighted environment. For me, Marks series of sculptures recall film stills and photographs of NASA’s historical moon landing in July 1969 – as earthbound humans witnessed, via television, a manmade structure float down and make contact with the moon’s stark surface. Through his explorations of object and shadow, Marks reveals his heightened sensitivity to objects in space. With his multiple illustrations of the effects of light on cube frameworks, he reveals the object and shadow as one unit and makes visual and metaphorical play of the object shifting in presence as time passes. When asked by Jean Milant about the significance of the shadows in relationship to the physicality of the cube framework, Marks expressed that, for him, the shadow of an object means the object truly exists. As with other Los Angeles artists of the late 1960s and early 1970s including Robert Irwin and John Baldesarri, both having taught classes at Chouinard Institute of Art, Marks creates a visual language that reveals a spiritual or metaphysical component. His analytical inquiry into objects in space brings to mind philosophical ideas of Plato and his Allegory of the Cave.

Although Marks insists that his ideas are straightforward and uncomplicated, a viewer that brings a knowledge of philosophy to the experience of viewing Marks works will be gratified by the elegance and lucidity of a visual language that may stand as a metaphor for the virtue of human intelligence and reasoning. Marks thoughtful and methodical artistic process makes visible those philosophical ideas and concepts that most often remain ethereal. Bibliography Catalog L.A. Birth of an Art Capital 19551985, Centre Pompidou, Paris, 2006. Jean Milant, “Interview with Robert Marks and Doug Edge,” Cirrus Gallery, Los Angeles, 2011. Morgan Neville, “The Cool School: The Story of the Ferus Art Gallery,” Arthouse Films, New York, 2007. Peter Schjeldahl, The Art World, “Way Out West,” The New Yorker, January 25, 2010, p. 76. Samuel Enoch Stumpf, Socrates to Sartre: A History of Philosophy, 2nd Edition, McGraw-Hill, New York, 1975. Joseph E. Young, “Los Angeles: Robert Marks,” Art International, Vol. XV/5, May 20, 1971. An Exhibition Catalog of Robert Marks' 1971 show at Cirrus Gallery in Los Angeles. Catalog features an essay about the show by Andrea Joki.