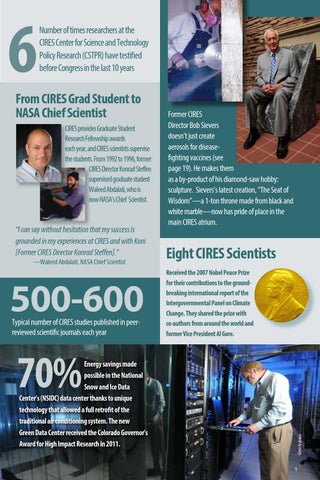 “I can say without hesitation that my success is grounded in my experiences at CIRES and with Koni [Former CIRES Director Konrad Steffen].” ­—Waleed Abdalati, NASA Chief Scientist

Former CIRES Director Bob Sievers doesn’t just create aerosols for diseasefighting vaccines (see page 19). He makes them as a by-product of his diamond-saw hobby: sculpture. Sievers’s latest creation, “The Seat of Wisdom”—a 1-ton throne made from black and white marble—now has pride of place in the main CIRES atrium.

Eight CIRES Scientists Received the 2007 Nobel Peace Prize for their contributions to the groundbreaking international report of the Intergovernmental Panel on Climate Change. They shared the prize with co-authors from around the world and former Vice President Al Gore.

Energy savings made possible in the National Snow and Ice Data Center’s (NSIDC) data center thanks to unique technology that allowed a full retrofit of the traditional air conditioning system. The new Green Data Center received the Colorado Governor’s Award for High Impact Research in 2011.

A periodic magazine covering the broad range of research done at the Cooperative Institute for Environmental Sciences at the University of Colorado at Boulder. 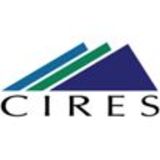