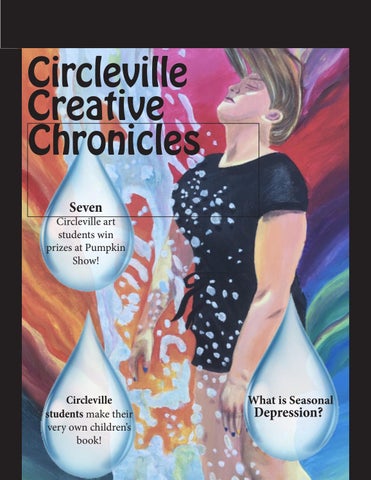 The Crew Gabrielle Ortiz (Cover Artist) - “At first I was stressed because I wasn’t sure how the painting would turn out, but the more I worked on it, the more I liked it. I am proud of the work I produced because I spent a lot of time going back and making changes to make it better.”

It was the first day of fall and I wanted to do something fun with my friend. I said â&#x20AC;&#x153;what is the most fall thing you can think of ?â&#x20AC;?, and Elli suggested a farmers market. The pumpkins and decorations here made me really feel like it was fall despite the 70 degree weather.

I asked Ava about this project and what made her want to take these pictures. Ava states that she loves flowers and pumpkins in the fall.

Me: What made you want to go to Rhoad’s ? Ava: I thought it was a good place to go to. Me: What is your favorite thing at the farmers market? Ava: The mums are very beautiful to me. This picture to the right is Ava’s favorite.

These pictures were taken at Rhoad’s Garden Center.

What is macro photography? In this type of photography, it is all about capturing objects that are close to the lens, film, or the sensor of the camera. Macro images may show the subject in incredible detail. or may leave the viewer guessing what was even photographed.

“When I decided to use makeup and the use of different eyeshadow looks as my photography project, at first I felt like I was taking a big risk,” said Makala McMurray. “Not many people realize that makeup itself plays a huge role in art and creativity. Then again that should be the very reason why I should incorporate the idea, so that more people are pushed and inspired to express themselves in many different ways. Especially with eyes, they are the windows to our soul. Not one is the same out of 7.7 billion people in the world. So what better way to use something so beautiful and mysterious than to make it into art?”

Phantom’s Tale is a photo collage by Andrew Theller. The collage is a metaphor for Seasonal Affective Disorder, or “seasonal depression” for short. The project was completed on October 2nd, 2019. It tells the story of a ghost who wanders the Earth, following his past self around.

“What real-life situation inspired this project?” I’m not a chronically depressed person by any means. In the winter of 2018-2019, I hit a low. In a short amount of time, I lost my dog, my girlfriend, and my godfather that I was very close to. Just a couple of months before that I had been kicked out of my mom’s house. I had to move for my twelfth time in six years. I remember feeling completely alone, on top of all of that, the weather made me feel completely exhausted. I ended up getting the feeling that depression was always watching me, and it was physically present. “What was your goal with these photos?” My goal with this project was to translate the feelings of isolation and doom that I feel in the winter. That there’s this faceless thing coming for you. You can’t run and hide, you just have to brace yourself for when it shows up. With that said though, my priority with any piece of art is to influence somebody and to make something that can permanently change someone. “What other pieces of art inspired you?” I would say two albums that inspired me are i, i by Bon Iver and A Different Shade of Blue by Knocked Loose. The movies Interstellar and A Ghost Story inspired this too. Those works all have one thing in common: they are immediately striking. They made me want to make something that hits you hard and then when you think of the meaning behind it, it hits you again. I’m not sure if I’ve made something quite that powerful, but that was certainly my intent.

A Different Shade of Blue

The technique of depicting an object in a picture to produce an illusion of projecting or extension. Lucky Donaldson Cole Radcliff

“My favorite piece I’ve made this year is my water painting. This is my favorite because I find it to be humorous and it brings a smile to others’ faces.” - Tasha Rice

Krista Szymczak â&#x20AC;&#x153;I used acrylic paint for my monochromatic pieces. Doing monochromatics are one of my favorite things to do in AP art.â&#x20AC;?- Krista

Barthe “Art should comfort the disturbed and disturb the comfortable. That means the artist can process their emotions and thoughts in art and at the same time be challenging the viewer either because they can look in a “mirror” or because there is a lot to observe in general.”

“Here, at school, I experienced art more as a common joy, while in Germany, in the graffiti or street art scene, I experienced it as a competition but also as a culture and a scene. I would encourage artists here to be more confident about themselves and to the artists in germany to be more humble and respectful.” -Philipp Barthe

What difficulties did you face with planning you first competion? The biggest challenge in hosting an event of thi size is getting volunteers for so many different responsibilities. How was it different from a normal competition Many competitions can rely on traditions to dra in performers, and we are hoping to establish new traditions here. Would you want to do it again? This event was extremely successful we would love to continue to host bands here!

Do you think you should of qualified at any other competion? I think we could have qualified at the OSU invitational. It was an amazing performance from all members of the band. We did take home Best Auxiliary: Class B, so earning anything at OSU made everyone happy.

Will I See The Pumpkin Man? Within the period of roughly three weeks four students were able to put an astonishing children’s book together, “Will I See The Pumpkin Man?” To the thanks of Mrs. Grady and Ms. Lombardo, these teens are now able to say they are published writers and illustrators. “I couldn’t be more proud of them,” Lombardo stated. “I want them to see they can make their dreams come true if they’re willing to work hard enough and let their imagination soar.”

These students were even able to read their story to elementary school students with their district, along with showing them how they went about creating art for the book. Afterward the authors and illustrators were interviewed by the Circleville Herald and Columbus Dispatch.

The students were later invited to appear on NBC4 soon after their reading. Then the students were interviewed again at the Circleville Pumpkin Show on NBC4 by Cameron Fontana.

I see the edge, I want to go But the king won’t let us go below Daphne is stepped on like soft snow Lex feels pain even though his jump was long ago I can’t help but wonder about the ground while it’s aglow I don’t want to be declared irrational though I feel unsafe in my own borough Hiding him from the patrol is the least I can bestow Judas escapes the king and now must lay low The corruption is too much for me to undergo I must stand tall like a weeping willow The pain from poison seeping into me is worse than anything you know I am brought to the bird while unconscious, which is hidden deep below Sending a message to Pen is significant so I must tell her the status quo Here in the clock tower there is no light to show Now under the burned flower shop we forgo Amy’s physical state becomes touch and go Princess Celeste snuck aboard and now she’s in the know Through space we go We are here and the ground is covered in snow Brooklyn Selmon

Poetic Summary of The Hobbit

Bilbo was a hobbit In whose small hobbit-hole Sat a wizard and 13 dwarves And of adventure and treasures they told Off went the company With gloomy hearts Because they could not get A fire to start Gandalf left them to go elsewhere and into Mirkwood the rest went Feeling the black stream, spiders, and darkness’ wrath

Poetic Summary of Kingdom of Ash and Briars

Bristal’s taken to the water She’s nervous, scared, and cold Elwood is kind but needs to feed his daughter So in she goes, it might be the end but she must live for the story to unfold Out she comes not quite the same But she’s not in the clear quite yet She’s in Darmeska with new fame With immortality, she needs a new mindset When given a child what do you do? Her name is Rosie, she’s young and sweet And she’s a princess too If she dies it means defeat Bristal’s off to join the troops With Anthony, she’ll become a knight But she’s can’t do that as a woman whoops So she’ll become a dude and act like a plight It’s almost the end Tamarice is back and evil And Bristal’s lost a friend Yet agents all odds there’s upheaval Sydney Williams

THE CREW Created By: Jaden Blair 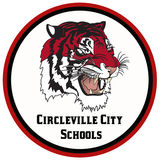 Circleville High School Creative Chronicles is now available for viewing on Issuu! Created by CHS students under the direction of art teache...

Circleville High School Creative Chronicles is now available for viewing on Issuu! Created by CHS students under the direction of art teache...