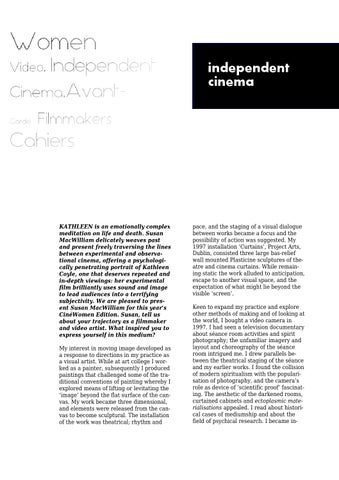 pace, and the staging of a visual dialogue between works became a focus and the possibility of action was suggested. My 1997 installation ‘Curtains’, Project Arts, Dublin, consisted three large bas-relief wall mounted Plasticine sculptures of theatre and cinema curtains. While remaining static the work alluded to anticipation, escape to another visual space, and the expectation of what might lie beyond the visible ‘screen’.

My interest in moving image developed as a response to directions in my practice as a visual artist. While at art college I worked as a painter, subsequently I produced paintings that challenged some of the traditional conventions of painting whereby I explored means of lifting or levitating the ‘image’ beyond the flat surface of the canvas. My work became three dimensional, and elements were released from the canvas to become sculptural. The installation of the work was theatrical; rhythm and

Keen to expand my practice and explore other methods of making and of looking at the world, I bought a video camera in 1997. I had seen a television documentary about séance room activities and spirit photography; the unfamiliar imagery and layout and choreography of the séance room intrigued me. I drew parallels between the theatrical staging of the séance and my earlier works. I found the collision of modern spiritualism with the popularisation of photography, and the camera’s role as device of ‘scientific proof’ fascinating. The aesthetic of the darkened rooms, curtained cabinets and ectoplasmic materialisations appealed. I read about historical cases of mediumship and about the field of psychical research. I became in- 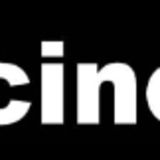