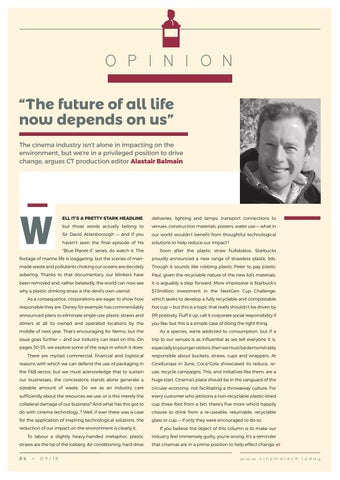 o p i n i o n “The future of all life now depends on us” The cinema industry isn’t alone in impacting on the environment, but we’re in a privileged position to drive change, argues CT production editor Alastair Balmain

but those words actually belong to

venues, construction materials, posters, water use — what in

Sir David Attenborough — and if you

haven’t seen the final episode of his

solutions to help reduce our impact?

“Blue Planet II” series, do watch it. The

footage of marine life is staggering, but the scenes of man-

made waste and pollutants choking our oceans are decidely

Though it sounds like robbing plastic Peter to pay plastic

sobering. Thanks to that documentary, our blinkers have

Paul, given the recyclable nature of the new lid’s materials,

been removed and, rather belatedly, the world can now see

it is arguably a step forward. More impressive is Starbuck’s

why a plastic drinking straw is the devil’s own utensil.

As a consequence, corporations are eager to show how

which seeks to develop a fully recyclable and compostable

responsible they are. Disney, for example, has commendably

PR positivity. Fluff it up, call it corporate social responsibility if

stirrers at all its owned and operated locations by the

you like, but this is a simple case of doing the right thing.

middle of next year. That’s encouraging for Nemo, but the

As a species, we’re addicted to consumption, but if a

issue goes further — and our industry can lead on this. On

trip to our venues is as influential as we tell everyone it is,

especially to younger visitors, then we must be demonstrably

There are myriad commercial, financial and logistical

responsible about buckets, straws, cups and wrappers. At

reasons with which we can defend the use of packaging in

CineEurope in June, Coca-Cola showcased its reduce, re-

the F&B sector, but we must acknowledge that to sustain

use, recycle campaigns. This, and initiatives like them, are a

our businesses, the concessions stands alone generate a

huge start. Cinema’s place should be in the vanguard of the

sizeable amount of waste. Do we as an industry care

circular economy, not facilitating a throwaway culture. For

sufficiently about the resources we use, or is this merely the

every customer who jettisons a non-recyclable plastic-lined

collateral damage of our business? And what has this got to

do with cinema technology…? Well, if ever there was a case

choose to drink from a re-useable, returnable, recyclable

for the application of inspiring technological solutions, the

glass or cup — if only they were encouraged to do so.

reduction of our impact on the environment is clearly it.

straws are the tip of the iceberg. Air conditioning, hard drive

that cinemas are in a prime position to help effect change.

Inside the September 2018 issue of Cinema Technology, our focus is on the circular economy — what lengths do exhibitors go to when they redu...

Inside the September 2018 issue of Cinema Technology, our focus is on the circular economy — what lengths do exhibitors go to when they redu...