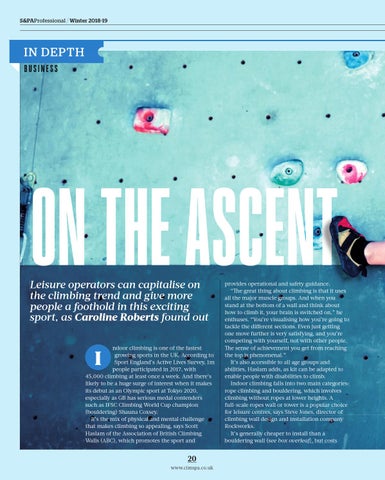 ON THE ASCENT Leisure operators can capitalise on the climbing trend and give more people a foothold in this exciting sport, as Caroline Robertss found out

ndoor climbing is one of the fastest growing sports in the UK. According to Sport England’s Active Lives Survey, 1m people participated in 2017, with 45,000 climbing at least once a week. And there’s likely to be a huge surge of interest when it makes its debut as an Olympic sport at Tokyo 2020, especially as GB has serious medal contenders such as IFSC Climbing World Cup champion (bouldering) Shauna Coxsey. It’s the mix of physical and mental challenge that makes climbing so appealing, says Scott Haslam of the Association of British Climbing Walls (ABC), which promotes the sport and

provides operational and safety guidan nce. guidance. “The great thing about climbing is that t it uses all the major muscle groups. And whe en you when stand at the bottom of a wall and thin nk about think how to climb it, your brain is switched d on,” he enthuses. “You’re visualising how you u’re going to you’re tackle the diﬀerent sections. Even justt getting one move further is very satisfying, an nd you’re and competing with yourself, not with oth her people. other The sense of achievement you get from m reaching the top is phenomenal.” It’s also accessible to all age groups and abilities, Haslam adds, as kit can be ad dapted to adapted enable people with disabilities to climb. clim mb. Indoor climbing falls into two main n categories: rope climbing and bouldering, which involves climbing without ropes at lower heigh hts. A heights. full-scale ropes wall or tower is a popular popu ular choice for leisure centres, says Steve Jones, director irector of climbing wall design and installation company Rockworks. It’s generally cheaper to install than a bouldering wall (see box overleaf), f but costs 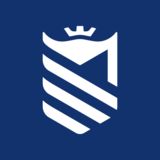 The new year has arrived and as we all work off those post-holiday blues, make sure to check out the Winter Edition of S&PA Professional mag...

The new year has arrived and as we all work off those post-holiday blues, make sure to check out the Winter Edition of S&PA Professional mag...