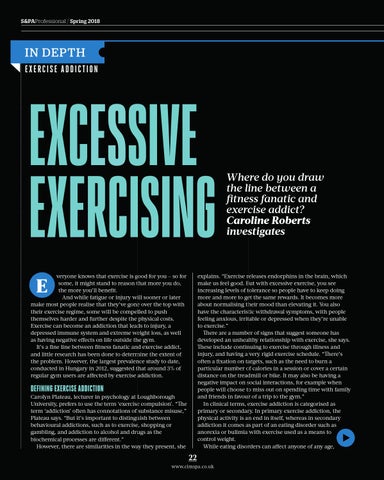 Where do you draw the line between a ﬁtness fanatic and exercise addict? Caroline Roberts investigates

explains. “Exercise releases endorphins in the brain, which make us feel good. But with excessive exercise, you see increasing levels of tolerance so people have to keep doing more and more to get the same rewards. It becomes more about normalising their mood than elevating it. You also have the characteristic withdrawal symptoms, with people feeling anxious, irritable or depressed when they’re unable to exercise.” There are a number of signs that suggest someone has developed an unhealthy relationship with exercise, she says. These include continuing to exercise through illness and injury, and having a very rigid exercise schedule. “There’s often a ﬁxation on targets, such as the need to burn a particular number of calories in a session or cover a certain distance on the treadmill or bike. It may also be having a negative impact on social interactions, for example when people will choose to miss out on spending time with family and friends in favour of a trip to the gym.” In clinical terms, exercise addiction is categorised as primary or secondary. In primary exercise addiction, the physical activity is an end in itself, whereas in secondary addiction it comes as part of an eating disorder such as anorexia or bulimia with exercise used as a means to control weight. While eating disorders can aﬀect anyone of any age,

veryone knows that exercise is good for you – so for some, it might stand to reason that more you do, the more you’ll beneﬁt. And while fatigue or injury will sooner or later make most people realise that they’ve gone over the top with their exercise regime, some will be compelled to push themselves harder and further despite the physical costs. Exercise can become an addiction that leads to injury, a depressed immune system and extreme weight loss, as well as having negative eﬀects on life outside the gym. It’s a ﬁne line between ﬁtness fanatic and exercise addict, and little research has been done to determine the extent of the problem. However, the largest prevalence study to date, conducted in Hungary in 2012, suggested that around 3% of regular gym users are aﬀected by exercise addiction.

DEFINING EXERCISE ADDICTION Carolyn Plateau, lecturer in psychology at Loughborough University, prefers to use the term ‘exercise compulsion’. “The term ‘addiction’ often has connotations of substance misuse,” Plateau says. “But it’s important to distinguish between behavioural addictions, such as to exercise, shopping or gambling, and addiction to alcohol and drugs as the biochemical processes are diﬀerent.” However, there are similarities in the way they present, she

This issue includes coverage on how investing in staff development is paying dividends for CIMSPA employer partner York Sport, an in-depth conversation with Max Quittendon about cross-sector collaboration at Elevate 2018, and new studies which help to draw the line between fitness fanatic and exercise addict.