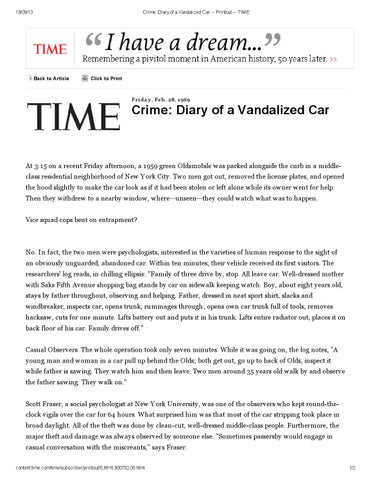 Crime: Diary of a Vandalized Car

At 3:15 on a recent Friday afternoon, a 1959 green Oldsmobile was parked alongside the curb in a middleclass residential neighborhood of New Y ork City. Two men got out, removed the license plates, and opened the hood slightly to make the car look as if it had been stolen or left alone while its owner went for help. Then they withdrew to a nearby window, whereâ&amp;#x20AC;&amp;#x201D;unseenâ&amp;#x20AC;&amp;#x201D;they could watch what was to happen. Vice squad cops bent on entrapment?

No. In fact, the two men were psychologists, interested in the varieties of human response to the sight of an obviously unguarded, abandoned car. Within ten minutes, their vehicle received its first visitors. The researchers&#39; log reads, in chilling ellipsis: &quot;Family of three drive by, stop. All leave car. Well-dressed mother with Saks Fifth Avenue shopping bag stands by car on sidewalk keeping watch. Boy, about eight years old, stays by father throughout, observing and helping. Father, dressed in neat sport shirt, slacks and windbreaker, inspects car, opens trunk, rummages through; opens own car trunk full of tools, removes hacksaw, cuts for one minute. Lifts battery out and puts it in his trunk. Lifts entire radiator out, places it on back floor of his car. Family drives off.&quot; Casual Observers. The whole operation took only seven minutes. While it was going on, the log notes, &quot;A young man and woman in a car pull up behind the Olds; both get out, go up to back of Olds, inspect it while father is sawing. They watch him and then leave. Two men around 35 years old walk by and observe the father sawing. They walk on.&quot; Scott Fraser, a social psychologist at New Y ork University, was one of the observers who kept round-theclock vigils over the car for 64 hours. What surprised him was that most of the car stripping took place in broad daylight. All of the theft was done by clean-cut, well-dressed middle-class people. Furthermore, the major theft and damage was always observed by someone else. &quot;Sometimes passersby would engage in casual conversation with the miscreants,&quot; says Fraser. content.time.com/time/subscriber/printout/0,8816,900702,00.html

By the end of the first 26 hours, a steady parade of vandals had removed the battery, radiator, air cleaner, radio antenna, windshield wipers, right-hand-side chrome strip, hubcaps, a set of jumper cables, a gas can, a can of car wax, and the left rear tire (the other tires were too worn to be interesting). Nine hours later, random destruction began when two laughing teen-agers tore off the rearview mirror and began throwing it at the headlights and front windshield. Into the Carriage. Eventually, five eight-year-olds claimed the car as their private playground, crawling in and out of it and smashing the windows. One of the last visitors was a middle-aged man in a camel&#39;s hair coat and matching hat, pushing a baby in a carriage. He stopped, rummaged through the trunk, took out an unidentifiable part, put it in the baby carriage, and wheeled off. This serious version of Candid Camera was one of several similar experiments which have been organized recently by Philip Zimbardo, 35, a New Y ork born psychologist now at Stanford University. His tentative conclusion is that in offices, schools and streets, a big-city feeling of personal anonymity encourages destructive behavior. It is discouraged by a sense of communityâ&amp;#x20AC;&amp;#x201D;an atmosphere in which vandals feel that anyone watching disapproves of what they are doing. To check his theory, Zimbardo parked a derelict car in a middle-class neighborhood of suburban Palo Alto, California. During three days of observation, he reports, it was not touched once. Click to Print