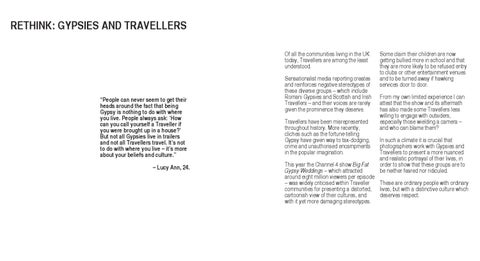 RETHINK: GYPSIES AND TRAVELLERS Of all the communities living in the UK today, Travellers are among the least understood.

“People can never seem to get their heads around the fact that being Gypsy is nothing to do with where you live. People always ask: ‘How can you call yourself a Traveller if you were brought up in a house?’ But not all Gypsies live in trailers and not all Travellers travel. It’s not to do with where you live – it’s more about your beliefs and culture.” – Lucy Ann, 24.

Sensationalist media reporting creates and reinforces negative stereotypes of these diverse groups – which include Romani Gypsies and Scottish and Irish Travellers – and their voices are rarely given the prominence they deserve. Travellers have been misrepresented throughout history. More recently, cliches such as the fortune-telling Gypsy have given way to tax-dodging, crime and unauthorised encampments in the popular imagination.

Some claim their children are now getting bullied more in school and that they are more likely to be refused entry to clubs or other entertainment venues and to be turned away if hawking services door to door. From my own limited experience I can attest that the show and its aftermath has also made some Travellers less willing to engage with outsiders, especially those wielding a camera – and who can blame them? In such a climate it is crucial that photographers work with Gypsies and Travellers to present a more nuanced and realistic portrayal of their lives, in order to show that these groups are to be neither feared nor ridiculed.

This year the Channel 4 show Big Fat Gypsy Weddings – which attracted around eight million viewers per episode – was widely criticised within Traveller These are ordinary people with ordinary communities for presenting a distorted, lives, but with a distinctive culture which cartoonish view of their cultures, and deserves respect. with it yet more damaging stereotypes.

“Ahh…the stereotype of the dirty Gypsy. You do get dirty Gypsies – I’d be lying if I said you didn’t. You also get horrible Gypsies, thieving Gypsies…all the cliches. You’re bound to though aren’t you? As a culture we are no different from anyone else in that respect. We are fallible but what the settled population often fails to appreciate is that these people are a tiny minority. We aren’t all the same, and we shouldn’t be treated as if we are.” – Joe, 34

The exact UK Gypsy/Traveller population is unknown but estimates range between 90,000 and 120,000. Large numbers live in houses, with others on sites which are either owned privately or by local authorities and, in a few cases, unauthorised encampments.

“A lot of the German companies like Hobby and Tabbert do a Traveller spec though, which has no running water inside them – no toilets, no sink. We won’t use them and it’s a waste of space…every bit of space counts in these things.”

Trailers are a major investment and are regularly traded in. The wealthiest Travellers may buy new from specialist dealers but many buy second-hand.

In many cases, caravans will only be lived in for 12 months before being sold on so it is important to keep them in good condition so they hold their value. Bunks, rugs and even tables are frequently covered in plastic to protect them – and to make them easier to clean.

“At one time you could get a Roma trailer or a Buccaneer and have it custom made. You could go in and say: ‘Right, I want leather bunks, I want this type of Formica, I want the fire on the left hand side and not the right hand side, I want horse-shoe bunks, this type of floor, this colour glass, I want less chrome on the outside, I want more chrome,” explains Joe, 34, an English Gypsy who manages a local authority site in the north of England.

For many, the daily routine includes tidying and wiping the sideboards, windows and floor. For those on sites, the ‘shed’ (toilet/kitchen block) may be cleaned daily. The ‘slab’ (outdoor area around the trailers) is regularly washed down with disinfectant. Every few days the under-sides of the bunks are wiped down and the exteriors of the trailers “But people don’t really do that anymore are washed. so they’re all standard spec. Doing that would be really expensive – maybe Living in such confined spaces means £10,000 more than a standard trailer tidiness is essential, but another the same size. motivation is the judgement of others.

“Most of us are really house-proud,” says Sabrina, 29, a Scottish Traveller and single mother of four. “That’s why you find plastic on the bunks in almost any trailer you go into. We do that because it keeps the material nice and clean but also if kids spill something it’s more hygienic, and you can wipe it easily. “I do the plastic myself – you just buy rolls of plastic and fold it over. I have to wash my bunks at least once a week because I’d be shamed to death if anyone was to come in and lift them when they were dirty. You’re in a bit of a fishbowl in a trailer. Travellers do talk about each other and I’d have a name for myself because of the number of sweeties and bits of rubbish which would be under there. “In Traveller society today, there’s always competition going on among the young ones – the best trailer, the best mats, the best crystal. If you haven’t got the money to have a new trailer, you have to be in competition to have the cleanest one. I come last because this is an old trailer but I don’t care as long as my place is clean.”

“It’s who I am, but it’s not all there is about me. As a Gypsy girl you almost have two separate lives. Our community has very strict morals, so there comes a point when you have to filter out some of your friends. At 14 I said I wasn’t going back to school, yet today I’m a qualified chartered accountant and business coach and involved in Traveller groups. You get really fed up with people treating you in a certain way because of what you are.”

“I was born into travelling – it’s a way of life. We have a sense of freedom and I’m my own person. We live by laws – the laws of the land and those of Gypsy people, such as dignity. We oppose most things which are bad for children, such as drugs. Unfortunately when Gypsy people live in houses, they sometimes get mixed up in these sorts of things.”

“You can be a Traveller and live in a house, or a Gorja [non-Gypsy] and live in a trailer. My family has lived in houses and trailers at different times. I think being a Gypsy is more about the culture and the values really. You have huge respect for your family. I suppose it’s also about not having sex before marriage. We have quite traditional values, but in a good way.”

“We’ve travelled all over for work – the UK but also Belgium, Holland and other places. We’re a bit more settled now and living near some of the family. What a lot of people don’t seem to see is that there’s are good and bad in every community. Travellers aren’t all the same.”

“When you [non-Travellers] go home at night and shut the door, you might not even know the people who live in the houses next door. But here on this site my door is never locked. Anybody can visit me any time of the day or night. I know everyone here – not just my neighbours on either side, but everybody on the site.”

“We’re different to your kind of people. We can do what we want and be who we want to be. We move up and down with our trailers. We meet new people, make new friends and get to see new places. But there’s places around here that won’t let us in because a few Travellers at some point have caused trouble. The bowling alley turns us away if we try to get in. It’s not really fair.”

“I tend to call myself a Traveller because at school we’d get tortured if we said ‘Gypsy’. I would prefer not to wear any label – I’d rather be seen as just a person, but I’ll never have that. I try to keep myself to myself – we just want a quiet life. If I go into town I prefer people not to know I’m a Gypsy because you always end up with someone making a big show of it, and we don’t get treated the same as other people. So even though I’m very proud of who I am, for peace sake I would rather some people not know.”

“It’s just something I’ve always been. It’s not about where you live, it’s more than that.”

“We shouldn’t be judged any different to anyone else. We are all basically the same.”

“Travellers are being forced into houses but we don’t have the 2.4 children that other people have. I’m one of six children, my mum’s one of 14, and we are loud. If they put us in a house together the neighbours would be complaining about the noise. So neighbours don’t like us, which causes problems in the area, and that has a ripple effect.”

“A Traveller woman lives outside – I’m in and out of that trailer door a million times a day, especially in the summer. It’s an outdoor kind of life. My daughter’s in a house so her kids can go to school, but I don’t like those four walls, all closed in and confined. This is just what I’m used to, what I was born into.”

“Being a Traveller means I can please myself. I don’t have to go to work – I do whatever I want to do and my husband’s his own boss. We can move up and down whenever we want. We don’t take orders off anybody.”

“Being a Scottish Traveller to me is a sense of belonging really.We’ve got our values from the generation before us and it’s up to us to pass it on. That’s a responsibility as well. There’s definitely a sense of being different and a real pride in who we are. For me personally, if I’m driving past and see another Gypsy or Traveller, it’s like magnets, we attract one another. Just a look says: ‘I’m the same as you’. That’s a proud thing. It’s a hidden silence between two people but you know you’re the same.”

Part of an ongoing project challenging the prevailing visual representation of indigenous Gypsies and Travellers and migrant Roma. For more please see my website http://www.ciaraleeming.co.uk and my Roma project site http://theromaproject.com/ 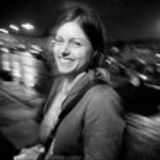