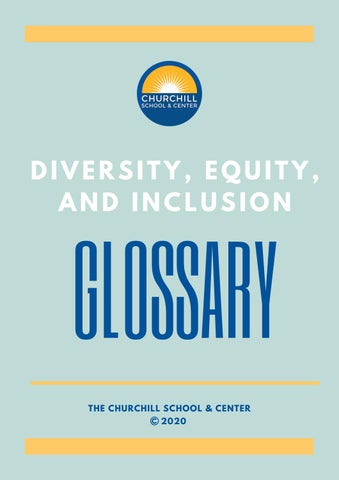 GLOSSARY OVERVIEW Conversations around diversity, equity and inclusion are broad and constantly expanding. Depending on lived experiences, the words we use might hold different meanings for different people. The purpose of this glossary is to promote dialogue around equity and inclusion work at the Churchill School &amp; Center. This glossary is not meant to be exhaustive since language is continuously evolving. The Diversity, Equity, and Inclusion Glossary is updated on an annual basis to ensure that the content reflects the evolution of equity work. We actively encourage feedback to promote improvement; for any suggestions, please contact Ashley Greene, Director of Diversity, Equity, and Inclusion at agreene@churchillschoolnyc.org.

DEFINITIONS Ableism | A system of superiority and discrimination that provides or denies resources, agency, and dignity based on oneâ&amp;#x20AC;&amp;#x2122;s abilities: mental, intellectual, emotional, and/or physical. [Source: Anti-Violence Project] Ally | Someone who makes the commitment and effort to recognize their privilege (based on gender, class, race, sexual identity, etc.) and work in solidarity with oppressed groups in the struggle for justice. Allies understand that it is in their own interest to end all forms of oppression, even those from which they may benefit in concrete ways. [ Source: Leadership Strategies] Anti-racism | The work of actively dismantling racism by advocating for changes in political, economic, and social life. Anti-racism can be an individualized and/or collective approach set up in opposition to organizational and individual racist behaviors and impacts. [Source: Race Forward] Diversity | The presence, acceptance, and appreciation of varied cultures.Â The concept of diversity embraces the wide range of human characteristics used to mark or identify individual and group identities. These characteristics include, but are not limited to, ethnicity, race, national origin, age, personality, sexual orientation, gender, class, religion, ability, and linguistic preferences. Diversity is a term used as shorthand for visible and quantifiable statuses, but diversity of thought and ways of knowing, being, and doing are also understood as natural, valued, and desired states, the presence of which benefit organizations, workplaces, and society. [Source: National Association of Independent Schools] Equity |Â A condition that balances two dimensions: fairness and inclusion. As a function of fairness, equity implies ensuring that people have what they need to participate in school life and reach their full potential. Equitable treatment involves eliminating barriers that prevent the full participation of all individuals. As a function of inclusion, equity ensures that essential educational programs, services, activities, and technologies are accessible to all. Equity is not equality; it is the expression of justice, ethics, multi-partiality, and the absence of discrimination. [Source: National Association of Independent Schools]

Ethnicity | A social construct which divides individuals into smaller social groups based on characteristics such as a shared sense of group membership, values, behavioral patterns, language, political and economic interests, history, and ancestral geographical base. [Source: Our Research – ProInspire] Gender | A set of cultural identities, expressions, and roles – codified as feminine or masculine – that are assigned to people, based upon the interpretation of their bodies, and more specifically, their sexual and reproductive anatomy. Since gender is a social construction, it is possible to reject or modify the assignment made and develop something that feels truer and just to oneself. [Source: GLSEN] Gender Expression | External appearance of one&#39;s gender usually expressed through behavior, clothing, haircut, or intonation. [Source: Gender Spectrum] Gender Identity | A person’s innermost concept of self as male, female, a blend of both or neither – how individuals perceive themselves and what they call themselves. A person’s gender identity can be the same or different from their biological sex. Cisgender | Describes a person whose gender identity and gender expression match the gender typically associated with their biological sex. Gender Non-Binary | A term of self-identification for people who do not identify within the limited and binary terms that have described gender identity: male or man, female or woman. Genderfluid | Individuals whose gender varies over time. A gender fluid person may at any time identify as male, female, agender, any other nonbinary identity, or some combination of identities. Genderqueer | Describes a person who identifies outside of the binary of male/man and female/woman. It is also used as an umbrella term for many gender non-conforming or nonbinary identities (i.e. agender, bi-gender, genderfluid). Transgender | An umbrella term used to describe a person whose gender identity and sex assigned at birth do not correspond. [Source: Gender Spectrum]

Implicit Bias | The attitudes or stereotypes that affect our understanding, actions, and decisions in an unconscious manner. These biases, which encompass both favorable and unfavorable assessments, are activated involuntarily and without an individual’s awareness or intentional control. Residing deep in the subconscious, these biases are different from known biases that individuals may choose to conceal for the purposes of social and/or political correctness. Notably, implicit biases have been shown to trump individuals’ stated commitments to equality and fairness, thereby producing behavior that diverges from the explicit attitudes that many people profess. [Source: Kirwan Institute and Racial Equity Tools] Inclusion | Authentically bringing traditionally excluded individuals and/or groups into processes, activities, and decision/policymaking in a way that shares power. [Source: Leadership Strategies] Intersectionality | The idea that various biological, social, and cultural categories-- including gender, race, class, ethnicity, and social categories-interact and contribute towards systematic social inequality. This concept recognizes that individuals: 1) belong to more than one social category simultaneously and 2) may experience either privileges or disadvantages on that basis depending on circumstances and relationships. [Source: Kimberlé Williams Crenshaw] LGBTQ+ | Stands for Lesbian, Gay, Bisexual, Transgender, and Queer; the “plus” is intended as an all-encompassing representation of sexual orientations and gender identities. [Source: Human Rights Campaign] Microaggression | The everyday verbal, nonverbal, and environmental slights, snubs, or insults, whether intentional or unintentional, which communicate hostile, derogatory, or negative messages to target persons based solely upon their marginalized group membership. These messages may be sent verbally, (&quot;You speak good English&quot;), non-verbally (clutching one&#39;s purse more tightly around people from certain race/ethnicity), or environmentally (symbols like using Native American mascots). [Source: “Microaggressions: More than Just Race,”] Privilege | Any unearned benefit, position, power, right, or advantage one receives in society because of their identity. Individuals cannot “opt-out” of systems of privilege; rather these systems are inherent to the society in which we live. [Source: Colors of Resistance]

Race | A social construct that divides people into smaller social groups based on characteristics most typically skin color. Racial categories were socially constructed and artificially created whiteness as one of the elements of the dominant culture. Race was created to concentrate power and advantage people who are defined as white and justify dominance over non-white people. The idea of race has become embedded in our identities, institutions, and culture, and influences life opportunities, outcomes, and experiences. Racial categories change based on the political convenience of the dominant society at a given period of time. [Source: Racial Equity Resource Guide and Racial Equity Tools] Racism | A way of representing or describing race that creates or reproduces structures of domination based on racial categories. In the United States, it is grounded in the creation of a white dominant culture that reinforces the use of power to create privilege for white people while marginalizing people of color, whether intentional or not. It is perpetuated in many forms of racism that include: Individual racism | An individual’s beliefs, attitudes, and actions that perpetuate racism. Interpersonal racism | When individuals express their beliefs and attitudes with another person that perpetuates racism. Internalized racism | When people of color, knowingly or unknowingly, accept and integrate negative racist images, beliefs, and identities to their mindset. Institutional racism | Intentional or unintentional, laws, organizational practices, policies, and programs that work to the benefit of white people and to the detriment of people of color. Systemic racism | The way an entire system collectively contributes to racial inequities. This includes health, environmental, education, justice, government, economic, financial, transportation, and political systems. Structural racism | The interplay of laws, practices, policies, programs, and institutions of multiple systems, which leads to adverse outcomes and conditions for communities of color compared to white communities. [Source: Racial Equity Resource Guide and Racial Equity Tools]

Sexual Orientation | The inner feelings of who a person is attracted to emotionally and/or physically, in relation to their own gender identity. Some people may identify as “asexual,” “bisexual,” “gay,” “lesbian,” “pansexual,” “queer,” “straight,” and many more. [Source: GLSEN] Social Class | Refers to people’s socio-economic status, based on factors such as wealth, occupation, education, income, etc. [National Association of Independent Schools]

Conversations around diversity, equity, and inclusion are broad and constantly expanding. Depending on lived experiences, the words we use might hold different meanings for different people. The purpose of this glossary is to promote dialogue around equity and inclusion work at the Churchill School & Center. 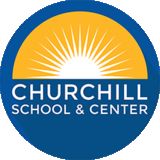