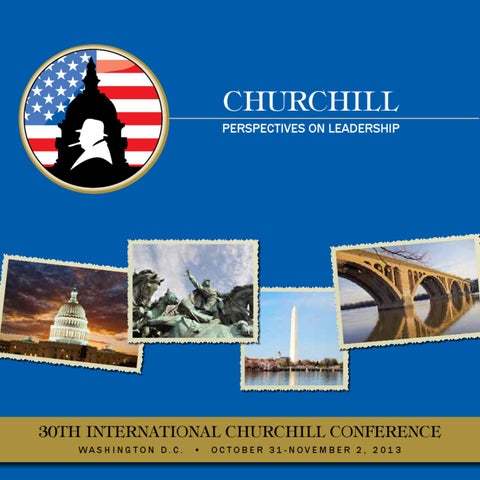 The Churchill Centre in Partnership with

Churchill Perspectives on Leadership Winston Churchill visited Washington DC a dozen times in his long life—probably more visits than to any other city outside Britain. He came not for the many sights, of course, but to connect with the nation’s leaders in the White House and in Congress. Mostly he came to talk with presidents . . .from McKinley to Eisenhower. The 30th International Churchill Conference will focus on those vital relationships as well as other leadership perspectives over more than six decades. The Churchill Centre, in partnership with The George Washington University, will present the conference in the heart of the nation’s capital. A far larger and more cosmopolitan city than the one Churchill knew, Washington offers unparalleled visitor services including dozens of world-class museums, hundreds of restaurants, shopping galore, and history at your doorstep. Come for an illustrated preview of the new National Churchill Library and Center to be housed at the university, to hear notable speakers about Churchill and various American presidents, Churchill and wartime military leadership, and an insightful meld we are calling “Aspects of Churchill’s Leadership”—elements of Churchill’s life that underpin his leadership role. Christopher H. Sterling

Registration and Exhibits Room open at Marvin Center, GW campus (all conference sessions for the next two days are here)

SESSION 1: CHURCHILL IN THE 21ST CENTURY

Sir David Cannadine is a British historian with more than a dozen books to his credit, many of them focused on the British Empire and aristocracy, including In Churchill’s Shadow (2003). Richard Toye is a professor of history at the University of Exeter. His books include Lloyd George and Churchill: Rivals for Greatness (2007), Churchill’s Empire: The World that Made Him and the World He Made (2011), and The Roar of the Lion: The Untold Story of Churchill’s Wartime Speeches (2013). Jonathan Rose, is a professor of history at Drew University and author of the forthcoming The Literary Churchill. Luncheon “A Personality Oddly Familiar”: Eleanor Roosevelt’s View of Winston Churchill, Mary Jo Binker is an editor of the Eleanor Roosevelt Papers, a publishing project based at George Washington University.

SESSION 2: CHURCHILL AND THE PRESIDENTS

Moderator: Warren F. Kimball is an emeritus professor of history at Rutgers University and, among other books, edited the landmark three volume Churchill and Roosevelt: The Complete Correspondence (1984). Early Presidents: McKinley to Hoover (to 1933)—Richard Langworth edits Finest Hour and was a co-founder of what is now The Churchill Centre. Franklin D. Roosevelt (1933-45) and Dwight D. Eisenhower (1953-61)—Jean Edward Smith is a historian and biographer with numerous books to his credit, including, most recently, Eisenhower in War and Peace (2012).

Harry S Truman (1945-53)—Elizabeth Edwards Spalding is an assistant professor of government at Claremont-McKenna College in California. She authored The First Cold Warrior: Harry Truman, Containment, and the Remaking of Liberal Internationalism (2006). Reception and Dinner, Park Hyatt Hotel (business attire) A quartet of students, the GWU Singers, will entertain us at this optional dinner with a selection of World War II-era ballads, and Randolph Churchill will share his thoughts on his great-grandfather’s leadership talents.

Moderator: Michael T. Franken, Rear Admiral, U.S. Navy, is the chief of legislative affairs for the Secretary of the Navy. He was the first captain of the USS Winston S. Churchill (DDG 81). Churchill and the Army—Raymond Callahan is an emeritus professor of history at the University of Delaware and has authored five books including Churchill and His Generals (2007) Churchill and Gen. George Marshall—Mark A. Stoler is a professor of history at the University of Vermont where he has taught since 1970. Editor of the Marshall papers, he has written extensively on military leadership, especially during World War II, among which is his Allies in War: Britain and America Against the Axis Powers, 1940-1945 (2005)

Churchill and the Admiralty—Christopher Bell teaches history at Dalhousie University in Halifax, Nova Scotia. His research focus is on 20th century naval history, including Churchill & Sea Power (2013). Churchill and the RAF—Williamson Murray is an American historian, and an emeritus professor of history at Ohio State University. He has authored nearly two-dozen books on military and aviation history Luncheon A Conversation between Paul Reid and Christopher Harmon Paul Reid is a journalist and co-author of the third and final volume of The Last Lion (2013). Dr Christopher Harmon, holds the Matthew C. Horner Chair of Military Theory at Marine Corps University, Quantico, Virginia. An authority on terrorism, he has authored three books.

Moderator: D. Craig Horn is a member of the North Carolina state legislature and a longtime Churchillian and Civil War buff. Churchill’s Heritage—Sir David Cannadine is a British historian with more than a dozen books to his credit, many of them focused on the British Empire and aristocracy. Churchill and Religion—Andrew Roberts is a British journalist and historian who authored, among many other titles, Masters and Commanders: How Roosevelt, Churchill, Marshall and Alanbrooke Won the War in the West (2008).

Churchill’s Health—John Mather is a physician based in Nashville who has long researched the story of Churchill’s health and relationship with his doctor, Lord Moran.

Churchill’s Education—James W. Muller teaches political science at the University of Alaska Anchorage. A long-time Churchill scholar, he has written or edited many books including recent annotated reissues of early books by Churchill (such as Great Contemporaries, 2012). Churchill’s Style—Barry Singer owns Chartwell Booksellers in New York, and authored Churchill Style: The Art of Being Winston Churchill (2012) Gala Closing Dinner, Cannon Caucus Room (black tie or dark suit) Buses will transport everyone to the optional Gala Closing Dinner held in the historic Cannon Caucus Room on Capitol Hill. The Caucus Room was the site of hearings of the House UnAmerican Activities Committee, and is generally regarded as the grandest of rooms built for the House outside the Capitol itself. GWU President Steven Knapp will greet everyone, and a special Keynote speaker will be announced soon.

Washington has so many visitor offerings that it’s hard to know where to begin—think about adding a few days before or after the conference to really see the sites. To assist you, the conference is offering the following special tours: Washington by Night: We’ve all seen pictures, but how many have actually witnessed our beautiful nation‘s capital city at night when memorials, museums and government buildings are all lit up? This motor coach tour will include the White House, the Capitol building, Iwo Jima Memorial, museums along the Mall, etc. Three hours bus tour; departs from Park Hyatt Hotel at 7:00 pm, Thursday; limited to 55 people; price $40 per person. The National Cryptologic Museum: Churchill was fascinated with—and made good use of—intelligence material. This museum, located at Fort Meade, home of the National Security Agency, is located halfway between Baltimore and Washington. In fascinating exhibits, it tells the story of signals intelligence and code breaking from the Revolution to recent times. This is one of the only places in the world you can actually use a German “Enigma” machine from World War II. Buses leave the hotel on Thursday, October 31, at 10:00 am, and return at 3:00 pm; limited to 55 people; price, $90 per person, and includes box lunch.

Tea at the Marshalls: Churchill and U.S. Army Chief of Staff George C. Marshall exchanged countless communications during World War II. Located in Leesburg, Virginia, about 30 miles from the Pentagon and Ft Myer, Dodona Manor was where Marshall worked and stayed during the week. This is the only home the Marshalls owned in their own right, from 1944 until the general’s death in 1959, including his final years in the army, and his later service as Secretary of Defense and Secretary of State. In recent years it has been restored to look as it did when the Marshalls lived there. Buses leave the hotel on Thursday, October 31, at 9:30 am, and return at 3:30 pm; limited to 55 people; price, $70 per person, and includes tea with finger sandwiches, scones & petite fours, and tour/talk at the horne.

Conference Details Conference Site: Other than the dinners, all conference proceedings will be held on the George Washington University campus in the center of Washington, a mere four blocks from the White House, and two from the Department of State. We will meet in the Grand Ballroom of the university’s Marvin Center (corner of 21st and H Streets, NW). Conference registration, exhibits, and luncheons will be held in the Marvin Center as well. There will be a free shuttle bus service between the campus conference site and the conference hotel. Conference Hotel: The Park Hyatt Washington is located in the city’s fashionable West End neighborhood at 24th and M Streets, NW. With shopping in Georgetown, Embassy Row and the business district of K Street all nearby, this distinctive D.C. hotel is anything but ordinary. Designed by the famed Tony Chi, the Park Hyatt Washington offers engaging spaces for working, relaxing, dining, and meeting all in the vibrant heart of our nation’s capital city.

Room rates are $239 for a Premier Park Deluxe (the largest portion of our group block), and $229 for a Park Deluxe King or Twin, plus 14.5% local taxes. Rates are valid 3 days pre and post conference, based on availability. All rooms have complimentary wireless internet. Register online by going to https://resweb.passkey.com/go/gchur or you may call 1-888-421-1442 before October 1, 2013, and refer to the Churchill Centre group rate when making your reservation. Travel: Washington is well served with airports—three of them—and multiple airlines. Closest to the conference site is Reagan National Airport, a mere 20 minute Metro ride from campus. National has direct service to many major cities and airline hubs. Dulles International Airport is in Northern Virginia, about a 45 minute limousine or taxi ride to hotel or campus. And the Thurgood Marshall Baltimore International Airport is a third option (the only one served by Southwest Airlines), with good ground service to downtown Washington about 45 minutes away. Weather and Wardrobe: Fall weather in Washington is second only to the glories of the city in cherry blossom springtime. Long gone are the city’s summer heat and humidity. Count on comfortable days (most likely in the 50s or 60s) and cooler (40s) evenings. Dress for the conference is business or “smart casual.” Dinner on Saturday is black tie or optional dark suit, while Friday dinner is business attire.

Student/Teacher/Academics Program: Teachers at secondary, high school or college level may register for a special price of $100 that includes all sessions and luncheons. We are also making special arrangements to provide complimentary seating during conference sessions for up to 50 students. Interested students should contact the Centre before October 1, 2013 (dmyers@ winstonchurchill.org). In addition, the GWU History Department will invite a select group of honor students to join us for dinner on Friday night. Chartwell and Blenheim Club registrations help us to offer these special benefits for students, teachers and academics. Early Bird Pricing Discounts: Registrations received by July 1, 2013, are eligible for a 10% discount off the basic registration price (member or non-member) or the Chartwell or Blenheim Club package prices. Just note the deduction on the registration form.on the registration form. 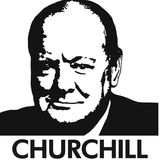