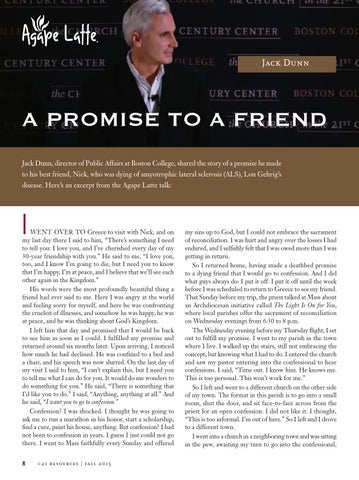 A PROMISE TO A FRIEND Jack Dunn, director of Public Affairs at Boston College, shared the story of a promise he made to his best friend, Nick, who was dying of amyotrophic lateral sclerosis (ALS), Lou Gehrig’s disease. Here’s an excerpt from the Agape Latte talk:

WENT OVER TO Greece to visit with Nick, and on my last day there I said to him, “There’s something I need to tell you: I love you, and I’ve cherished every day of my 30-year friendship with you.” He said to me, “I love you, too, and I know I’m going to die, but I need you to know that I’m happy, I’m at peace, and I believe that we’ll see each other again in the Kingdom.” His words were the most profoundly beautiful thing a friend had ever said to me. Here I was angry at the world and feeling sorry for myself, and here he was confronting the cruelest of illnesses, and somehow he was happy, he was at peace, and he was thinking about God’s Kingdom. I left him that day and promised that I would be back to see him as soon as I could. I fulfilled my promise and returned around six months later. Upon arriving, I noticed how much he had declined. He was confined to a bed and a chair, and his speech was now slurred. On the last day of my visit I said to him, “I can’t explain this, but I need you to tell me what I can do for you. It would do me wonders to do something for you.” He said, “There is something that I’d like you to do.” I said, “Anything, anything at all.” And he said, “I want you to go to confession.” Confession? I was shocked. I thought he was going to ask me to run a marathon in his honor, start a scholarship, find a cure, paint his house, anything. But confession? I had not been to confession in years. I guess I just could not go there. I went to Mass faithfully every Sunday and offered 8

my sins up to God, but I could not embrace the sacrament of reconciliation. I was hurt and angry over the losses I had endured, and I selfishly felt that I was owed more than I was getting in return. So I returned home, having made a deathbed promise to a dying friend that I would go to confession. And I did what guys always do: I put it off. I put it off until the week before I was scheduled to return to Greece to see my friend. That Sunday before my trip, the priest talked at Mass about an Archdiocesan initiative called The Light Is On for You, where local parishes offer the sacrament of reconciliation on Wednesday evenings from 6:30 to 8 p.m. The Wednesday evening before my Thursday flight, I set out to fulfill my promise. I went to my parish in the town where I live. I walked up the stairs, still not embracing the concept, but knowing what I had to do. I entered the church and saw my pastor entering into the confessional to hear confessions. I said, “Time out. I know him. He knows me. This is too personal. This won’t work for me.” So I left and went to a different church on the other side of my town. The format in this parish is to go into a small room, shut the door, and sit face-to-face across from the priest for an open confession. I did not like it. I thought, “This is too informal. I’m out of here.” So I left and I drove to a different town. I went into a church in a neighboring town and was sitting in the pew, awaiting my turn to go into the confessional,

This issue of C21 Resources reflects the continuing power of stories to both nurture and share our faith. In our postmodern world, there may still be nothing more effective for faith formation than to recall and tell our stories of God’s saving work in human history, including our own. 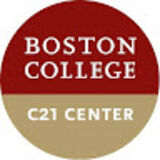 The Church in the 21st Century Center at Boston College