The story of Chuck E. Cheese 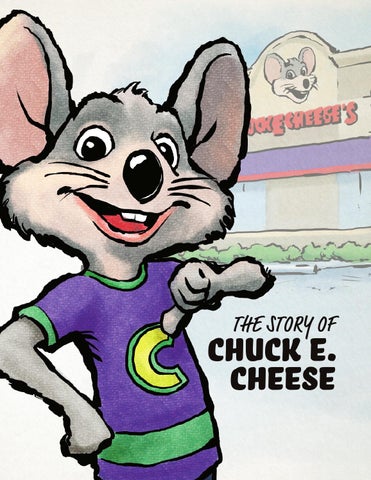 Once upon a time, a little mouse moved into the

St. Marinara’s orphanage. He loved to play games with all the other orphans. But most of all, Chuck E. loved learning to play music.

Because Chuck E. was an orphan, no one knew when his birthday was, so he never had a birthday party of his own. This made Chuck E. sad.

But not for long, because with so

many kids at the orphanage, there was a birthday party almost every week.

Chuck E. loved birthday parties, especially because there was pizza!

That $50 was enough for him to buy a bus ticket to New York City. It was his magic ticket.

When Chuck E. first moved to New York, he was amazed by

how big the city was! But, despite being surrounded by people, Chuck E. felt lonely. He missed the kids from the orphanage. He had no place to stay, so Chuck E. would sleep above the kitchen in a pizzeria run by a friendly Italian chef named

Pasqually. Chuck E. loved the smell of the pizza. Plus he had

plenty of music: Pasqually would listen to, and sing along to, the radio. It was a great place to live.

Until one day... Chuck E., thinking Pasqually had gone home for

the night, explored Pasqually’s restaurant – and was discovered. “Mouse!” screamed Pasqually, as he chased Chuck E. around with a rolling pin. Pasqually had Chuck E. cornered, his knees

knocking from nerves. Chuck E. couldn’t think of what to do, so he did the one thing that always made him happy. He sang.

Pasqually was so shocked he dropped the rolling pin. “A mouse that can sing? My restaurant is saved! I’m a-gonna make you a star!”

Pasqually immediately changed the name of his restaurant to

When the curtain came up, Chuck E. was terrified. Chuck E. had

never sung for so many adults before, and he stood there frozen. He couldn’t do it.

heartbroken. So was Chuck E. He didn’t want to disappoint Pasqually.

As Chuck E. stared out the window, the crowd poured out. He

saw a young boy walking. He was holding his parent’s hands and smiling. But most important, he was wearing a birthday crown.

It was his birthday! Without another thought, Chuck E. began to

No one could believe it. Chuck E. could

sing! The family came in. Pasqually made them pizza. And Chuck E. sang all night.

Other families walking by would join them. It was the best night ever.

From that day on, Chuck E. Cheese’s

would never be a place for grown-ups.

It would be a place where families could

bring their kids, and they could just be… well, kids! Chuck E. Cheese’s would

always be a great place for birthdays, but

more than that, it would be a place where every moment could be as special as a birthday.

were joined on stage by other friends. And Chuck E. even convinced Pasqually to

bring in his other favorite thing – games! And Chuck E. hasn’t stopped singing (or smiling) since.

The story of Chuck E. Cheese