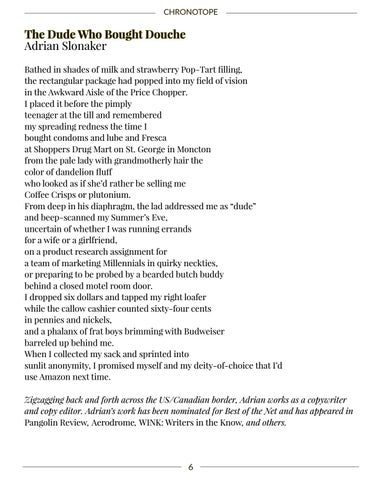 The Dude Who Bought Douche Adrian Slonaker Bathed in shades of milk and strawberry Pop-Tart filling, the rectangular package had popped into my field of vision in the Awkward Aisle of the Price Chopper. I placed it before the pimply teenager at the till and remembered my spreading redness the time I bought condoms and lube and Fresca at Shoppers Drug Mart on St. George in Moncton from the pale lady with grandmotherly hair the color of dandelion fluff who looked as if she’d rather be selling me Coffee Crisps or plutonium. From deep in his diaphragm, the lad addressed me as “dude” and beep-scanned my Summer’s Eve, uncertain of whether I was running errands for a wife or a girlfriend, on a product research assignment for a team of marketing Millennials in quirky neckties, or preparing to be probed by a bearded butch buddy behind a closed motel room door. I dropped six dollars and tapped my right loafer while the callow cashier counted sixty-four cents in pennies and nickels, and a phalanx of frat boys brimming with Budweiser barreled up behind me. When I collected my sack and sprinted into sunlit anonymity, I promised myself and my deity-of-choice that I’d use Amazon next time. Zigzagging back and forth across the US/Canadian border, Adrian works as a copywriter and copy editor. Adrian’s work has been nominated for Best of the Net and has appeared in Pangolin Review, Aerodrome, WINK: Writers in the Know, and others.