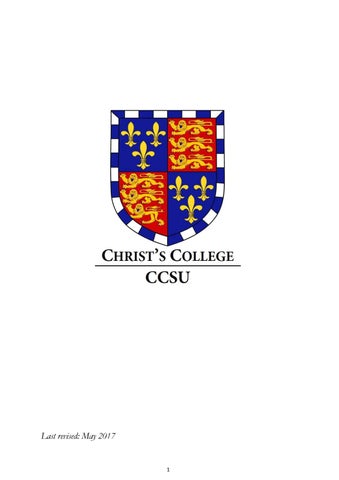 (8) Any graduate or undergraduate member of the College who exercises the right not to be a member of the CCSU shall not be unfairly disadvantaged with regard to the provision of services or otherwise. (9) The object of CCSU shall be to promote the interests of its members as determined by its members, within the bounds permitted by Charity Law. (10) All societies affiliated with either the JCR or MCR shall be automatically affiliated with CCSU, and shall be open to all members of CCSU. (11) A Senior Bursar, who shall be a Fellow of Christâ&#x20AC;&#x2122;s College, will be appointed to advise the CCSU Treasurer. They will be appointed by a simple majority vote of the CCSU Committee. The Senior Bursar will normally be the same Fellow as the Senior Treasurer of the JCR. (12) In the event of any dispute arising as to the interpretation of the provisions of this Constitution, the ruling of the Master of Christ's College shall be final. Section 2. Affiliation to External Organisations (1) The JCR and the MCR shall be permitted to independently affiliate or disaffiliate from external organisations of their choice, through means outlined in their respective constitutions. (2) If the JCR or the MCR decides to become affiliated to any external organisation, it shall publish to all undergraduate and graduate student members of the College, and to the relevant Liaison Committees, a notice of this decision stating the name of the organisation and the details of any subscription or similar fee paid and any donation made or proposed to be made to the organisation. Affiliation shall mean any form of membership of, or formal association with, an organisation the purposes of which are not confined to purposes connected to the College. (3) The JCR and MCR shall publish annually to all undergraduate and graduate members of the College, and to the relevant Liaison 3

Committees, a report stating the names of all the external organisations to which it is affiliated and the details of any subscription or similar fee paid, and of any donation made or proposed to be made, to the organisations in the year covered by the report. Section 3 â&#x20AC;&#x201C; The CCSU Committee (1)

The CCSU Committee shall include the following officers:

(3) If any member of the CCSU Committee is permanently unable to fill their designated role, the MCR and JCR may appoint any other member of their respective committees to fill a total of three representatives for each of the two student bodies. (4) The quorum for the Committee shall be four voting members of the Committee. (5) The CCSU Committee shall be limited in its own authority, its chief purpose being to act as a liaison between the JCR and MCR Committees with regard to matters that concern both bodies, or to discuss broader CCSU issues. (6) In the instance that a consensus cannot be found during a meeting of the committee, then a vote may be called by the Chairperson. In the event that the committee is evenly divided, a forced majority shall be required, such that a motion cannot be carried without a majority of Committee votes. (7) There shall be no sabbatical, or paid, elected office in the CCSU Committee. Section 4 â&#x20AC;&#x201C; CCSU Open Meetings and Referenda (1) The OM shall be the sovereign body of the CCSU, except that it shall be bound by the outcome of referenda, whether enacted previously or subsequently. The decisions of OM are subject to the interpretation of the JCR and MCR independently. (2) Ordinary motions submitted to OM shall be passed by simple majority, and shall be quorate if at least 5% of the CCSU membership is in attendance. Constitutional motions and motions of no confidence against an officer shall be passed by two-thirds majority, and shall be quorate if at least 10% of the JCR and 10% of the MCR are in attendance. It is recommended that these meetings are held immediately after or before JCR OMs.

(3) Referenda shall be called at the discretion of the CCSU Committee, or at the written request of at least 10% of the CCSU membership. In the latter case, a referendum shall take place within ten days of receiving the request, unless there are fewer than ten days of Full Term remaining, in which case the referendum shall be held within ten days of the start of the next Full Term. This is subject to section 4(12). The results of referenda are subject to the interpretation of the JCR and MCR independently. (4) Where an OM or Referendum passes any change to this Constitution, it shall be the duty of the CCSU Committee to submit those changes to the next meeting of GB for ratification. (5) All ordinary and constitutional motions must be submitted to the CCSU Vice President no less than three days before the OM. Motions must be proposed and seconded by members of the CCSU, or by the CCSU Committee collectively. The proposer retains the right to withdraw their motion at any time. (6) Ordinary motions voted on by referendum shall be passed by simple majority, and shall be quorate if at least 20% of the members of the CCSU return ballots. Constitutional motions and motions of no confidence against an officer voted on by referendum shall be quorate if at least 20% of the MCR and 20% of the JCR memberships return ballots, and passed if at least two-thirds of the votes are â&#x20AC;&#x2DC;yesâ&#x20AC;&#x2122; votes. (7) Notice of an OM shall be published at least five days in advance, stating the time and venue of the meeting, and the deadline for motions. Motions must be published no less than two days before the meeting. (8) Emergency Motions must be submitted to the Chair before the beginning of the meeting. The OM shall decide by a two-thirds majority whether it wishes to consider the motion. Emergency Motions may not discuss the amendment of the Constitution or Standing Orders or propose a vote of no confidence. (9) The OM shall be chaired by a member of the CCSU Committee, who in the first instance shall be the President. The Chair shall not vote, except in the case of a tie in which case they have the casting vote. 6

(10) A member of the CCSU Committee, who in the first instance shall be the CCSU Vice-President, shall be appointed to take minutes. These minutes shall be published no less than forty-eight hours before the next meeting for approval by the OM, or within the term. If the minutes are rejected, then they shall be modified according to any recommendations and shall be re-submitted to the next OM. (11) An Emergency OM (EOM) may be called by the CCSU Committee at any time, and must be called within 24 hours of receiving a petition signed by at least 10% of the CCSU membership. An EOM must be publicised immediately, and may only discuss the motion(s) for which it has been called, and may not consider constitutional motions or motions of no confidence. The EOM must take place not less than twenty-four hours, and not more than five days, after notice is given. The quorum for an EOM shall be 10% of the CCSU membership. (12) Special Referenda may be called at any time, on receipt of a petition signed by at least 10% of the CCSU membership, to move the CCSU Presidency from the JCR President, to the MCR President, until the end of the JCR Presidentâ&#x20AC;&#x2122;s term. Quorum shall be 20% of the JCR and 20% of the MCR membership, and the result shall be determined by a two-thirds majority. If this is attained, the Vice-Presidency of CCSU would also change from the JCR Vice-President to the MCR Vice-President. The temporary new composition of CCSU Committee following such a vote shall be: CCSU President, CCSU Vice President, CCSU Treasurer, the JCR President, JCR Vice-President and MCR Externals Officer, subject to section 3(3.)