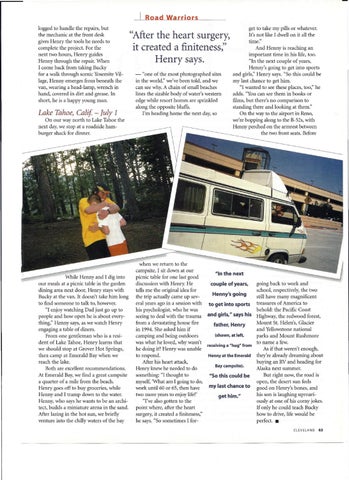 _I logged to handle the repairs, but the mechanic at the front desk gives Henry the tools he needs to complete the project. For the next two hours, Henry guides Henny through the repair. When I come back from taking Bucky for a walk through scenic Yosemite Village, Henny emerges from beneath the van, wearing a head-lamp, wrench in hand, covered in dirt and grease. In short, he is a happy young man.

Lake Tahoe, Calif - July 1 On our way north to Lake Tahoe the next day, we stop at a roadside hamburger shack for dinner.

While Henny and I dig into our meals at a picnic table in the garden dining area next door, Henry stays with Bucky at the van. It doesn&#39;t take him long to find someone to talk to, however. &quot;I enjoy watching Dad just go up to people and how open he is about everything;&#39; Henny says, as we watch Henry engaging a table of diners. From one gentleman who is a resident of Lake Tahoe, Henry learns that we should stop at Grover Hot Springs, then camp at Emerald Bay when we reach the lake. Both are excellent recommendations. At Emerald Bay,we find a great campsite a quarter of a mile from the beach. Henry goes off to buy groceries, while Henny and I tramp down to the water. Henny, who says he wants to be an architect, builds a miniature arena in the sand. After lazing in the hot sun, we briefly venture into the chilly waters of the bay

&quot;After the heart surgery, it created a finiteness;&#39; Henry says. - &quot;one of the most photographed sites in the world;&#39; we&#39;ve been told, and we can see why. A chain of small beaches lines the sizable body of water&#39;s western edge while resort homes are sprinkled along the opposite bluffs. I&#39;m heading home the next day, so

get to take my pills or whatever. It&#39;s not like I dwell on it all the time:&#39; And Henny is reaching an important time in his life, too. &quot;In the next couple of years, Henny&#39;s going to get into sports and girls;&#39; Henry says. &quot;So this could be my last chance to get him. &quot;I wanted to see these places, too;&#39; he adds. &quot;You can see them in books or films, but there&#39;s no comparison to standing there and looking at them.&quot; On the way to the airport in Reno, we&#39;re bopping along to the B-52s, with Henny perched on the armrest between the two front seats. Before

when we return to the campsite, I sit down at our &quot;In the next picnic table for one last good discussion with Henry. He couple of years, tells me the original idea for Henny&#39;s going the trip actually came up several years ago in a session with to get into sports his psychologist, who he was seeing to deal with the trauma and girls,&quot; says his from a devastating house fire father, Henry in 1994. She asked him if (shown, at left, camping and being outdoors was what he loved, why wasn&#39;t receiving a &quot;hug&quot; from he doing it? Henry was unable Henny at the Emerald to respond. After his heart attack, Bay campsite). Henry knew he needed to do something: &quot;I thought to &quot;S0 this could be myself, &#39;What am I going to do, my last chance to work until 60 or 65, then have two more years to enjoy life?&#39; get him:&#39; &quot;I&#39;ve also gotten to the point where, after the heart surgery, it created a finiteness;&#39; he says. &quot;So sometimes I for-

going back to work and school, respectively, the two still have many magnificent treasures of America to behold: the Pacific Coast Highway, the redwood forest, Mount St. Helen&#39;s, Glacier and Yellowstone national parks and Mount Rushmore to name a few. As if that weren&#39;t enough, they&#39;re already dreaming about buying an RV and heading for Alaska next summer. But right now, the road is open, the desert sun feels good on Henry&#39;s bones, and his son is laughing uproariouslyat one of his corny jokes. If only he could teach Bucky how to drive, life would be perfect. _ CLEVELAND

Faced by a fresh awareness of the "finiteness" of life, Henry A. Zimmerman III decided that quality time with his son meant spending seven weeks together on a 9,OOO-mileodyssey around America in a 1982 VW Vanagon. By Christopher Johnston Cleveland Magazine