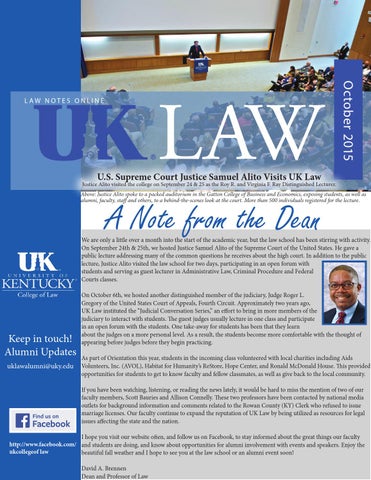 Justice Alito visited the college on September 24 &amp; 25 as the Roy R. and Virginia F. Ray Distinguished Lecturer. Above: Justice Alito spoke to a packed auditorium in the Gatton College of Business and Economics, exposing students, as well as alumni, faculty, staff and others, to a behind-the-scenes look at the court. More than 500 individuals registered for the lecture.

A Note from the Dean

We are only a little over a month into the start of the academic year, but the law school has been stirring with activity. On September 24th &amp; 25th, we hosted Justice Samuel Alito of the Supreme Court of the United States. He gave a public lecture addressing many of the common questions he receives about the high court. In addition to the public lecture, Justice Alito visited the law school for two days, participating in an open forum with students and serving as guest lecturer in Administrative Law, Criminal Procedure and Federal Courts classes.

On October 6th, we hosted another distinguished member of the judiciary, Judge Roger L. Gregory of the United States Court of Appeals, Fourth Circuit. Approximately two years ago, UK Law instituted the “Judicial Conversation Series,” an effort to bring in more members of the judiciary to interact with students. The guest judges usually lecture in one class and participate in an open forum with the students. One take-away for students has been that they learn about the judges on a more personal level. As a result, the students become more comfortable with the thought of appearing before judges before they begin practicing. As part of Orientation this year, students in the incoming class volunteered with local charities including Aids Volunteers, Inc. (AVOL), Habitat for Humanity’s ReStore, Hope Center, and Ronald McDonald House. This provided opportunities for students to get to know faculty and fellow classmates, as well as give back to the local community. If you have been watching, listening, or reading the news lately, it would be hard to miss the mention of two of our faculty members, Scott Bauries and Allison Connelly. These two professors have been contacted by national media outlets for background information and comments related to the Rowan County (KY) Clerk who refused to issue marriage licenses. Our faculty continue to expand the reputation of UK Law by being utilized as resources for legal issues affecting the state and the nation.

I hope you visit our website often, and follow us on Facebook, to stay informed about the great things our faculty http://www.facebook.com/ and students are doing, and know about opportunities for alumni involvement with events and speakers. Enjoy the ukcollegeof law beautiful fall weather and I hope to see you at the law school or an alumni event soon! David A. Brennen Dean and Professor of Law

L AW N OT ES ONLINE FACULT Y NE WS Albertina Antognini (Left) presented her work-inprogress at the Family Law Scholars and Teachers conference, and at the Association of American Law Schools Mid-Year Meeting titled Workshop on Shifting Foundations in Family Law: Family Law’s Response to Changing Familes. Richard Ausness (Right) recently completed an article entitled Planned Parenthood: Adult Adoption and the Right of Adoptees to Inherit. A recently published article, Sherlock Holmes and the Problem of the Dead Hand, was featured in the Private Law Theory blog and was also showcased in the Wills, Trusts &amp; Estates Professor Blog. Scott Bauries (Left) was quoted in hundreds of media outlets in the month of September in regards to the Rowan County Clerk refusing to issue marriage licenses. He also recently published Liability for Negligence Involving Colleges and Students in Contemporary Issues in Higher Education Law (Richard Fossey &amp; Suzanne Eckes, eds., 3d ed. 2015) (with Joseph C. Beckham). Scott presented at the UK CLE inagural Education Law Conference. Jennifer Bird-Pollan (Right) was appointed to a three year position on the peer review board of the Fulbright Program. She was also appointed by President Eli Capilouto to the University Appeals Board. Wirtschaftsuniversitat’s alumni magazine (Vienna, Austria) published an article about Jennifer and the other Fulbright guest professor this summer. Tina Brooks (Left) recently published her book, Sources of American Law: an Introduction to Legal Research, a textbook for 1L legal research courses. Allison Connelly (Right) was interviewed by numerous newspapers, radio and television stations, including USA Today and NPR, about the refusal of the Rowan County Clerk to issue marriage licenses to same-sex couples. Mary Davis (Left) discussed the American Law Institute’s Restatement Third of Torts: Economic Loss project, at the Members Consultative Group meeting at the American Law Institute in Philadelphia.

Josh Douglas (Right) wrote an Issue Brief for the American Constitution Society: To Protect the Right to Vote, Look to State Courts and State Constitutions. He also wrote two encyclopedia entries: Regulation of Federal Elections and Regulation of State Elections for the Encyclopedia of American Governance. Brian Frye (Left) was quoted in a recent Business Lexington article entitled, Lawyers Band Together to Back Kentucky Artists and the Arts. Louise Graham (Right) was interviewed by WKMS for an article entitled, Are Rowan County Marriage Licenses Valid Without Kim Davis’ Name On Them?. Roberta Harding (Left) accepted an invitation to participate in a panel discussion featuring civil liberty supporters in the Lexington area. The panel discussion will be on October 15 at Transylvania University and is sponsored by the ACLU of Kentucky. Panelists will discuss their involvement with civil liberties work, related achievements, and the future of civil liberties in the Lexington community. Kristy Hazelwood (Right) presented A Little Can Go a Long Way: Incorporating Professional Identity and Ethics in an Already Busy First Year Legal Writing Classroom at the Association of Legal Writing Directors Biennial Conference. Nicole Huberfeld (Left) participated as a panelist on a Sirius XM Business Radio show about health care. She was also a guest on The Week in Health Law (TWIHL) podcast twice over the summer, once when King v. Burwell was decided, and once for their “what’s hot in health law/back to school” episode. Nicole was quoted in an American Academy of Family Physicians article about Medicaid. Career Development If you have a present need for a recent graduate or experienced attorney and you would like to post a job on our password protected, online job posting system, please go to our website, select the Careers tab, go to the For Employers area, and then click on “Online Job Posting Service” link. Click on the “Post a Position” button. If you prefer to email a job posting or call us with the information, please contact Joan Yocum at 859-257-8959.

UK Law Out &amp; About

Kathryn Moore (Left) presented on Closing the Retirement Savings Coverage Gap: Are State-Mandated Automatic Enrollment IRAs the Answer? as part of a state and local tax panel at the annual Southeastern Association of Law Schools conference. Melynda Price (Left) recently published a new book, with Oxford University Press, entitled, At the Cross: Race Religion, and Citizenship in the Politics of the Death Penalty. Franklin Runge (Right) was appointed by President Eli Capilouto to the University Appeals Board.

A Trip Down Memory Lane

Eight third year law students were selected as Pupils of the Central Kentucky Inn of Court.

Jennifer L. Brinkley (2005 - Left), was awarded the 2015 Kentucky Outstanding Young Lawyer Award from the Young Lawyers Division of the KBA. Kevin Brown (2001), was appointed interim commissioner of the Kentucky Board of Education.

Mark Bryant (1973 - Right), was re-elected to the Executive Committee of the University of Kentucky Board of Trustees. Ben Crittenden(2002 - Left), joined Morgan &amp; Pottinger, P.S.C. as of counsel. He will support several of the firm’s practice areas including commercial litigation, appellate law, and government and regulatory litigation. P. Branden Gross (2002 - Right), was appointed to serve on the Board of Adjustment by The Lexington Fayette County Board of Assessment Appeals with Mayor Jim Gray’s recoomendation. The Board performs a number of decision-making activities associated with land use and regulations in Lexington and Fayette County, Kentucky. Gross was also appointed to the Fayette County Board of Assessment Appeals.

The following alumni were recognized by Best Lawyers as “Lawyers of the Year.” Only one lawyer per practice area is honored in each community: Atlanta