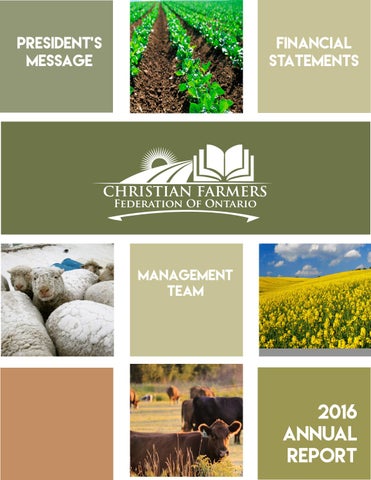 2016 The Christian Farmers Federation of Ontario is a professional organization for families involved in the business of farming. We value family enterprise, profitability and responsible stewardship of resources.

MESSAGE FROM THE PRESIDENT Clarence Nywening is a broiler-breeder operator and cash-cropper from the Thamesville area. Nywening has been serving on the CFFO Executive Board since 2011. He has also served on the Chatham Kent Essex Christian Farmers Association.

Agricultural politics had many ups and downs in

communication between farmers and processors,

welfare and food safety. This initiative has made

came up this past year included Cap and Trade,

significant progress over the past year by opening

dialogue between our two industries. We’ve

Cap and Trade as part of the Climate Change Action

begun to have a better sense of what each

Plan was implemented by the Wynne government in

individual market is looking for, and we hope to

January 2017. It has met with friction in the farming

continue making progress in this area over the

community especially over concerns about the

cost impact on farmers. At CFFO we have actively

Though much was accomplished in 2016, the end

brought these concerns before our government,

of the year brought a lot of uncertainty with major

and repeatedly asked them to be aware of the

implications such a program will have on Ontario

Then President-elect Donald Trump made some

farmers’ ability to compete in a global market.

major claims in regards to trade between our

Other concerns have dealt with matters of farming

two countries, and now as he begins his work as

stewardship, including the ongoing battle over the

president, many of us are still uncertain how his

proper use of pesticides and their effects on pollinator

new policies will affect our farming markets. As

health. As a result of input from the CFFO and other

Canada and the United States currently have

stakeholders, the government has put together the

Phosphorus runoff into Lake Erie continues to be a

We at CFFO are grateful for all the work that

has been actively involved with the 4R Nutrient

was accomplished in the year 2016 and we

Stewardship program and feels that this is an excellent

look forward to continuing to meet each new

challenge that comes with this new year.

of phosphorus runoff without implementing new

government regulations. In September 2015, the Sustainable Farm and Food Initiative was started by the Ontario Farm Environmental Coalition, including CFFO, OFA and Farm and Food Care along with OSCIA and others. This

2016 The Christian Farmers Federation of Ontario is a professional organization for families involved in the business of farming. We value family enterprise, profitability and responsible stewardship of resources.

for strong protection of farmland, especially

on the issue of Soil Health. Policy Tour discussions

within this sensitive and highly populated region.

formed the afternoon portion of many district annual

As Conservation Authorities (CAs) are playing a

meetings and were hosted in all 21 districts, including

two locations in our Northeastern district. There were

our input on the review of the Conservation

Authorities Act focused on the importance of

and Trade offsets; Biodiversity relating to benefits of

diverse farming; Soil Organic Matter relating to use of

and farmers. Proposed changes to Regulation

municipal biosolids as a soil amendment; and Nutrient

440 for the Ontario Processing Vegetable

Loss in Waterways, relating especially to the issue of

bargaining power of the board. CFFO called for

all four topics provided insight and guidance for staff

further consultation with growers on the issue.

Animal welfare issues were raised by the private

Our Young Farmer Barbecues were a great success

Criminal Code regarding treatment of animals.

and Simcoe County districts in July. These events

CFFO wrote to alert MPs of our concerns about

celebrate the importance of our young farmers and

the bill, which was defeated later in the year.

young farm families, and they offer an opportunity for

Many other topics were addressed, including

CFFO staff and leadership to connect directly with

this important demographic within our organization.

Time for fellowship and fun with the kids made for

Framework, and the Red Tape Challenge.

Finally, we said farewell to our Communications

Task Team was a tour in June at the Sheridan Nurseries

Manager, Franchesca Weeks, who had been with

CFFO since 2009. Her creativity and enthusiasm

system and retention pond are exemplary and

for farming were a great asset to CFFO. Many

illustrate the benefits of retention ponds in low water

of you will have met her in person at our Young

Farmer events and Convention, and enjoyed the

presentations from Melisa Luymes from Farm and Food

calendars she designed each year. She is now

Care and Charlie Lalonde and Al Mussell from Agri-

pursuing new opportunities, and we wish her well.

including land use issues such as the Coordinated

Annual Report The Christian Farmers Federation of Ontario is a professional organization for families involved in the business of farming. We value family enterprise, profitability and responsible stewardship of resources.

STATEMENT OF CHANGES IN MEMBERSâ&#x20AC;&#x2122; EQUITY FOR THE YEAR ENDED DECEMBER 31, 2016 Invested in Capital Assets Balance, beginning of year

Seminar fees and other

EXCESS OF REVENUES OVER EXPENSES BEFORE OTHER EXPENSE

Amortization EXCESS OF REVENUES OVER EXPENSES

STATEMENT OF CHANGES IN FINANCIAL POSITION FOR THE YEAR ENDED DECEMBER 31, 2016 CASH PROVIDED (USED) BY:

Cash is comprised of the following: General fund Restricted fund

NOTES TO THE FINANCIAL STATEMENTS FOR THE YEAR ENDED DECEMBER 31, 2016

1. PURPOSE OF THE ORGANIZATION The organization was founded on March 6, 1954, as a federation of local associations of Christian family farmers in Ontario. It was incorporated as a corporation without share capital by letters patent under the Ontario Corporations Act on June 26, 1991. The corporation is a non-profit organization operating to promote and apply Christian ideas and principles to the solution of agricultural problems and to increase the knowledge of members with respect to their responsibilities and opportunities. The corporation is exempt from payment of income taxes as provided under the Income Tax Act.

These financial statements have been prepared in accordance with Canadian accounting standards for not‑for‑profit organizations and include the following significant accounting policies:

(a) Capital Assets Capital assets are recorded at cost. Amortization is provided annually at rates calculated to write-off the assets over their estimated useful lives as follows: Building - 4% straight line

(b) Revenue Recognition The organization follows the deferral method of accounting for contributions and fees. Farm organization funding fees, membership fees, convention fees and sponsor fees are recognized as revenue in the year the corresponding services are provided. Unrestricted contributions and grants are recognized as revenue when received or receivable if the amount to be received can be reasonably estimated and collection is reasonably assured.

(c) Use of Estimates The preparation of financial statements in accordance with generally accepted accounting principles requires management to make estimates and assumptions that affect the reported amounts of assets and liabilities at the date of the financial statements, and the amounts of revenues and expenses during the reporting year. Actual results could differ from management’s best estimates, as additional information becomes available in the future. All estimates are reviewed periodically and adjustments are made to the statement of revenues and expenses in the year they become known. The significant areas requiring management’s use of judgment relate to the rates of amortization used for capital assets and the amounts set up in accrued liabilities.

(d) Contributed Services Because the hours of service by volunteers are not normally purchased by the organization and the difficulty in determining their fair market value, contributed services are not recognized in the financial statements.

NOTES TO THE FINANCIAL STATEMENTS FOR THE YEAR ENDED DECEMBER 31, 2016, CONTINUED

(a) Payments To Union Des Cultivateurs Franco-Ontariens Under an agreement with the Minister of Agriculture, Food and Rural Affairs (OMAFRA), effective January 1, 2008, the organization agrees to pay to Union Des Cultivateurs Franco-Ontariens (UCFO) 1.5% of their net revenue from farm organization funding fees from the prior year. The amount paid in 2016 was $11,800. This agreement shall terminate only if the Agriculture, Food and Rural Affairs Tribunal removes the eligibility of the UCFO for special funding, all parties mutually agree to terminate the agreement, or the UCFO has been granted accreditation by the Tribunal.

NOTES TO THE FINANCIAL STATEMENTS FOR THE YEAR ENDED DECEMBER 31, 2016 CONTINUED 5.

In prior years the organization established a reserve fund for financing future major expenses or possible operating deficits. The reserve amount had been set at 1% of actual farm business registration fees on an annual basis which amounts to $7,806 in the current year (2015 - $7,995). The reserve fund balance on December 31, 2016, is $78,729 (2015 - $70,923). In 2016, the organization established a capital reserve fund for financing future maintenance upgrades on the building. $10,000 was set aside for the reserve fund in 2016. The board elected to spend this amount on capital work done on the building this year.

The following notes (notes 7 to 9) are required by the Farm Registration and Farm Organizations Funding Act, 1993:

NOTES TO THE FINANCIAL STATEMENTS FOR THE YEAR ENDED DECEMBER 31, 2016, CONTINUED 8.

Contributions have been made directly to 21 districts. Section 5(4) of the Farm Registration and Farm Organizations Funding Act, 1993 Ontario Regulation 723/93 requires the following of the qualified districts (local affiliates):

(a) it represents at least 10 farming businesses as described in paragraph 5 of the Act.

(b) persons sitting on its board of directors have been elected, except for persons who were appointed to fill a vacancy or in other exceptional circumstances.

(c) has an annual general meeting.

representatives of local affiliates are invited.

As indicated in the Independent Auditorâ&#x20AC;&#x2122;s Report, these financial statements have been prepared in accordance with Canadian accounting standards for not-for-profit organizations, and the audit was conducted in accordance with Canadian generally accepted auditing standards. These standards are in compliance with the CPA (Chartered Professional Accountants) Canada Handbook.