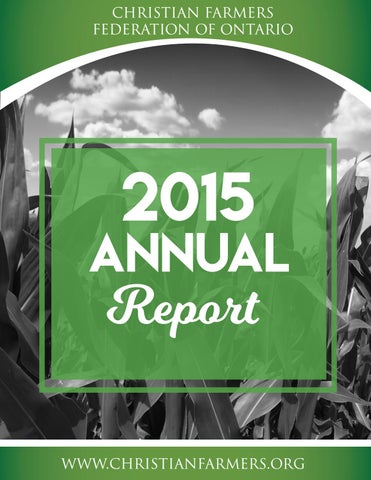 2015 The Christian Farmers Federation of Ontario is a professional organization for families involved in the business of farming. We value family enterprise, profitability and responsible stewardship of resources.

MESSAGE FROM THE PRESIDENT President Lorne Small is a sheep farmer from Kenilworth. He has served on the Ontario Sheep Marketing Agency, worked for several years as a provincial agricultural representative and was the first appointed General Manager of the Ontario Dairy Herd Improvement Corporation when it was privatized. As the fall harvest wrapped up, farmers across the

but from the consumer through the retailing

province concluded 2015 had been a pretty good

industry. Products with a sustainablility claim on

year. There were only a few pockets that experienced

the package sell better than their competitors.

difficult weather challenges. It was a nervous year

For farmers to continue to have viable markets

for the supply management sector. The initial

it will require us to demonstrate proper caring of

indicate that this farm sector took a small loss but it

concern for the environment and awareness of

not as severe as many had expected. The red meat

biodiversity. CFFO is part of an industry wide team

sector enjoyed another profitable year. The fruit and

that is charting the course for Ontario farmers. If

vegetable sector benefited from the decline in the

we do our job well our farmers can become the

government. Both governments are expected to

have a very activist environmental agenda. The

farm community is expecting a focus on urban issues

ground and a find a balanced approach to

which includes the concern for climate change. There

the pesticide and pollinator issue. I give him full

is renewed interest in atmospheric carbon and its

credit for consulting widely and listening to all of

impact on the future world climate.

our ideas and then proposing some concepts to resolve issues. His staff and senior Ministry staff

As farmers we have the opportunity to greatly

have been excellent to work with.

contribute to the carbon capture efforts by returning atmospheric carbon to our soils. By using our

It has been a pleasure to work on behalf of

knowledge and technology to enhance our soils,

our 4,000 members across the province. Our

farmers can both improve the crops we grow and

executive appreciate your continued support and

improve the long term health of our planet. We need

encouragement. This is a wonderful organization

to continuously remind our urban cousins that the farm

and we are making a difference.

community share their concern for the planet and we are part of the solution. â&#x20AC;&#x153;Sustainabilityâ&#x20AC;? is an issue that is coming at agriculture at a very rapid pace. It is coming not from government

2015 The Christian Farmers Federation of Ontario is a professional organization for families involved in the business of farming. We value family enterprise, profitability and responsible stewardship of resources.

endeavours. In the summer, Suzanne Armstrong

to the organization. As part of District AGM meetings

joined our staff team as Director of Research/

Manager of Board and Committee Services. She

Tour, which focused on six key policy topics; land use,

recently completed her PhD thesis on the CFFO,

and is pleased to bring insights from her studies

water stewardship and neonicitinoids. This focused

into her work at the CFFO.

CFFO responded to government consultations on a number of key issues. These included

In the summer of 2015 the CFFO hosted our first

environmental issues such as pollinator health,

Farming Under 40 Barbeques in Oxford, Wentworth-

Brant, and Renfrew-Lanark. These events focused on

and Cap and Trade regulations, Conservation

Authorities Act, stewardship of bobolink and

into the mix. Farmers were entertained by speakers

initiative to get the message out about the good

work that farmers do. The kids had a great time with

the bouncy castle and face painting, and everyone

enjoyed the delicious food and fellowship.

continues to be a concern, and the CFFO argues for the importance of protecting farmland and

Having completed Stage One of the Water

the ability of farmers to engage in normal farming

practices through responses to Minimum Distance

members from various farming and ag-related

and the Aggregate Resources Act. We look

conservation organizations. The focus is on ongoing

forward to continuing to represent the concerns

education of the team members on issues relating to

of our farming families in the year to come.

the best management of water for agriculture longterm. The CFFO also underwent some staffing changes. Jenny Denhartog, our Interim General Manager, retired having served on staff at CFFO since 2006. She previously served on the Executive Board from 1999-2005, including one year as President. She will be greatly missed, and we wish her well in her new

Annual Report The Christian Farmers Federation of Ontario is a professional organization for families involved in the business of farming. We value family enterprise, profitability and responsible stewardship of resources.

IINDEPENDENT AUDITOR’S REPORT To the Directors of Christian Farmers Federation of Ontario (Federation des Agriculteurs Chretiens de l’Ontario) I have audited the accompanying financial statements of Christian Farmers Federation of Ontario, which comprise the balance sheet as of December 31, 2015 and the statements of revenues and expenses, statement of changes in members’ equity and statement of changes in financial position for the year then ended and a summary of significant accounting policies and other explanatory information. Management’s Responsibility for the Financial Statements Management is responsible for the preparation of these financial statements in accordance with Canadian accounting standards for not for profit organizations, and for such internal control as management determines is necessary to enable the preparation of financial statements that are free from material misstatement, whether due to fraud or error. Auditor’s Responsibility My responsibility is to express an opinion on these financial statements based on my audit. I conducted my audit in accordance with Canadian generally accepted auditing standards. Those standards require that I comply with ethical requirements and plan and perform the audit to obtain reasonable assurance about whether the financial statements are free from material misstatement. An audit involves performing procedures to obtain audit evidence about the amounts and disclosures in the financial statements. The procedures selected depend on the auditor’s judgment, including the assessment of the risks of material misstatement of the financial statements, whether due to fraud or error. In making those risk assessments, the auditor considers internal control relevant to the entity’s preparation of the financial statements in order to design audit procedures that are appropriate in the circumstances, but not for the purpose of expressing an opinion on the effectiveness of the entity’s internal control. An audit also includes evaluating the appropriateness of accounting policies used and the reasonableness of accounting estimates made by management, as well as evaluating the presentation of the financial statements. I believe that the audit evidence I have obtained is sufficient and appropriate to provide a basis for my audit opinion. Opinion In my opinion, the financial statements present fairly, in all material respects, the financial position of Christian Farmers Federation of Ontario as at December 31, 2015 and of its financial performance and its changes in financial position for the year then ended in accordance with Canadian accounting standards for not for profit organizations and the CPA (Chartered Professional Accountants) Canada Handbook.

STATEMENT OF CHANGES IN MEMBERSâ&#x20AC;&#x2122; EQUITY FOR THE YEAR ENDED DECEMBER 31, 2015 Invested in Capital Assets Balance, beginning of year

Seminar fees and other

EXCESS OF REVENUES OVER EXPENSES BEFORE OTHER EXPENSE

Amortization EXCESS OF REVENUES OVER EXPENSES

Board and Committee expenses

STATEMENT OF CHANGES IN FINANCIAL POSITION FOR THE YEAR ENDED DECEMBER 31, 2015 CASH PROVIDED (USED) BY:

Cash is comprised of the following: General fund Restricted fund

NOTES TO THE FINANCIAL STATEMENTS FOR THE YEAR ENDED DECEMBER 31, 2015

1. PURPOSE OF THE ORGANIZATION The organization was founded on March 6, 1954 as a federation of local associations of Christian family farmers in Ontario. It was incorporated as a corporation without share capital by letters patent under the Ontario Corporations Act on June 26, 1991. The corporation is a non-profit organization operating to promote and apply Christian ideas and principles to the solution of agricultural problems and to increase the knowledge of members with respect to their responsibilities and opportunities. The corporation is exempt from payment of income taxes as provided under the Income Tax Act.

These financial statements have been prepared in accordance with Canadian accounting standards for not‑for‑profit organizations and include the following significant accounting policies:

(a) Capital Assets Capital assets are recorded at cost. Amortization is provided annually at rates calculated to write-off the assets over their estimated useful lives as follows: Building - 4% straight line

(b) Revenue Recognition The organization follows the deferral method of accounting for contributions and fees. Farm organization funding fees, membership fees, convention fees and sponsor fees are recognized as revenue in the year the corresponding services are provided. Unrestricted contributions and grants are recognized as revenue when received or receivable if the amount to be received can be reasonably estimated and collection is reasonably assured.

(c) Use of Estimates The preparation of financial statements in accordance with generally accepted accounting principles requires management to make estimates and assumptions that affect the reported amounts of assets and liabilities at the date of the financial statements, and the amounts of revenues and expenses during the reporting year. Actual results could differ from management’s best estimates, as additional information becomes available in the future. All estimates are reviewed periodically and adjustments are made to the statement of revenues and expenses in the year they become known. The significant areas requiring management’s use of judgment relate to the rates of amortization used for capital assets and the amounts set up in accrued liabilities.

(d) Contributed Services Because the hours of service by volunteers are not normally purchased by the organization and the difficulty in determining their fair market value, contributed services are not recognized in the financial statements.

NOTES TO THE FINANCIAL STATEMENTS FOR THE YEAR ENDED DECEMBER 31, 2015 CONTINUED

(a) Payments To Union Des Cultivateurs Franco-Ontariens Under an agreement with the Minister of Agriculture, Food and Rural Affairs (OMAFRA), effective January 1, 2008, the organization agrees to pay to Union Des Cultivateurs Franco-Ontariens (UCFO) 1.5% of their net revenue from farm organization funding fees from the prior year. The amount paid in 2015 was $12,094. This agreement shall terminate only if the Agriculture, Food and Rural Affairs Tribunal removes the eligibility of the UCFO for special funding, all parties mutually agree to terminate the agreement, or the UCFO has been granted accreditation by the Tribunal.

NOTES TO THE FINANCIAL STATEMENTS FOR THE YEAR ENDED DECEMBER 31, 2015 CONTINUED 5.

NOTES TO THE FINANCIAL STATEMENTS FOR THE YEAR ENDED DECEMBER 31, 2015 CONTINUED 8.

Contributions have been made to directly to 21 districts. Section 5(4) of the Farm Registration and Farm Organizations Funding Act, 1993 Ontario Regulation 723/93 requires the following of the qualified districts (local affiliates): (a)

has at least ten members, each of whom has paid the membership fee, carrying on farming busi nesses in the area concerned;

has a local affiliate executive elected by the affiliateâ&#x20AC;&#x2122;s members;

has an annual general meeting; and

As indicated in the Independent Auditorâ&#x20AC;&#x2122;s Report, these financial statements have been prepared in accordance Canadian accounting standards for not for profit organizations and the audit was conducted in accordance with Canadian generally accepted auditing standards. These standards are in compliance with the CPA (Chartered Professional Accountants) Canada Handbook.