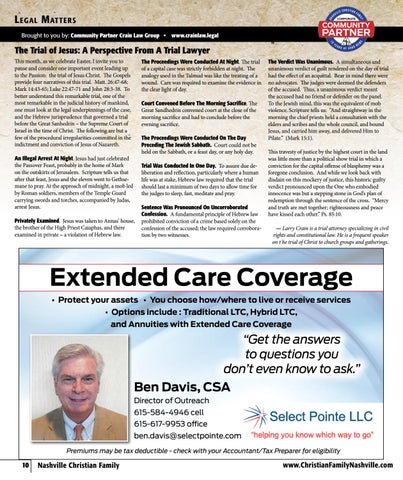 Brought to you by: Community Partner Crain Law Group • www.crainlaw.legal

The Trial of Jesus: A Perspective From A Trial Lawyer This month, as we celebrate Easter, I invite you to pause and consider one important event leading up to the Passion: the trial of Jesus Christ. The Gospels provide four narratives of this trial. Matt. 26:47-68; Mark 14:43-65; Luke 22:47-71 and John 28:3-38. To better understand this remarkable trial, one of the most remarkable in the judicial history of mankind, one must look at the legal underpinnings of the case, and the Hebrew jurisprudence that governed a trial before the Great Sanhedrin – the Supreme Court of Israel in the time of Christ. The following are but a few of the procedural irregularities committed in the indictment and conviction of Jesus of Nazareth.

The Proceedings Were Conducted At Night. The trial of a capital case was strictly forbidden at night. The analogy used in the Talmud was like the treating of a wound. Care was required to examine the evidence in the clear light of day. Court Convened Before The Morning Sacrifice. The Great Sandhedrin convened court at the close of the morning sacrifice and had to conclude before the evening sacrifice. The Proceedings Were Conducted On The Day Preceding The Jewish Sabbath. Court could not be held on the Sabbath, or a feast day, or any holy day.

An Illegal Arrest At Night. Jesus had just celebrated the Passover Feast, probably in the home of Mark on the outskirts of Jerusalem. Scripture tells us that after that feast, Jesus and the eleven went to Gethsemane to pray. At the approach of midnight, a mob led by Roman soldiers, members of the Temple Guard carrying swords and torches, accompanied by Judas, arrest Jesus.

Trial Was Conducted In One Day. To assure due deliberation and reflection, particularly where a human life was at stake, Hebrew law required that the trial should last a minimum of two days to allow time for the judges to sleep, fast, meditate and pray.

Privately Examined. Jesus was taken to Annas’ house, the brother of the High Priest Caiaphas, and there examined in private – a violation of Hebrew law.

Sentence Was Pronounced On Uncorroborated Confession. A fundamental principle of Hebrew law prohibited conviction of a crime based solely on the confession of the accused; the law required corroboration by two witnesses.

The Verdict Was Unanimous. A simultaneous and unanimous verdict of guilt rendered on the day of trial had the effect of an acquittal. Bear in mind there were no advocates. The judges were deemed the defenders of the accused. Thus, a unanimous verdict meant the accused had no friend or defender on the panel. To the Jewish mind, this was the equivalent of mob violence. Scripture tells us: “And straightway in the morning the chief priests held a consultation with the elders and scribes and the whole council, and bound Jesus, and carried him away, and delivered Him to Pilate.” (Mark 15:1). This travesty of justice by the highest court in the land was little more than a political show trial in which a conviction for the capital offense of blasphemy was a foregone conclusion. And while we look back with disdain on this mockery of justice, this historic guilty verdict pronounced upon the One who embodied innocence was but a stepping stone in God’s plan of redemption through the sentence of the cross. “Mercy and truth are met together; righteousness and peace have kissed each other.” Ps. 85:10. — Larry Crain is a trial attorney specializing in civil rights and constitutional law. He is a frequent speaker on t he trial of Christ to church groups and gatherings.

“Get the answers to questions you don’t even know to ask.” Ben Davis, CSA Director of Outreach 615-584-4946 cell 615-617-9953 office ben.davis@selectpointe.com Premiums may be tax deductible - check with your Accountant/Tax Preparer for eligibility 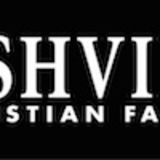