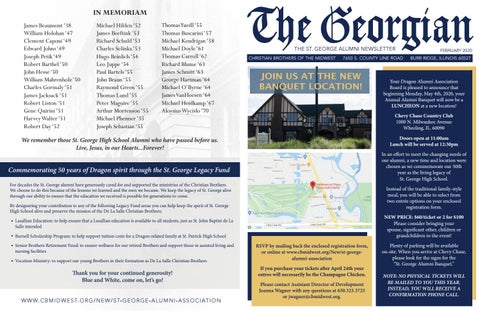 CHRISTIAN BROTHERS OF THE MIDWEST

JOIN US AT THE NEW BANQUET LOCATION!

In an effort to meet the changing needs of our alumni, a new time and location were chosen as we commemorate our 50th year as the living legacy of St. George High School. Instead of the traditional family-style meal, you will be able to select from two entrée options on your enclosed registration form.

For decades the St. George alumni have generously cared for and supported the ministries of the Christian Brothers. We choose to do this because of the lessons we learned and the men we became. We keep the legacy of St. George alive through our ability to ensure that the education we received is possible for generations to come. By designating your contribution to any of the following Legacy Fund areas you can help keep the spirit of St. George High School alive and preserve the mission of the De La Salle Christian Brothers;

NEW PRICE: $60/ticket or 2 for $100 Please consider bringing your spouse, significant other, children or grandchildren to the event!

Your Dragon Alumni Association Board is pleased to announce that beginning Monday, May 4th, 2020, your Annual Alumni Banquet will now be a LUNCHEON at a new location!

Vocation Ministry: to support our young Brothers in their formation as De La Salle Christian Brothers

We remember those St. George High School Alumni who have passed before us. Live, Jesus, in our Hearts...Forever!

Senior Brothers Retirement Fund: to ensure wellness for our retired Brothers and support those in assisted living and nursing facilities

RSVP by mailing back the enclosed registration form, or online at www.cbmidwest.org/New/st-georgealumni-association If you purchase your tickets after April 24th your entree will necessarily be the Champagne Chicken. Please contact Assistant Director of Development Joanna Wagner with any questions at 630.323.3725 or jwagner@cbmidwest.org.

Plenty of parking will be available on-site. When you arrive at Chevy Chase, please look for the signs for the “St. George Alumni Banquet.” NOTE: NO PHYSICAL TICKETS WILL BE MAILED TO YOU THIS YEAR. INSTEAD, YOU WILL RECEIVE A CONFIRMATION PHONE CALL.

...St. George was in the process of being razed. I drove past and was tempted to swipe a few of the bricks lying around. I regret that I didn’t. All good wishes to St. George grads and also to all of the alumni of our great Christian Brothers. - Written by the late Thomas O’Brien, Class of 1931 ...I was on a flight from Washington, D.C., headed back to Denver, Colorado and our plane was in a holding pattern that passed over Evanston. The gentleman sitting next to me was a doctor who practiced at St. Francis Hospital, and he commented as we looked down that it was a shame that they had just closed ‘that wonderful boys’ school.’ It’s a little late now to realize that I have missed much of the fun and brotherhood. I was, and still am, proud to be a Dragon! - Written by Cyril P. “Cy” Athans, Class of 1951

...Brother Albert taught our Senior English class. Brother Albert had a great love for literature, and he was able to convey that to a bunch of initially disinterested seniors so that, by the end of the school year, we were really into literature. We read Shakespeare and thanks to Brother Albert’s informed and enthusiastic explanations of the meaning underlying the words of those classic works and a number of others, we achieved a much greater appreciation for Shakespeare’s genius and for English literature in general. - Written by Dennis LaLiberty, Class of 1955

...that early trip to Eckersall Stadium on Chicago’s far southside to play Mount Carmel. Any trips past 35th Street were quite rare. The Mount Carmel team was loaded,Terry Brennan coached the Caravan, and college scouts were in abundance. We lost that game but continued to win championships in all sports including the Chicago City Basketball Championship, beating a talented DuSable team in 1953. - Written by Dennis O’Malley, Class of 1956

...I was inspired for a lifetime when Brother Michael Ryan -- a multiple sclerosis victim already suffering from very noticeable hand, arm, and upper body twitching -- volunteered to help coach the fledgling wrestling team, frequently kneeling on the mat to demonstrate a specific wrestling hold. With his eternally big smile and good nature always on display, who could not call Brother Mike an inspiration? - Written by Paul Quinn, Class of 1966

...we had the student body and faculty assemblies in the gymnasium. No matter the agenda there was an atmosphere of overwhelming excitement, comradery, and pride in the school that was, I’m sure, unmatched. Of course the highlight of the year was the Student/Faculty Basketball Game, which always had some hilarious or even confrontational situations with both sides. Coach Paul Schmidt was a beast under the boards. - Written by Joe Siprut, Class of 1968

What was your favorite memory of St. George? Share it with the Alumni Office!

St. George stood before us. We entered and molded it; we shaped it. We formed and joined its varied teams and clubs. We taught and advised its eager students. We worked at practice and at home. Our friends came to St. George; We made new ones. We worked with our fellow students. We made its history. What remains now is something intangible. It does not adorn the trophy case or lie in the records. It dwells in all of us who are St. George. It is in our memories, recollections and impressions of our fellow students and teachers. The history of St. George exists as the product of these people. Each one of us has our own special memories of St. George as it really was: Alive with people and teeming with activity. This poem appeared in “The Forty-Two Years” from May, 1969 Author Unknown

Our Legacy Lives on through the involvement of the St. George Alumni...

RAISED TO DATE FOR

1000’S OF ALUMNI COMING TOGETHER 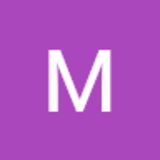