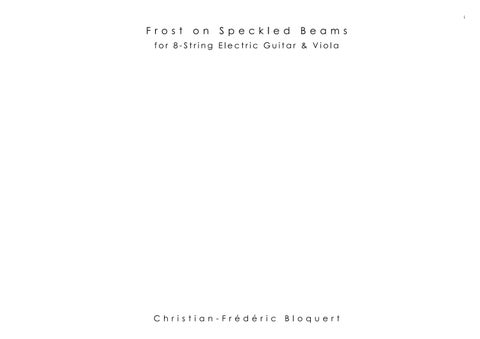 Frost On Speckled Beams The frost on speckled beams Delights the morning, Hurriedly raised into The auburn sky, Hindered only by the first Dappled fret that Slowly gathers undisturbed. It lingers lightly, Ricochetting on the gilded landscape That comes to meet it. Effortless and brilliant, Scintillating and salient, Without prejudice or suspicion It leaps into a kaleidoscope Of its own making. The strokes of its gaze Fire frigid rays of colours That warm the sight. But it is now morning; The frost and the fret Flutter and fleet with the wind They daren’t fight, And the morning Bids farewell to its first light.

PERFORMANCE NOTES The first piece of advice to any performer (especially in regards to the viola part) would be to interpret the rhythms subjectively throughout the piece apart from the sections that are indicated to have a strict pulse (ie m.43-55, 60-90 and 116 until the end). What I mean by that is that in the slow, free sections, the player doesn’t need to play the given rhythms mechanically but rather allow them to approximately show you how the music moves - the same goes for the guitar (or piano) part, of course, although they should always follow the viola. Another advice I would give would be this, regarding tuplets; I conceived them as ‘temporary tempo changes’, that is, I think of them simply as a faster tempo over a certain, if even very brief period. The matter of nested tuplets then, becomes easier to interpret.

For the guitar part; 8 string guitars are not hugely common but they do exist. In the case where one might not be available, a version of this piece also exists with a piano accompaniment or a normal 6-String electric guitar - although these are certainly not as fun to play. It may be possible to play this on a classical guitar although many of the features, such as the harmonics, the tapping (especially that) and access to high notes on guitars that don’t have a cutaway, may not render as well.

If you are playing this with a piano, then everything is relatively straight forward. If you are playing this with either a 6 or 8-string electric guitar then one needs to consider the tone of the instrument. The pickup and tone controls are indicated in the score (take this with a grain of salt of course since every instrument is different). One should aim to have a tone that allows you to switch between a more metallic sound that isn’t too strident and a warm sound that isn’t too bass-y and muddy. In terms of effects, depending on the performance venue, some reverb could be added (and perhaps a touch - and I do mean just a touch - of delay also) but not so much so that it sounds like it exists separately from the viola. The two must sound like they are in the same space and belong together.

Guitar tone control. Warm to the left, bright to the right. Tap - right hand (R.H.) and left hand (L.H.) and indicated in the score. bisbi.

Play as fast as possible. Slap the string with the right thumb (like you would slap on an electric bass).

Circular bowing going from sul pont. to sul tasto. Wide exaggerated vibrato, can be played by slightly blissing in and out of the note for emphasis.

Full score for Frost on Speckled Beams for Viola and 8-String Electric Guitar by Christian-Frédéric Bloquert. 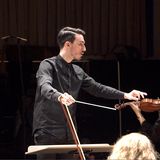