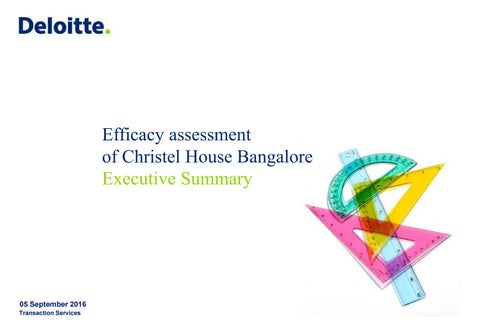 Important Notice This report has been prepared on the basis of the limitations set out in the transmittal letter over the page. This report is intended solely for the information and internal use of Christel House International and its affiliates and is not intended to be and should not be used by any other person or entity. Readers are deemed to have understood and accepted the above notice.

This report consists of our findings & analysis around the following areas of scope: – Profiling the typical student intake for Christel House Bangalore in the context of its

July, 2016, we are pleased to enclose an extract of our

– Assessing infrastructure and facilities offered by Christel House Bangalore and

comparing these with those of government and private institutions

February 2016 (“Engagement Letter”). We have performed an assessment on the efficacy of

Christel House Bangalore as detailed in Appendix 2 of our Engagement Letter.

“You”) and is subject to the restrictions on use specified in the Engagement Letter. No party

terms of academic, nutritional and employment outcomes for the children

any party whatsoever in respect of the contents of this report. The report shall not be

circulated, quoted, disclosed, or distributed to any other party without our prior written consent. Such consent will not be unreasonably withheld.

We draw your attention to the section titled ‘Scope and Bases of Work’ included in Appendix 1, in which we refer to the scope of work, sources of information and the limitations of the work undertaken.

Deloitte refers to one or more of Deloitte Touche Tohmatsu Limited, a UK private company limited by guarantee, and its network of member firms, each of which is a legally separate and independent entity. Please see www.deloitte.com/about for a detailed description of the legal structure of Deloitte Touche Tohmatsu Limited and its member firms Contents | Contents

May 2016. There may have been other developments since then, which could have an impact on the assessment and analyses detailed in this report. However, we take no responsibility for the possible impact of such events and circumstances including updating this report for the same. Our services have been limited in nature, by the time available and the scope of our services. In the circumstances, we may not be aware of all facts or information that you may regard as relevant. Furthermore, we have not corroborated the information received and, to that extent, the information may not be reliable. We accept no responsibility for matters not covered by the report or omitted due to the limited nature of our analysis. Yours faithfully, For, Deloitte Touche Tohmatsu India LLP.

Deloitte refers to one or more of Deloitte Touche Tohmatsu Limited, a UK private company limited by guarantee, and its network of member firms, each of which is a legally separate and independent entity. Please see www.deloitte.com/about for a detailed description of the legal structure of Deloitte Touche Tohmatsu Limited and its member firms Contents | Contents

• Christel House Bangalore (part of Christel House India) is a fully-equipped English medium school which provides free education from kindergarten to grade 12 to children from severely impoverished backgrounds – typically first generation learners • CH Bangalore is one of the very few schools in Karnataka to teach in English right from Kindergarten; Hindi and Kannada also form part of the curriculum • A curriculum based on international educational standards is followed till Grade 8 in order to achieve a standard commensurate to global peers. The Karnataka State Board curriculum is followed for grade 9 and 10 examinations; in addition national standardized tests are also conducted

Pass rate in English in 10th and 12th

• As part of the character development program, cultural activities, life skills trainings and community service programs are held • Two daily nutritious meals with an afternoon snack, an annual health check up and medical services for the students are provided • The school implements a comprehensive career guidance and counselling program • Students are supported post the 12th grade with scholarships for those pursuing further studies, and guidance with job searches for students joining employment Note: (1) For latest available cohort (2) Figure for alumni employed or studying post tertiary studies is for 2011 and 2012 12th grade cohorts Source: Management information Executive summary |

• c.70% students (as of 2013-14) are from a Scheduled Caste/Tribe or Other Backward Class ethnicity • Analysis of the backgrounds and nutrition statistics of students reveal that they come from poor communities, dysfunctional families and disadvantaged social groups, and seem under-nourished compared to global norms • The average daily household income for families of Christel House Bangalore students is c.USD3.5

• In English and Mathematics, CH Bangalore’s performance has seen a growth of 6 and 12 percentage points respectively, from 2010-11 to 2014-15 • With a growth of 17 percentage points over the years, Science is CHI’s best performing subject, with the school reaching the national average in 2014-15 • CH Bangalore has also performed significantly better than Akanksha, a peer education focused NGO – where indexed scores are higher by 17-19 points

Note: (1) Includes data where available for students who leave CH Bangalore after grade 10 but pursue PUC elsewhere, actual retention rate could be higher

• The proportion of PUC graduates getting into a STEM program has increased from c.30% in 2011 to c.38% in 2015 • BSc, BE and BCA seem to be the preferred STEM degrees students have opted for after PUC graduation Executive summary |

CH Bangalore’s infrastructure, facilities and support programs for students and parents compare favorably with those of other NGOs that work in a similar space

In terms of infrastructure such as classrooms, library, playground, dining hall and facilities for music, art and sports CH Bangalore seems to be better than other comparable NGOs

CH Bangalore’s health and nutrition program which offers breakfast, lunch and an afternoon snack daily and full medical care is at par with one NGO but more comprehensive than other peers

CH Bangalore’s college and careers program which provides career guidance, scholarships and assistance with job search appears to be wider in scope and more structured than that of the other NGOs

The parental support and community outreach program of CH Bangalore seems to be at par with the other NGOs, with most holding regular parent-teacher meetings and parent workshops

Key finding Analysis of teacher related statistics of CH Bangalore reveals a better qualified base, with higher attendance records and a lower attrition rate compared to national benchmarks for government and private schools

• Several teachers and students mentioned that CH Bangalore was superior to other government and private schools they had engaged with in all aspects • Employers seemed pleased with the quality of recruits into their programs and commented that CH Bangalore students were at par with their global peers in terms of communication skills and aptitude • “In my previous school the infrastructure was very poor and we ate sitting on the floor. Here we have a proper dining room and other things like a chemistry lab, music room”- Student • “CH Bangalore provides everything for our children-their schooling, meals and medical treatment. Also, we know that our children are well taken care of when they are at school. There is nothing more we could ask for” - Parent • “CH Bangalore hires’ performance is at par with peers from all over the world. The students are confident, clear thinkers with strong communication and IT skills. I would recommend CH Bangalore as a source of talent to others” - Employer

Key finding CH Bangalore’s cost per student appears to be higher than a private school due to a lower studentteacher ratio, however the cost to produce one PUC graduate is far lower than that for government schools

Note: (1) Estimated as total costs divided by number of students who passed in 2014-15 (2) Does not include depreciation, capex, land costs and interest expenses (3) Some of these schools are aided and hence exact costs may vary

This document is confidential and prepared solely for your information. Therefore you should not, without our prior written consent, refer to or use our name or this document for any other purpose, disclose them or refer to them in any prospectus or other document, or make them available or communicate them to any other party. No other party is entitled to rely on our document for any purpose whatsoever and thus we accept no liability to any party who is shown or gains access to this document. Deloitte refers to one or more of Deloitte Touche Tohmatsu Limited, a UK private company limited by guarantee, and its network of member firms, each of which is a legally separate and independent entity. Please see www.deloitte.com/about for a detailed description of the legal structure of Deloitte Touche Tohmatsu Limited and its member firms. ÂŠ 2016 Deloitte Touche Tohmatsu India LLP. All rights reserved. 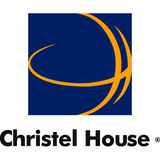