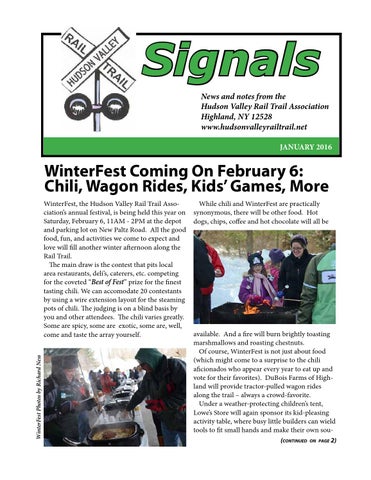 WinterFest, the Hudson Valley Rail Trail Association’s annual festival, is being held this year on Saturday, February 6, 11AM - 2PM at the depot and parking lot on New Paltz Road. All the good food, fun, and activities we come to expect and love will fill another winter afternoon along the Rail Trail. The main draw is the contest that pits local area restaurants, deli’s, caterers, etc. competing for the coveted “Best of Fest” prize for the finest tasting chili. We can accomodate 20 contestants by using a wire extension layout for the steaming pots of chili. The judging is on a blind basis by you and other attendees. The chili varies greatly. Some are spicy, some are exotic, some are, well, come and taste the array yourself.

While chili and WinterFest are practically synonymous, there will be other food. Hot dogs, chips, coffee and hot chocolate will all be

available. And a fire will burn brightly toasting marshmallows and roasting chestnuts. Of course, WinterFest is not just about food (which might come to a surprise to the chili aficionados who appear every year to eat up and vote for their favorites). DuBois Farms of Highland will provide tractor-pulled wagon rides along the trail – always a crowd-favorite. Under a weather-protecting children’s tent, Lowe’s Store will again sponsor its kid-pleasing activity table, where busy little builders can wield tools to fit small hands and make their own sou(continued

venirs of WinterFest. There will be a number of children games as well. Some will be on the trail itself. Others will be alongside the Lowe’s tent. Also, the Hudson Valley Rail Trail Association’s own Caboose Store will sell train-themed toys, books, and other souvenirs. Entrance to WinterFest will be $2, with children 6 years of age and under free. Chili will cost 50 cents per taste or $8 to try them all. ◆

HudsonFest Draws Crowds To Trail Now in its sixth year HudsonFest once again drew crowds on a Columbus Weekend Sunday to the our Rail Trail. Amazing conditions attributed to a record crowd estimated at over 8,000! HudsonFest started as a humble festival in the hamlet of Highland the year that the Walkway over the Hudson opened. When the Hudson Valley Rail Trail expanded to meet Walkway a year later, the event was moved to that end of the trail. Since then HudsonFest has grown not only in terms of visitors but also in the number and variety of vendors. The 2015 HudsonFest attracted over 50 vendors that include local wineries, farms, craftsman, restaurants and community organizations that make up this great region. The event has quickly become the largest fund raiser for our Rail Trail not only from sponsors* and vendor fees but also from the Silent Auction, which brought in several thousand dollars. All of these funds make possible rail trail projects, maintenance and help toward expansion plans. That auction is a bonanza of big ticket items such as premier hotel stays in New York City (the Distrikt Hotel this year) as well as airline tickets 2

to London (Virgin Atlantic) and two first class tickets (Delta) to anywhere in the US. Recently the Silent Auction also has gone high tech. Bids can be made on smart phones via software that alerts participants of jumps in bids, giving them an opportunity to up their own bid. ◆ *The event would not be possible without our very dedicated and special sponsors including Hudson Valley Federal Credit Union, Central Hudson, Waste Management, Pavero Apples, Clear Channel Radio of the Hudson Valley and Inn at Twaalfskill.

Caboose Exhibits Are A Big Success After a half dozen years of sitting unused, our caboose at the Haviland Ave parking lot near Walkway has finally been open to the public. And it is now devoted to a number of exhibits that are reminders that a thriving freight line, crucial to the commerce of this nation, once rolled by to go over what was the only RR bridge crossing the Hudson River for a number of years. Opened up for 12 weekends thru Columbus Day, some 5,000 visitors have passed through. It is fitting to use our caboose as a information center to tell the story of the railroad that once ran on what is now our trail. Cabooses were the control center for freight trains. Their crews had many jobs for the safety, maintenance and operation of the train, more so than the engineer who was the driver and took orders from the conductor. Exhibits detail these duties There is also a pictorial showing the evolution of cabooses from their earliest days as tiny shacks on flatbed cars. Our caboose has several fixtures still intact. There are lockers that held signal and repair equipment and were used to sleep on in layovers or stops. One fixture has proven popular, the cupola area which sits high up for a commanding view of freight cars and engine ahead. It is easy for adults and kids alike to scamper up to that perch. Thousands have and it is probably the most photographed spot to catch the many smiles being up there invariably bring. Few

people have ever been in a caboose and it is now one of the highlights of a visit to the nearby Walkway. The main exhibit is in one end of the caboose. It is of a 1943 derailment and fire that halted movement for 24 hours of troops and war materiel. Dramatic photos show the wreckage, including of homes burnt out nearby by the flaming spill of oil and precious aviation gas. Story boards give newspaper accounts and point to the cause of the derailment that for a time was thought to be Nazi saboteurs. Other exhibits talk about the freight line with a map and text about the freight that moved along what is now the rail trail. A poster that kids like are the various lantern signals used by caboose crews to communicate with the engineer for train movements. Lastly, one of the purposes of opening up the caboose is to let people know about our rail trail. Several posters show its use in all seasons, its RR relics and natural setting. â&#x2014;&#x2020;

Rail Trail To Extend 1.95 Miles By 2017 The Hudson Valley Rail Trail is finally on the way to stretching a further 1.95 miles westward to a terminus on Rt. 299 and South Street, just across from Loweâ&#x20AC;&#x2122;s. This expansion, in two separate phases, will bring our trail to a total 5.6 miles and be completed in late 2017. The process to get to this point of certainty has been a long and arduous one. It dates back a half dozen years with a planned single phase for the entire expansion. Costs and funding were such that we decided to just complete a part, which is now Phase 3 from Tony Williams Park to across from Highland Firehouse 2 on New Paltz Road. A Phase 4 to South Street would have to come later.

Even just limiting ourselves to Phase 3, finding our 20% funding match to the 80% federal monies of the 1.9 million project was difficult. Ray Costantino, project manager and former president of the Hudson Valley Rail Trail Association, constantly struggled. It was only in the last 18 months that the funding package was pulled together to get go ahead approval from the federal government. Helping us reach our $380K match were: Scenic Hudson ($100K) and NYS Assemblyman Frank Skartados ($50K). Throughout this period, Phase 3 got held up with

If you have been on our Rail Trail in the vicinity of Walkway you would have discovered a new billboard that is part of an effort to aim visitors to our trail and town. The billboard has an attractive background image. It contains a concise set of trail rules as well as how to arrange permission for special uses and events on the trail. The board will also have posters announcing trail and town events. At some point a wayfinding board will be added that mimics the existing one that features Poughkeepsie. Ours will have Highland as the center of its universe. In the works for 2016 is an arch across the trail just to the east of the caboose. It will look like girder signal structures you see on Metro North. The arch will welcome visitors to our trail, which actually begins at the portasans. The caboose is a more attractive setting.

federal requirements. For example, one delay was to assure that no native American sites would be impacted by building a rail trail, which was cleared by showing it was following a 120 year old rail line. All approvals finally came in late 2015. We are now clear to start and complete construction this year.

To the rescue for Phase 4 came Ulster County, which under the direction of Executive Mike Hein has been keen on building linkages of trails throughout the county. Specifically, the county goal is to help extend our trail to meet with the Wallkill Valley Rail Trail in New Paltz, which now goes into Kingston; from there make trail connections into the Catskills. The $2 million Phase 4 project has been put on a fast track. In Fall 2015 the county legislature approved funding the 20% match to the federal 80%. The Phase 4 schedule is: Project design (Fall 2015-Summer 2016); property acquisition (Spring/ Summer 2016); construction approval (Fall 2016); and construction in 2017. â&#x2014;&#x2020; 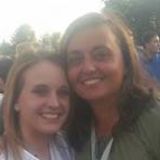 News and information from the Hudson Valley Rail Trail

News and information from the Hudson Valley Rail Trail