The Grit in the Oyster: re-visiting the Creative Industries debate 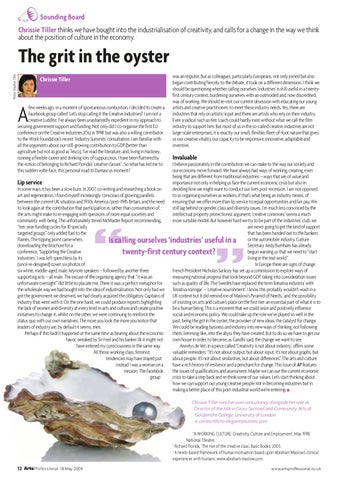 Sounding Board Chrissie Tiller thinks we have bought into the industrialisation of creativity, and calls for a change in the way we think about the position of culture in the economy.

The grit in the oyster Chrissie Tiller

few weeks ago, in a moment of spontaneous combustion, I decided to create a Facebook group called ‘Let’s stop calling it the Creative Industries!’ I am not a creative Luddite. I’ve always been unashamedly expedient in my approach to securing government support and funding. Not only did I co-organise the first EU conference on the Creative Industries (CIs) in 19981 but was also a willing contributor to the Work Foundation’s recent ‘Industry Summits’ consultation. I am familiar with all the arguments about our still-growing contribution to GDP (better than agriculture but not as good as Tesco). I’ve read the literature, and, living in Hackney, running a flexible career and drinking lots of cappuccinos, I have been flattered by the notion of belonging to Richard Florida’s ‘creative classes’2. So what has led me to this sudden volte-face, this personal road to Damascus moment?

Lip service In some ways it has been a slow burn. In 2007, co-writing and researching a book on art and regeneration, I found myself increasingly conscious of growing parallels between the current UK situation and 1930s America/post-1945 Britain, and the need to look again at the contribution that participation in, rather than consumption of, the arts might make to re-engaging with questions of more equal societies and community well-being. The unfortunately timed McMaster Report recommending, “ten-year-funding cycles for 10 specially targeted groups” only added fuel to the flames. The tipping point came when, downloading the brochure for a conference, ‘Supporting the Creative Industries’, I was left speechless by its (since re-designed) cover: six photos of six white, middle-aged, male, keynote speakers – followed by another three supporting acts – all male. The excuse of the organising agency that “it was an unfortunate oversight” did little to placate me. There it was: a perfect metaphor for the wholesale way we had bought into the idea of industrialisation. Not only had we got the government we deserved, we had clearly acquired the obligatory Captains of Industry that went with it. On the one hand, we could produce reports highlighting the lack of women and diversity at every level in arts and culture and create positive initiatives to change it, whilst on the other, we were continuing to reinforce the status quo with our own narratives. The more you look the more you notice that leaders of industry are, by default it seems, men. Perhaps if this hadn’t happened at the same time as hearing about the economic havoc wreaked by Sir Fred and his banker ilk it might not have entered my consciousness in the same way. All those working-class, feminist tendencies may have stayed put: instead I was a woman on a mission. The Facebook group

was an impulse. But as colleagues, particularly Europeans, not only joined but also began contributing fiercely to the debate, it took on a different dimension. I think we should be questioning whether calling ourselves ‘industries’ is still useful in a twentyfirst century context, burdening ourselves with an outmoded and, now discredited, way of working. We should re-visit our current obsession with educating our young artists and creative practitioners to meet these industry needs. Yes, there are industries that rely on artistic input and there are artists who rely on their industry. Even a radical such as Ken Loach could hardly exist without what we call the film industry to support him. But most of us in the so-called creative industries are not large-scale enterprises; it is exactly our small, flexible, fleet-of-foot nature that gives us our creative vitality, our capacity to be responsive, innovative, adaptable and inventive.

Invaluable I believe passionately in the contribution we can make to the way our society and our economy move forward. We have always had ways of working, creating, even being that are different from traditional industries – ways that are of value and importance not only in helping us face the current economic crisis but also in deciding how we might want to conduct our lives post-recession. I am not opposed to us organising ourselves as workers, if that’s what being an industry means, of ensuring that we offer more than lip service to equal opportunities and fair pay. We still lag behind on gender, class and diversity issues. I’m much less convinced by the intellectual property protectionist argument; ‘creative commons’ seems a much more suitable model. But however hard we try to be part of the industries’ club, we are never going to get the kind of support that has been handed out to the bankers or the automobile industry. Culture Secretary Andy Burnham has already begun warning us that we need to “start living in the real world”. In Europe there are signs of change. French President Nicholas Sarkozy has set up a commission to explore ways of measuring national progress that look beyond GDP, taking into consideration issues such as quality of life. The Swedes have replaced the term ‘kreativa industria’ with ‘kreativa näringar’ – ‘creative nourishment’. I know this probably wouldn’t wash in a UK context but it did remind me of Maslow’s Pyramid of Needs,3 and the possibility of insisting on arts and culture’s place on the first tier: an essential part of what it is to be a human being. This is a moment that we could seize and positively influence social and economic policy. We could take up the role we’ve played so well in the past, being the grit in the oyster, the provoker of new ideas, the catalyst for change. We could be leading business and industry into new ways of thinking, not following them, lemming-like, into the abyss they have created. But to do so we have to get our own house in order, to become, as Gandhi said, the change we want to see. Annelys de Vet, in a piece called ‘Creativity is not about industry’, offers some valuable reminders: “It’s not about output, but about input. It’s not about graphs, but about people. It’s not about similarities, but about differences”. The arts and culture have a rich history of resilience and a penchant for change. This issue of AP features the issues of qualifications and assessment. Maybe we can use the current economic crisis to take a step back and re-think some of our values. Let’s start thinking about how we can support our young creative people not in becoming industries but in making a better place of this post-industrial world we’re entering. ■

Is calling ourselves ‘industries’ useful in a twenty-first century context?

Chrissie Tiller runs her own consultancy alongside her role as Director of the MA in Cross-Sectoral and Community Arts at Goldsmiths College, University of London. e: contact@cta-elegantsolutions.com 1 ‘A WORKING CULTURE: Creativity, Culture and Employment’, May 1998, National Theatre. 2 Richard Florida, ‘The rise of the creative class’, Basic Books, 2003. 3 A needs-based framework of human motivation based upon Abraham Maslow’s clinical experiences with humans. www.abraham-maslow.com

The Grit in the Oyster: re-visiting the Creative Industries debate

This article first appeared in Arts Professional Issue 194 http://www.artsprofessional.co.uk Chrissie Tiller thinks we have bought into the industrialisation of creativity and calls for a change in th way we think about culture in the economy 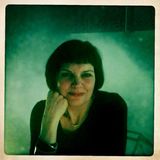