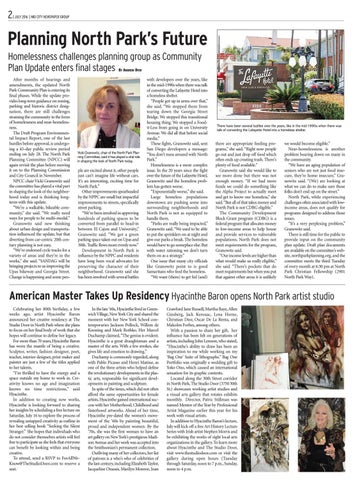 After months of hearings and amendments, the updated North Park Community Plan is entering its final phases. While the update provides long-term guidance on zoning, parking and historic district designation, there are still challenges straining the community in the form of homelessness and near-homelessness. The Draft Program Environmental Impact Report, one of the last hurdles before approval, is undergoing a 45-day public review period ending on July 28. The North Park Planning Committee (NPCC) will again revisit the plan before moving it on to the Planning Commission and City Council in November. NPCC chair Vicki Granowitz said the committee has played a vital part in shaping the look of the neighborhood today and is thinking longterm with this update. “We’re a walkable, bikeable community,” she said. “We really need ways for people to be multi-modal.” Granowitz said new thinking about urban design and transportation influenced the update, but that diverting from car-centric 20th century planning is not easy. “We’ve endorsed cycle tracks for a variety of areas and they’re in the works,” she said. “SANDAG will be bringing projects to us improving the Upas bikeway and Georgia Street. Change is happening and some peo-

Vicki Granowitz, chair of the North Park Planning Committee, said it has played a vital role in shaping the look of North Park today.

ple are excited about it, other people just can’t imagine life without cars. It’s an interesting, exciting time for North Park.” Other improvements spearheaded by the NPPC are small but impactful improvements to streets, specifically street parking. “We’ve been involved in approving hundreds of parking spaces to be converted from parallel to head-in between El Cajon and University,” Granowitz said. “We got a green parking space taken out on Upas and 30th. Traffic flows more evenly now.” Development in North Park is influence by the NPPC and residents have long been vocal advocates for preserving the character of their neighborhood. Granowitz said she has been involved with several battles

with developers over the years, like in the mid-1990s when there was talk of converting the Lafayette Hotel into a homeless shelter. “People got up in arms over that,” she said. “We stopped them from tearing down the Georgia Street Bridge. We stopped this transitional housing thing. We stopped a Food4-Less from going in on University Avenue. We did all that before social media.” These fights, Granowitz said, sent San Diego developers a message: “You don’t mess around with North Park.” Homelessness is a more complex issue. In the 20 years since the fight over the future of the Lafayette Hotel, Granowitz said the homeless problem has gotten worse. “Exponentially worse,” she said. Large homeless populations downtown are pushing some into surrounding neighborhoods and North Park is not as equipped to handle them. “Parks are really being impacted,” Granowitz said. “We used to be able to put the sprinklers on at night and give our parks a break. The homeless would have to go someplace else. But with water rationing we don’t turn them on as a strategy.” One issue that many city officials like Granowitz point to is good Samaritans who feed the homeless. “We want (them) to get fed (and)

There have been several battles over the years, like in the mid-1990s when there was talk of converting the Lafayette Hotel into a homeless shelter.

there are appropriate feeding programs,” she said. “Right now people go out and just drop off food which often ends up creating trash. There’s plenty of food available.” Granowitz said she would like to see more done but there was not enough money. “If we had more funds we could do something like the Alpha Project to actually meet and get to know our homeless,” she said. “But all of that takes money and North Park is not CDBG eligible.” The Community Development Block Grant program (CDBG) is a federal program that allocates money to low-income areas to help house and provide services to vulnerable populations. North Park does not meet requirements for the program, Granowitz said. “Our income levels are higher than what would make us really eligible,” she said. “There’s pockets that do meet requirements but when you put that against other areas it is unlikely

we would become eligible.” Near-homelessness is another problem bearing down on many in the community. “We have an aging population of seniors who are not just food insecure, they’re home insecure,” Granowitz said. “(We) are looking at what we can do to make sure those folks don’t end up on the street.” North Park, while experiencing challenges often associated with lowincome areas, does not qualify for programs designed to address those issues. “It’s a very perplexing problem,” Granowitz said. There is still time for the public to provide input on the community plan update. Draft plan documents are available on the committee’s website, northparkplanning.org, and the committee meets the third Tuesday of every month at 6:30 pm at North Park Christian Fellowship (2901 North Park Way).

American Master Takes Up Residency Hyacinthe Baron opens North Park artist studio Celebrating her 80th birthday, a few weeks ago, artist Hyacinthe Baron announced her creative residency at The Studio Door in North Park where she plans to focus on her final body of work that she hopes will continue to define her legacy. For more than 70 years, Hyacinthe Baron has worn the mantle of being a creative. Sculptor, writer, fashion designer, poet, teacher, interior designer, print maker and painter are just a few of the titles applied to her talents. “I’m thrilled to have the energy and a space outside my home to work in. Creativity knows no age and imagination knows no time restrictions,” said Hyacinthe. In addition to creating new works, Hyacinthe is looking forward to sharing her insights by scheduling a free lecture on Saturday, July 16 to explore the process of revealing untapped creativity as outline in her best selling book “Seeking the Silent Stranger.” She hopes that individuals who do not consider themselves artists will feel free to participate as she feels that everyone can benefit by looking within and being creative. To attend, send a RSVP to ForAllWeKnow@TheStudioDoor.com to reserve a seat.

In the late ’60s, Hyacinthe lived in Greenwich Village, New York City and shared the moment with her New York School contemporaries Jackson Pollock, Willem de Kooning and Mark Rothko. Her Marcel Duchamp claimed, “The genius is evident. Hyacinthe is a great draughtsman and a master of the arts. With a few strokes, she gives life and emotion to drawing.” Duchamp is commonly regarded, along with Pablo Picasso and Henri Matisse, as one of the three artists who helped define the revolutionary developments in the plastic arts, responsible for significant developments in painting and sculpture. In spite of the times, which did not often afford the same opportunities for female artists, Hyacinthe gained international success with her Motherhood, Childhood and Sisterhood artworks. Ahead of her time, Hyacinthe pre-dated the women’s movement of the ’60s by painting beautiful, proud and independent women. By the ’70s, she was the first woman to have an art gallery on New York’s prestigious Madison Avenue and her work was accepted into the Smithsonian’s permanent collection. Outliving many of her collectors, her list of patrons is a who’s who of celebrities of the last century, including Elizabeth Taylor, Jacqueline Onassis, Marilyn Monroe, Joan

Crawford Jane Russell, Martha Raye, Allen Ginsberg, Jack Kerouac, Lena Horne, Christian Dior, Oscar De La Renta, and Malcolm Forbes, among others. With a passion to share her gift, her influence has been felt on generations of artists, including John Lennon, who stated, “Hyacinthe’s ability to draw has been an inspiration to me while working on my ‘Bag One’ Suite of lithographs.” Bag One Portfolio was originally a wedding gift to Yoko Ono, which caused an international sensation for its graphic contents. Located along the 30th Street corridor in North Park, The Studio Door (3750 30th St.) showcases working artist studios and a visual arts gallery that rotates exhibits monthly. Director, Patric Stillman was named Mentor of the Year by Professional Artist Magazine earlier this year for his work with visual artists. In addition to Hyacinthe Baron’s lecture, July will kick off a free Art History Lecture Series with Irish artist Stephen Morris and be exhibiting the works of eight local arts organizations in the gallery. To learn more about Hyacinthe and The Studio Door, visit www.thestudiodoor.com or visit the gallery during open hours (Tuesday through Saturday, noon to 7 p.m., Sunday, noon to 4 p.m.