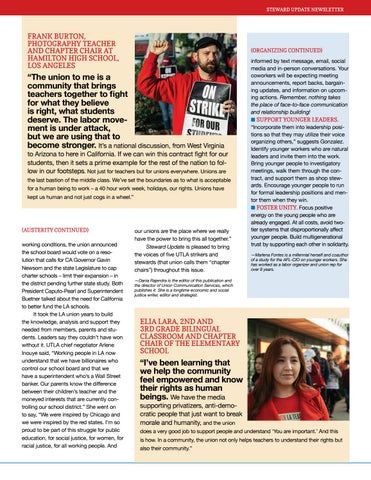 “The union to me is a community that brings teachers together to fight for what they believe is right, what students deserve. The labor movement is under attack, but we are using that to become stronger. It’s a national discussion, from West Virginia to Arizona to here in California. If we can win this contract fight for our students, then it sets a prime example for the rest of the nation to follow in our footsteps. Not just for teachers but for unions everywhere. Unions are the last bastion of the middle class. We’ve set the boundaries as to what is acceptable for a human being to work – a 40 hour work week, holidays, our rights. Unions have kept us human and not just cogs in a wheel.”

(AUSTERITY CONTINUED) working conditions, the union announced the school board would vote on a resolution that calls for CA Governor Gavin Newsom and the state Legislature to cap charter schools – limit their expansion – in the district pending further state study. Both President Caputo-Pearl and Superintendent Buetner talked about the need for California to better fund the LA schools. It took the LA union years to build the knowledge, analysis and support they needed from members, parents and students. Leaders say they couldn’t have won without it. UTLA chief negotiator Arlene Inouye said, “Working people in LA now understand that we have billionaires who control our school board and that we have a superintendent who’s a Wall Street banker. Our parents know the difference between their children’s teacher and the moneyed interests that are currently controlling our school district.” She went on to say, “We were inspired by Chicago and we were inspired by the red states. I’m so proud to be part of this struggle for public education, for social justice, for women, for racial justice, for all working people. And

our unions are the place where we really have the power to bring this all together.” Steward Update is pleased to bring the voices of five UTLA strikers and stewards (that union calls them “chapter chairs”) throughout this issue.

informed by text message, email, social media and in-person conversations. Your coworkers will be expecting meeting announcements, report backs, bargaining updates, and information on upcoming actions. Remember, nothing takes the place of face-to-face communication and relationship building! ■■SUPPORT YOUNGER LEADERS. “Incorporate them into leadership positions so that they may utilize their voice organizing others,” suggests Gonzalez. Identify younger workers who are natural leaders and invite them into the work. Bring younger people to investigatory meetings, walk them through the contract, and support them as shop stewards. Encourage younger people to run for formal leadership positions and mentor them when they win. ■■FOSTER UNITY. Focus positive energy on the young people who are already engaged. At all costs, avoid twotier systems that disproportionally affect younger people. Build multigenerational trust by supporting each other in solidarity. —Marlena Fontes is a millennial herself and coauthor of a study for the AFL-CIO on younger workers. She has worked as a labor organizer and union rep for over 9 years.

—Dania Rajendra is the editor of this publication and the director of Union Communication Services, which publishes it. She is a longtime economic and social justice writer, editor and strategist.

“I’ve been learning that we help the community feel empowered and know their rights as human beings. We have the media supporting privatizers, anti-democratic people that just want to break morale and humanity, and the union does a very good job to support people and understand ‘You are important.’ And this is how. In a community, the union not only helps teachers to understand their rights but also their community.”