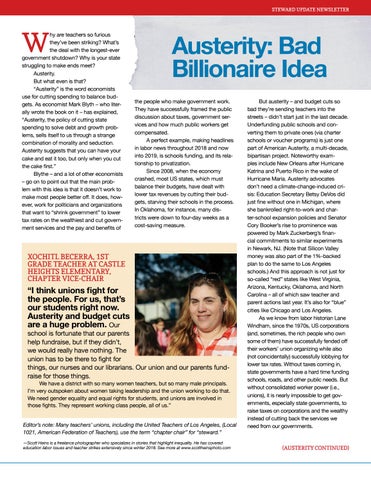 hy are teachers so furious they’ve been striking? What’s the deal with the longest-ever government shutdown? Why is your state struggling to make ends meet? Austerity. But what even is that? “Austerity” is the word economists use for cutting spending to balance budgets. As economist Mark Blyth – who literally wrote the book on it – has explained, “Austerity, the policy of cutting state spending to solve debt and growth problems, sells itself to us through a strange combination of morality and seduction. Austerity suggests that you can have your cake and eat it too, but only when you cut the cake first.” Blythe – and a lot of other economists – go on to point out that the main problem with this idea is that it doesn’t work to make most people better off. It does, however, work for politicians and organizations that want to “shrink government” to lower tax rates on the wealthiest and cut government services and the pay and benefits of

Austerity: Bad Billionaire Idea the people who make government work. They have successfully framed the public discussion about taxes, government services and how much public workers get compensated. A perfect example, making headlines in labor news throughout 2018 and now into 2019, is schools funding, and its relationship to privatization. Since 2008, when the economy crashed, most US states, which must balance their budgets, have dealt with lower tax revenues by cutting their budgets, starving their schools in the process. In Oklahoma, for instance, many districts were down to four-day weeks as a cost-saving measure.

“I think unions fight for the people. For us, that’s our students right now. Austerity and budget cuts are a huge problem. Our school is fortunate that our parents help fundraise, but if they didn’t, we would really have nothing. The union has to be there to fight for things, our nurses and our librarians. Our union and our parents fundraise for those things. We have a district with so many women teachers, but so many male principals. I’m very outspoken about women taking leadership and the union working to do that. We need gender equality and equal rights for students, and unions are involved in those fights. They represent working class people, all of us.” Editor’s note: Many teachers’ unions, including the United Teachers of Los Angeles, (Local 1021, American Federation of Teachers), use the term “chapter chair” for “steward.” —Scott Heins is a freelance photographer who specializes in stories that highlight inequality. He has covered education labor issues and teacher strikes extensively since winter 2018. See more at www.scottheinsphoto.com

But austerity – and budget cuts so bad they’re sending teachers into the streets – didn’t start just in the last decade. Underfunding public schools and converting them to private ones (via charter schools or voucher programs) is just one part of American Austerity, a multi-decade, bipartisan project. Noteworthy examples include New Orleans after Hurricane Katrina and Puerto Rico in the wake of Hurricane Maria. Austerity advocates don’t need a climate-change-induced crisis: Education Secretary Betsy DeVos did just fine without one in Michigan, where she bankrolled right-to-work and charter-school expansion policies and Senator Cory Booker’s rise to prominence was powered by Mark Zuckerberg’s financial commitments to similar experiments in Newark, NJ. (Note that Silicon Valley money was also part of the 1%-backed plan to do the same to Los Angeles schools.) And this approach is not just for so-called “red” states like West Virginia, Arizona, Kentucky, Oklahoma, and North Carolina – all of which saw teacher and parent actions last year. It’s also for “blue” cities like Chicago and Los Angeles. As we know from labor historian Lane Windham, since the 1970s, US corporations (and, sometimes, the rich people who own some of them) have successfully fended off their workers’ union organizing while also (not coincidentally) successfully lobbying for lower tax rates. Without taxes coming in, state governments have a hard time funding schools, roads, and other public needs. But without consolidated worker power (i.e., unions), it is nearly impossible to get governments, especially state governments, to raise taxes on corporations and the wealthy instead of cutting back the services we need from our governments.