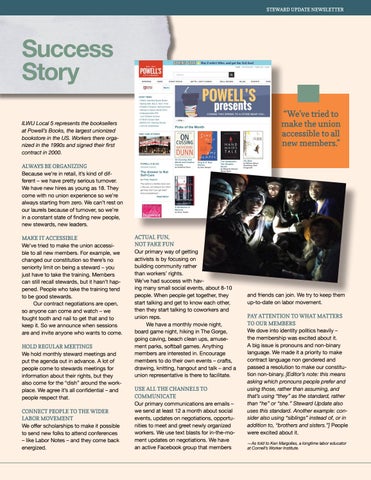 Success Story “We’ve tried to make the union accessible to all new members.”

ILWU Local 5 represents the booksellers at Powell’s Books, the largest unionized bookstore in the US. Workers there organized in the 1990s and signed their first contract in 2000. ALWAYS BE ORGANIZING Because we’re in retail, it’s kind of different – we have pretty serious turnover. We have new hires as young as 18. They come with no union experience so we’re always starting from zero. We can’t rest on our laurels because of turnover, so we’re in a constant state of finding new people, new stewards, new leaders. MAKE IT ACCESSIBLE We’ve tried to make the union accessible to all new members. For example, we changed our constitution so there’s no seniority limit on being a steward – you just have to take the training. Members can still recall stewards, but it hasn’t happened. People who take the training tend to be good stewards. Our contract negotiations are open, so anyone can come and watch – we fought tooth and nail to get that and to keep it. So we announce when sessions are and invite anyone who wants to come. HOLD REGULAR MEETINGS We hold monthly steward meetings and put the agenda out in advance. A lot of people come to stewards meetings for information about their rights, but they also come for the “dish” around the workplace. We agree it’s all confidential – and people respect that. CONNECT PEOPLE TO THE WIDER LABOR MOVEMENT We offer scholarships to make it possible to send new folks to attend conferences – like Labor Notes – and they come back energized.

ACTUAL FUN, NOT FAKE FUN Our primary way of getting activists is by focusing on building community rather than workers’ rights. We’ve had success with having many small social events, about 8-10 people. When people get together, they start talking and get to know each other, then they start talking to coworkers and union reps. We have a monthly movie night, board game night, hiking in The Gorge, going caving, beach clean ups, amusement parks, softball games. Anything members are interested in. Encourage members to do their own events – crafts, drawing, knitting, hangout and talk – and a union representative is there to facilitate. USE ALL THE CHANNELS TO COMMUNICATE Our primary communications are emails – we send at least 12 a month about social events, updates on negotiations, opportunities to meet and greet newly organized workers. We use text blasts for in-the-moment updates on negotiations. We have an active Facebook group that members

and friends can join. We try to keep them up-to-date on labor movement. PAY ATTENTION TO WHAT MATTERS TO OUR MEMBERS We dove into identity politics heavily – the membership was excited about it. A big issue is pronouns and non-binary language. We made it a priority to make contract language non gendered and passed a resolution to make our constitution non-binary. [Editor’s note: this means asking which pronouns people prefer and using those, rather than assuming, and that’s using “they” as the standard, rather than “he” or “she.” Steward Update also uses this standard. Another example: consider also using “siblings” instead of, or in addition to, “brothers and sisters.”] People were excited about it. —As told to Ken Margolies, a longtime labor educator at Cornell’s Worker Institute.