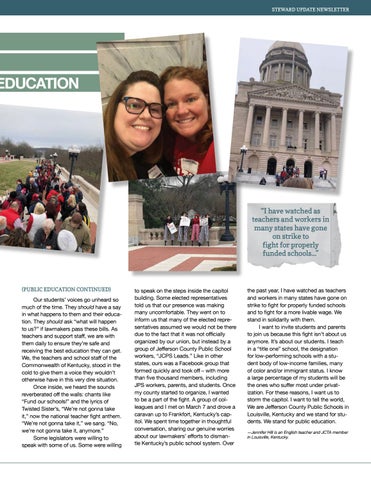 “I have watched as teachers and workers in many states have gone on strike to fight for properly funded schools...”

(PUBLIC EDUCATION CONTINUED) Our students’ voices go unheard so much of the time. They should have a say in what happens to them and their education. They should ask “what will happen to us?” if lawmakers pass these bills. As teachers and support staff, we are with them daily to ensure they’re safe and receiving the best education they can get. We, the teachers and school staff of the Commonwealth of Kentucky, stood in the cold to give them a voice they wouldn’t otherwise have in this very dire situation. Once inside, we heard the sounds reverberated off the walls: chants like “Fund our schools!” and the lyrics of Twisted Sister’s, “We’re not gonna take it,” now the national teacher fight anthem. “We’re not gonna take it,” we sang. “No, we’re not gonna take it, anymore.” Some legislators were willing to speak with some of us. Some were willing

to speak on the steps inside the capitol building. Some elected representatives told us that our presence was making many uncomfortable. They went on to inform us that many of the elected representatives assumed we would not be there due to the fact that it was not officially organized by our union, but instead by a group of Jefferson County Public School workers, “JCPS Leads.” Like in other states, ours was a Facebook group that formed quickly and took off – with more than five thousand members, including JPS workers, parents, and students. Once my county started to organize, I wanted to be a part of the fight. A group of colleagues and I met on March 7 and drove a caravan up to Frankfort, Kentucky’s capitol. We spent time together in thoughtful conversation, sharing our genuine worries about our lawmakers’ efforts to dismantle Kentucky’s public school system. Over

the past year, I have watched as teachers and workers in many states have gone on strike to fight for properly funded schools and to fight for a more livable wage. We stand in solidarity with them. I want to invite students and parents to join us because this fight isn’t about us anymore. It’s about our students. I teach in a “title one” school, the designation for low-performing schools with a student body of low-income families, many of color and/or immigrant status. I know a large percentage of my students will be the ones who suffer most under privatization. For these reasons, I want us to storm the capitol. I want to tell the world, We are Jefferson County Public Schools in Louisville, Kentucky and we stand for students. We stand for public education. —Jennifer Hill is an English teacher and JCTA member in Louisville, Kentucky.